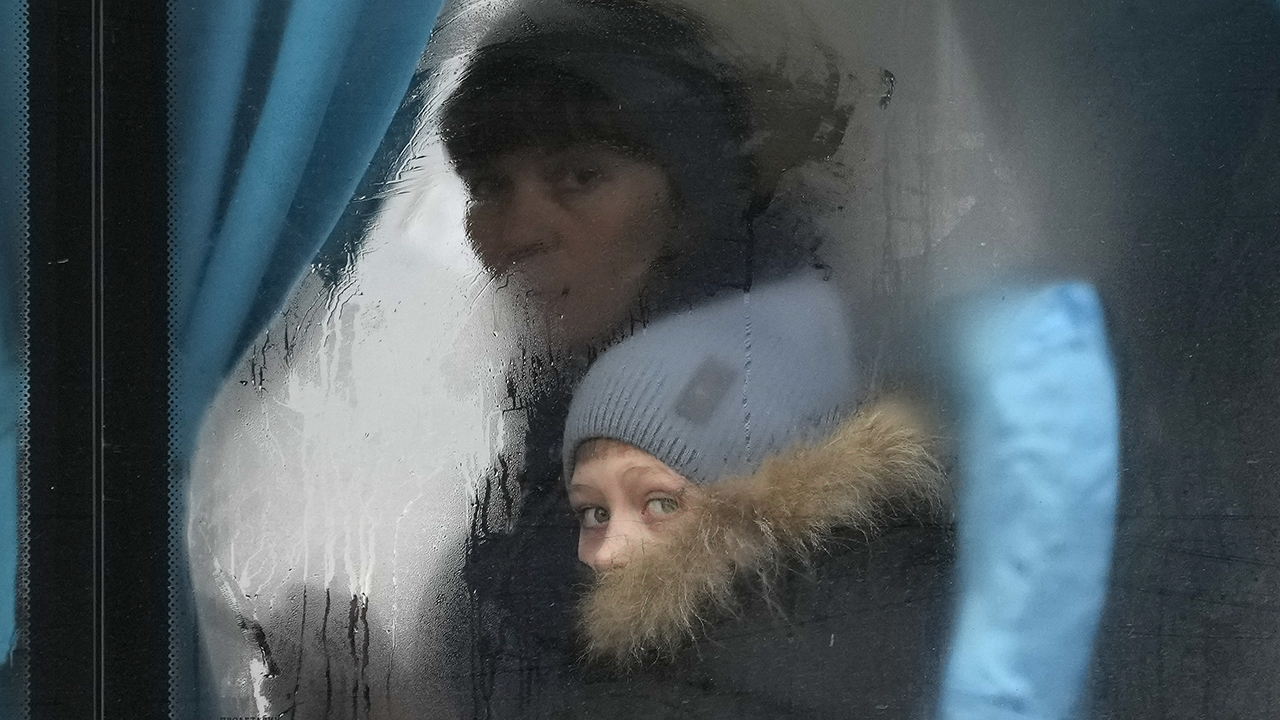 A woman and child peer out of the window of a bus as they leave Sievierodonetsk, the Luhansk region, eastern Ukraine, Feb. 24. — Vadim Ghirda/AP

This story was updated Feb. 26.

Anabaptists around the world are praying for peace and joining widespread calls for an end to war in Ukraine after Russian military forces attacked Ukraine Feb. 24 in Europe’s biggest invasion since World War II.

“The people in Zaporizhzhia have heard explosions from the domestic airport, and there has been some rocket fire, but there is relative silence so far,” said Louie Sawatzky of Winnipeg, who is project director of the Mennonite Benevolent Society and is in contact with staff at the Mennonite Family Centre in that eastern city. “People are in fear but are not paralyzed, and there is not a fatalistic attitude but rather a cautious optimism. But that is probably premature.”

Sawatzky said there was a feeling of disbelief and shock among the city’s residents on the first day of the bombing and shelling, because it was the worst-case scenario.

“This morning there was a different mood, since in their mind there had been a strong initial resistance from the Ukrainian military and civilians,” he said Feb. 25. “There is currently a curfew imposed. Travel is being discouraged. Many civilians are enlisting and others making blood donations. Patriotism is very high.”

Alvin Suderman, board chair of the Mennonite Centre at Molochansk, south of Zaporizhzhia, reported on Feb. 26: “Residents of Molochansk have asked to use the basement of the Mennonite Centre as a bomb shelter. Our staff are stocking the place with some chairs as well as food and water. It is our intention to keep on with our work of helping the people who live in the places once occupied by our ancestors, regardless of ethnicity.”

Roman Rakhuba, leader of Associated Mennonite Brethren Churches in Ukraine, has requested donations of humanitarian aid such as food, clothing, medicine and funds for food, water and shelter supplies. In an email to Multiply, a North America-based Mennonite Brethren ministry with operations in Ukraine, Rakhuba said, “I am very glad that the topic of the Ukrainian crisis is being actively discussed in the international Mennonite community. I am glad that this difficult issue unites us all in prayer.”

Mennonite Central Committee announced it will scale up existing programs in Ukraine and is accepting donations to support its response.

The International Community of Mennonite Brethren hosted an online prayer meeting on Zoom the morning of Feb. 25 and created a webpage to share prayer requests and stories from Ukraine over the coming weeks at icomb.org/2022/02/24/ukraine-prayer-update.

In its call to prayer, ICOMB reported that leaders in churches and projects that work with Multiply and ICOMB have not left their communities and are not planning to do so. All are in eastern Ukraine, in regions near Russian separatist-controlled areas.

Members of AMBCU congregations have shared with ICOMB that they lack fuel, stores are closed and many roads are closed. In general, men under 60 are not allowed to leave the country and are asked to join the Ukrainian army as Russian forces move to surround some cities. Prayers were requested for men from churches that relate to AMBCU who are unarmed chaplains in the Ukrainian army.

“Sisters and brothers, you are in the fire, and our hearts ache,” wrote Mennonite World Conference President J. Nelson Kraybill in a pastoral letter published Feb. 24. “We call on Mennonites around the world, and all who confess Christ as Lord, to join in praying for the peace of Ukraine. We grieve violence and reject efforts by any nation to dominate another. We pray for leaders of Ukraine, Russia and allied nations as they respond to or participate in this crisis.”

Kraybill acknowledged Rakhuba’s call for spiritual and financial support. “We stand in solidarity with you as you cooperate with other denominations and local governments to provide food, shelter and medications to those in need,” Kraybill wrote.

Among the many prayers for peace, the German Mennonite Peace Committee condemned Russia’s unjustified attack on Ukrainian territory and people.

“We call on our congregations to pray for the guns to be silent,” stated the organization. “We call for prayer for those threatened by acts of war, for people on the move to protect their lives and seek refuge in other regions and countries. We call for prayers for political leaders and Russian leadership to stop their attacks. . . . We pray for a future of peace and justice in the common house of Europe.”

Similarly, the Ukrainian Pacifist Movement condemned the military actions of both Russia and Ukraine.

“We call on the leadership of both states and military forces to step back and sit at the negotiation table. Peace in Ukraine and around the world can be achieved only in a nonviolent way,” stated the organization. “War is a crime against humanity. Therefore, we are determined not to support any kind of war and to strive for the removal of all causes of war.”

Uncertainty abounds as civilians observe the extent of Russia’s reach. Thus far, the markets in Zaporizhzhia still have food.

“Families are together where possible and support each other,” Sawatzky said. “There is a strong faith, and I hear over and over the conviction that this too is in God’s hands.”