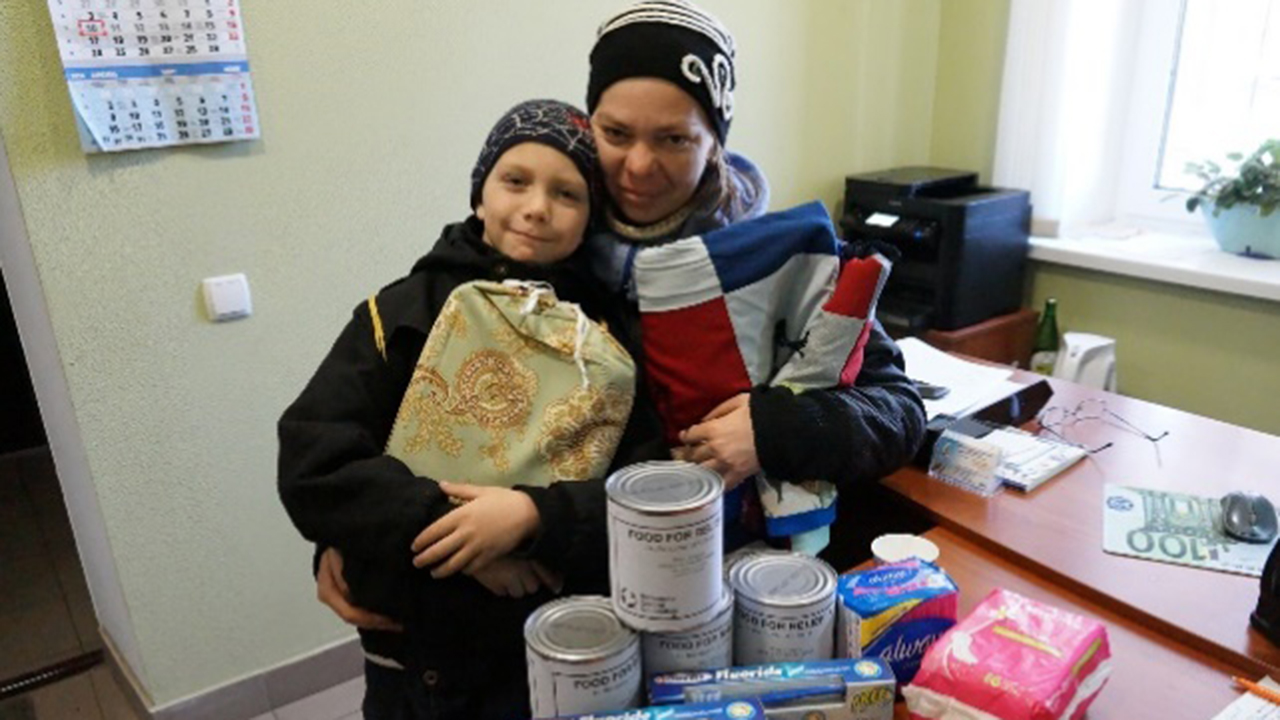 This mother and son, whose names are withheld for their security, received canned meat, comforters and other relief resources from an MCC partner in Nikopol, Ukraine. — MCC partner photo

Mennonite Central Committee is accepting donations to support its response to war in Ukraine.

“Ukraine is experiencing major upheaval, but our partners have supplies ready to help vulnerable and displaced people,” said Rebecca Hessenauer, MCC representative for Ukraine, who is from Philadelphia.

She and three other North American MCC workers evacuated Ukraine on Feb. 13.

MCC will work with local partners to scale up existing programs that support vulnerable people and extending those services to internally displaced populations.

The long-term response will likely include psychosocial support and trauma healing, temporary emergency housing, emergency distributions of locally purchased emergency supplies such as blankets and distribution of food packages.

“One hundred years ago, we responded to crisis in Ukraine,” said MCC U.S. executive director Ann Graber Hershberger. “A century later, we find ourselves walking alongside the people of Ukraine in crisis once again. They are pleading for our prayer and support — and a reminder they have not been forgotten during this time.”

MCC has worked in Ukraine since the organization’s beginnings, opening soup kitchens to provide relief to thousands of starving families. In the early 1990s, MCC renewed efforts to offer humanitarian assistance in Ukraine.

On Feb. 13, MCC relocated all international staff from Ukraine and continues to monitor the situation for staff still in country. Safety and security of staff are of primary concern.

Current MCC work in Ukraine includes projects in relief, peace, health, education, sustainable livelihoods and peacebuilding. Since the beginning of the conflict in east Ukraine, MCC has worked with partners to assist internally displaced people and to build peace.

MCC advocacy offices continue to press the Canadian and U.S. governments for nonmilitary support for peacebuilding around the world.