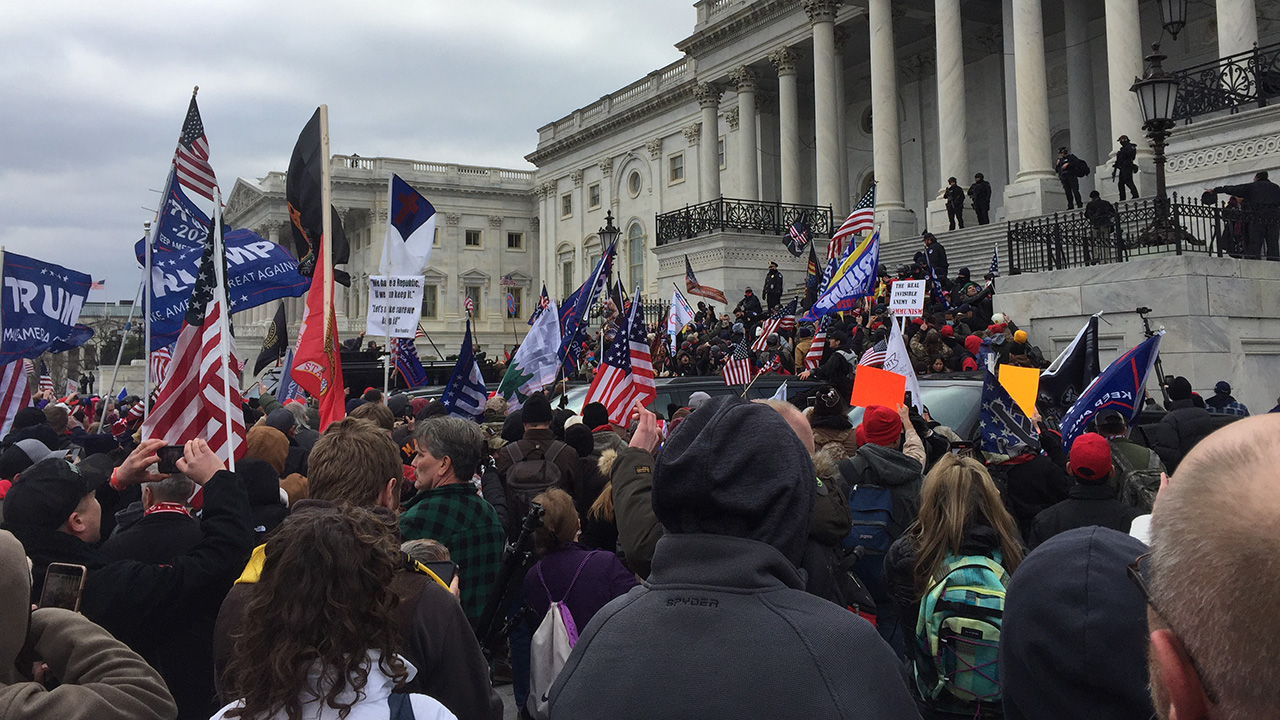 To the crime of sedition, add the sin of desecration to the offenses committed by the mob of Trump supporters who stormed the U.S. Capitol on Jan. 6.

While vandalizing a shrine of American democracy, the rioters profaned what is sacred. But the sacrilege occurred not in destroying government property nor in forcing Congress to flee, deplorable as those actions were.

The Capitol and the rituals performed within it are worthy of great respect, yet these are secular things.

The halls of Congress may be hallowed in the broadest sense, but they are not actually holy.

The act of desecration was the claim that God blessed a violent assault on democracy.

With acts of violence and hatred, those who displayed these words and symbols took Jesus’ name in vain.

The mob that invaded the Capitol also carried a figurative banner — the identity of fearful, grievance-fueled white evangelicalism. Many, but of course not all, members of this influential version of American Christianity hold Donald Trump and Christian nationalism in an idolatrous embrace.

The cult of Trump has poisoned civic and religious life, enabled by the segment of white evangelicals who’ve hailed Trump as the savior of their power and privilege.

As some of the president’s most faithful cheerleaders, evangelical Trump voters made this presidency possible. Now they own the nightmare it became.

The insurrection in Washington played out as the predictable consequence of delusions that have taken hold among an alarming number of American Christians. Conspiracy theories were on full display among the mob on Jan. 6 and at demonstrations the day before.

During a “Jericho March” (imitating the Joshua story) around the Capitol on Jan. 5, people told Religion News Service they believed the election was stolen and the coronavirus was manufactured to influence the election.

Those who spread the lies of conspiracy peddlers like QAnon and Infowars are complicit in slander and bigotry. Christians who turn outrageous frauds into articles of faith profoundly damage their faith’s credibility.

Rioters who carried Confederate battle flags raised the banner of yet another hallmark of Trumpism: racial prejudice. Symbols of white supremacy and the rhetoric of white grievance have been standard fare at Trump rallies for years.

White privilege was on display in the lenient treatment of rioters by police. Minimal resistance to the terrorists at the gates stood in stark contrast to the aggressive force deployed against Black Lives Matter protesters across the country last year. White vandals were treated with deference that peaceful Black demonstrators for justice have not experienced.

Indeed, the fit of rage at the Capitol — orchestrated by hate groups and ­incited by the president — was conspicuous in its whiteness.

“When I looked out at that crowd, I didn’t see any Black people — all I saw was determined and angry white faces,” Rep. Maxine Waters, a member of the Congressional Black Caucus, told The New York Times. “The white people of this country are going to have to take responsibility, and they’re the ones that are going to have to help change the thinking.”

White Christians, including Anabaptists, should hear Waters’ words as a call to action. Glen Guyton, executive director of Mennonite Church USA, warns (see page 13) that Mennonites have “wrapped themselves in the flag of God and country, blindly worshiping political icons. . . . We have, indeed, done violence to one another by using partisan political positions as a litmus test for Christian faithfulness. . . . We must disengage from destructive rhetoric and political ideologies.”

There can be no hiding behind any supposed virtue as a peace church. As Guyton says, this is our problem too.

We can’t dismiss the rioters as a fringe group of radicals. They represent a broad movement that draws strength from Trump’s vast base, which routinely tolerates the incendiary lies and hateful rhetoric of an amoral narcissist.

The healing that must come begins with the recognition that more than a few Trump voters acknowledge his foul character and can spot a lie when they hear one. Trump voters and Biden voters occupy the same pews as sisters and brothers in Christ. We are called to be ministers of reconciliation within the household of faith and beyond it. On page 36, Todd Deatherage offers suggestions for healing: listen more, confess our own sins, treat everyone with dignity and reject the zero-sum war that politics has become.

The mob has dispersed, but cleaning up the spiritual wreckage will take years. Christian complicity in Trumpism obligates followers of Jesus to help repair the damage. We hope many are eager to join in transforming the tone of American politics.