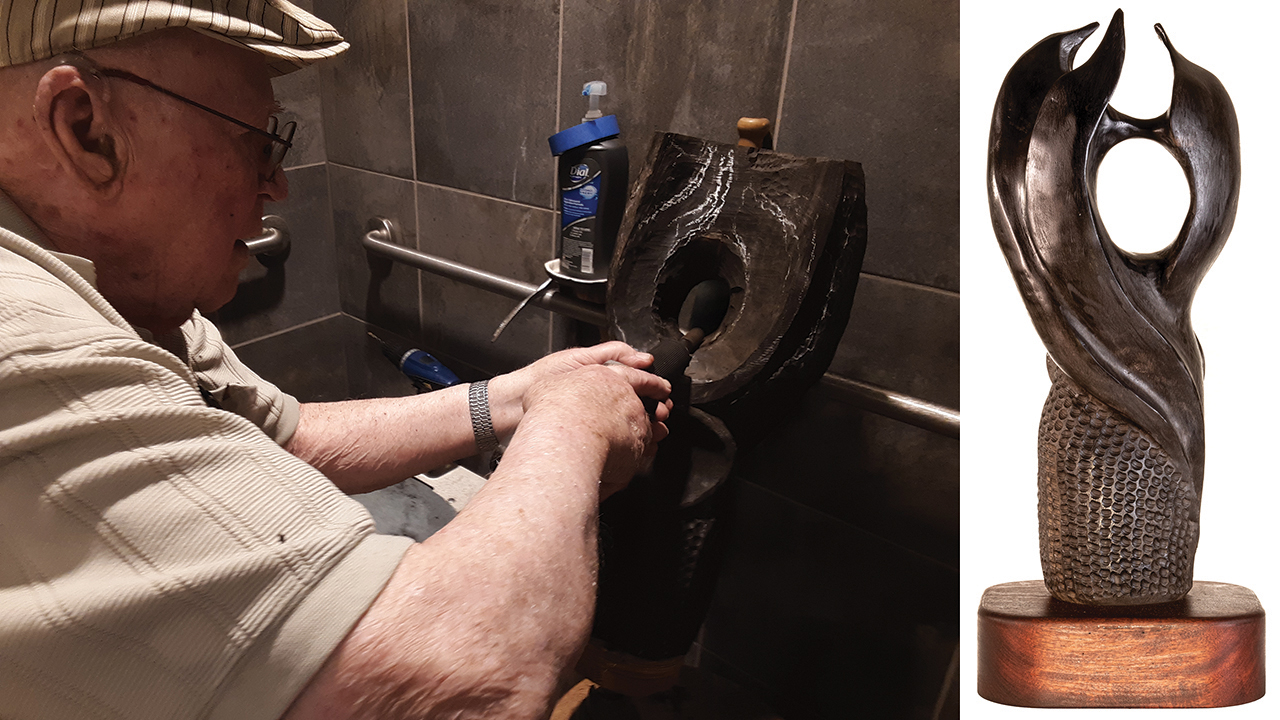 Paul Friesen created this sculpture in honor of Michael J. Sharp, a United Nations peacebuilder who was killed while investigating warring factions in the Democratic Republic of Congo. — Paul Friesen/Jon Friesen

Artist Paul Friesen has often been inspired by world events and people’s experiences. His most recent project honors Michael J. Sharp, a United Nations peacebuilder who was killed, along with colleague Zaida Catalán, by a still-undetermined group in March 2017 as he worked to bring peace between warring factions in the Democratic Republic of Congo.

“I never knew MJ, but the things I read about him in various periodicals are things that really touched me, and I felt very close to his parents in their loss,” said Friesen, who became acquainted with Sharp’s father, John Sharp, through Hesston College and considers him a friend. “I wanted to do something that would honor MJ’s courage, faith, compassion and sacrifice.”

Friesen has a private studio at Hesston College, where he started the visual art program in the 1950s. Pre-pandemic, he could often be found there, turning his inspiration into art. But pandemic restrictions kept him in his home where, to keep his hands and mind busy with creativity, he had to find an alternative.

As a resident at Schowalter Villa in Hesston, Kan., he worked outdoors as long as the weather allowed, but when colder temperatures set in he moved into a new home “studio.” His bathroom shower stall and the countertop in his kitchenette served as his workspace.

“This has become my studio,” Friesen said, motioning to the large cardboard box fashioned to hold tools and catch wood dust. “In my shower stall, I could use my power tools and sweep up the mess. I didn’t have the tools I needed here, so I brought them one at a time as I needed them.”

The wood for the sculpture honoring Sharp is dense and hard. Friesen was given the log in the mid-1960s by friends who had spent time in service abroad. Occasionally, the friend would ask Friesen if he had a plan for the remaining block, but he was waiting for the right inspiration to come along. After Sharp’s death, the original owner of the wood suggested Friesen consider a piece in honor of Sharp.

As he worked, Friesen often meditated on 2 Corinthians 4:7-12, which was the inspiration for the piece, and also the scripture Friesen has chosen for his own memorial service someday.

“ ‘Though we be persecuted, we are not forgotten,’ ” said Friesen in reference to it. “I know MJ suffered, but Paul says here in his letter to the Corinthians, ‘we will not be forgotten. Always carrying in the body the death of Jesus, that the life of Jesus may be manifested in our bodies.’

“Those are the words that followed me throughout this whole year in sculpting the piece. It was my meditation, my invocation when I would begin work on it.”

Since completing the piece, which is now in the home of John and Michele Miller Sharp, Friesen continues to persist through the challenges COVID-19 has placed on his art as he works from his home studio at age 97.

He is working on a piece to give to Bethel College, where he was also instrumental in starting the art program.

“I have a lot to be grateful for,” he said. “I’m glad I still had some inspiration to keep creating even when it’s been difficult.”