Becca Kraybill, for The Mennonite 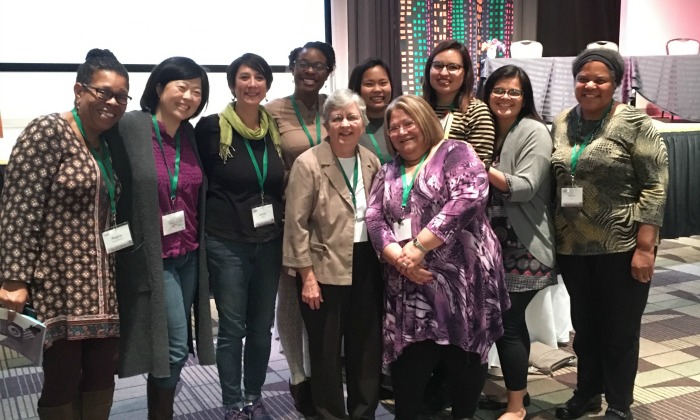 For Sarah Matsui, owning power can be as simple as using the word, “no.”

Matsui, a young adult living in San Francisco, says that part of her “radical understanding of God” has included learning how to care for herself. Recently, this looks like setting “dealbreakers” regarding where she worships and what roles she takes on, Matsui said.

At the Anabaptist Women Doing Theology conference in Leesburg, Va. November 4-6, participants examined what it means to hold power and exist in the power of others. Around 150 women explored the conference’s theme, “I’ve Got the Power! Naming and Reclaiming Power As a Force of Good,” through large group conversations, worship, and breakout sessions.

The breakout sessions covered topics such as poetry; the female body and dress in pastoral ministry; womanist theology; social media and more.

The conference was the second of its kind planned by Mennonite Church USA’s Women in Leadership Project (WLP), an initiative to name and transform sexism in the church. The first conference, held in Leesburg in February 2014, discussed the theme, “All You Need Is Love: Honoring the Diversity of Women’s Voices in Theology.”

Jenny Castro, coordinator of the WLP, said that focusing the theme on power felt timely.

“There’s a sense that especially among Mennonite women, power is something we believe we don’t have, don’t recognize, or we easily deny when really we do have it,” Castro said. “We wanted to ask hard questions about that.”

Power as healing or damaging; empowering or disempowering

Panelists Jennifer Davis Sensenig, Iris de León-Hartshorn, and Wilma Bailey opened Friday’s session, “Naming the Power We Posses,” by describing power as something that can be both positive

De León-Hartshorn introduced “The Power Cube,” a framework for analyzing different forms of power, including power that is visible, hidden, or invisible.

During Saturday’s session, “Owning the Power Within Us,” panelists Sue Park-Hur, Rachel Halder, and Matsui spoke on the power of bearing witness to one’s ancestors, body and identity.

Park-Hur, co-director of ReconciliAsian and co-pastor at Mountain View Mennonite Church in Upland, Ca., introduced the concept of acting as a “remembearer,” or someone who carries the trauma or pain of generations before them.

Matsui shared how she came to the Mennonite church after a previous church experience that became “violent and silencing.”

Halder, who founded Our Stories Untold, a network dedicated to supporting survivors of abuse in Mennonite contexts, shared about her journey after sexual and institutionalized violence and how embodied practices helped her heal.

Todman Moore, co-founder of Unlock Ngenuity, named the risks in being empowered, especially as a woman of color.

Todman Moore shared a story of a male co-worker touching her hair. Though Todman Moore was furious, she used her subversive power to help the man understand why his actions had been inappropriate.

“That’s what it means to use your power to create a space for other people to find their own power,” she said, to a standing ovation.

Graber dispelled myths about sexual violence in the church, based on her experiences editing Our Stories Untold.

Littlewolf, who works for Mennonite Central Committee Central States with the Indigenous Visioning Circle lamented the lack of Native voices in Mennonite spaces and the historical role of Mennonites in Native assimilation.

Not all the same

Despite an all-women attendance, Littlewolf challenged the church to remember the differences present in women across race, class, and ethnicity, and that not everyone can attend such

“For some reason we get in this space with women and we tend to think we’re all the same,” Littlewolf said. “There is value in difference.”

Todman Moore, who attended the 2014 gathering, commended the conference for centralizing voices of color. However, she noted moments where types of power were intersecting in painful dynamics throughout the gathering.

“White women have seen women of color’s voices centralized and tried to decentralize them at this conference,” she said.

Sue Park Hur echoed these sentiments earlier: “These spaces can be risky for someone like me, a woman of color. To have the panels hold a ratio of two to one of women of color really spoke volumes. To process my journey as a Mennonite with my sisters, especially my sisters of color, is validating.”

Park Hur said the importance of having women-only conferences in the church can be huge. “We need to have deeper conversations with one another and create spaces like this,” she said.

Castro agreed. “That women are willing and energetic to engage and bring their gifts is wonderful,” she said. “It’s good for the church.”

Castro said there is no future WLP conference in the works at the moment. To learn more about the WLP, visit mennoniteusa.org/what-we-do/peacebuilding/women-in-leadership-project.