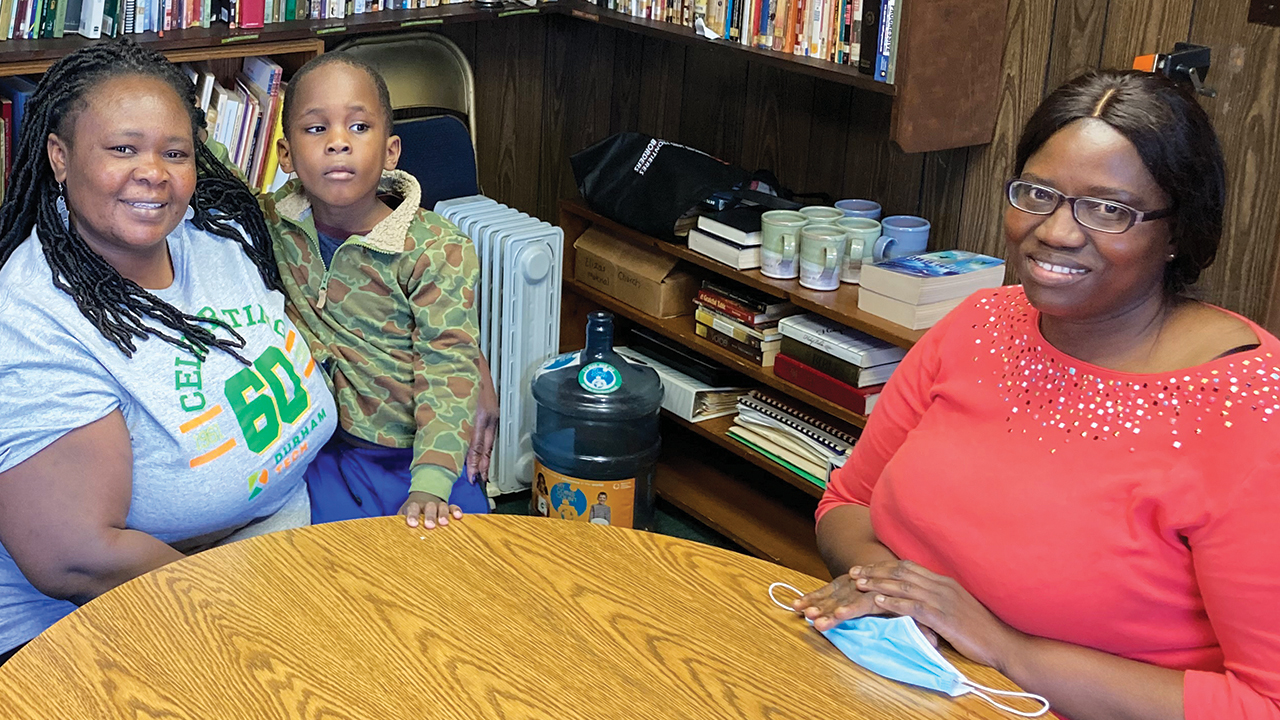 Her middle name, Akinyi, means “dawn,” a customary tag for one born in the wee hours in western Kenya. But little else about Eddith Ogola’s beginnings whispered promise.

One of nine children born to a mother of scarce means, she grew up on an island in Lake Victoria. As with peers in that fishing village, she was given away in marriage at a young age, putting an end to her education.

In time, she followed her husband, Aggrey, to his work in the port city of Mombasa, where the dhows (sailboats), tankers and warships hinted at a world far beyond her island home. There they received news that her husband’s brother in America would sponsor them to join him in North Carolina. With little grasp of what this would entail, she consented to make the great leap, with her husband and teenage son.

Durham, where the family arrived in 2015, had its challenges. Around some corners she met with bitter racism. Like the time she took her youngest child, Eric, to enroll at a church preschool but was brusquely shown the door. She couldn’t help but notice the playground was full of only white children. And poverty most everywhere brings its daily indignities.

But she crossed paths with a Christian woman, Sylvia Daniels, who possessed this virtue: “She took me as I was,” Ogola says. Whether that meant help with childcare or taking an interest in the state of her pantry, Daniels’ friendship met the moment.

Learning that Ogola was a Pentecostal believer, Daniels offered to take her to a Sunday gathering — not of her own Mennonite congregation but a charismatic church of Ogola’s choosing.
When the day came, Ogola told her, “No, take me to your church. I want to come with you.”

That Sunday she was a guest at Durham Mennonite Church. There a bond was knit that led to Ogola and her family living in a quaint log cabin next to the church building where the congregation had met in its infancy.

Ogola had long hoped that her older son, Edward, might be baptized. They had expressed this to a pastor in Kenya but had been turned away, ostensibly because he had been “born in sin.” Bruised by such harsh judgment, she wondered how Edward’s interest would be received by a Mennonite congregation. They found the courage to ask Spencer Bradford, then pastor of the Durham church, who began meeting with Edward. This culminated in a day of belonging, not just with new friends but a family of faith.

About that time, Ogola’s middle name came to bud like the crimson flame trees in the land of her birth. She learned at age 37 that Durham Technical College offered classes for adults wanting to pursue their foreshortened education. These courses awakened for her a dream that outran anything in her beginnings: a calling to serve one day as a nurse.

Something inside whispered, “Eddith, don’t be like Lot’s wife, always looking back,” she says. “I’m running forward, even if my shoes fall off.”

Once embarked on these studies, though, she struggled with daily demands — of her courses, of parenting a special-needs child, of being a homemaker and wife and of her part-time work.

She wondered how her peers were coping. She discovered she was not alone in living on the ragged edge.

Strengthened by shared distress and Ogola’s winsome air, a self-help circle attracted growing numbers of student-parents. The school administration listened empathetically and set out in search of resources that would make it possible for them to focus on their coursework.

Ogola’s leadership skills did not escape the attention of campus authorities. Glad for any measures that might ease the rate of attrition among adult students, they hired her to work with peers who grapple with obstacles beyond the classroom. Retention of these students, often also front-line workers, is a priority. Ogola found herself assigned to the staff of the Department of Student Engagement.

Before long, an array of back-up services — on-campus childcare, food assistance, diapers, tutoring, training in self-advocacy, help with housing and utilities, mental health support — came into play.
Now every Tuesday evening, a student circle meets for encouragement, counsel and practical solutions. The network consists of more than 300 current and former students. Ogola presides gently as her peers seek a path through headwinds toward success and independence.

“What I do there at Durham Tech, listening and then looking for solutions, I learned at Durham Mennonite Church,” Ogola says. “It’s this church that built who I am.”

Marcia Nice, Durham Mennonite’s worship leader, recalls: “When Eddith first started coming to DMC she especially loved the ‘pass the peace’ part of the service, a tradition for years before COVID when we would all get up and move around the room to greet one another, to exchange hugs and say, ‘Peace be with you!’ ”

Ogola felt this acceptance keenly, especially in the face of racism.

Nice observes: “If she says the church built her, maybe it’s just that we loved her when she needed it most with the same love we’ve all received.”

Two women from the church especially were there for Ogola in times of need.

“When Eddith had Eric, the littlest one, Sylvia [Daniels] was there,” Nice says. “One of the nurses at DMC, Sharyn Tieszen, would drop by on her way to work to take Eddith’s blood pressure after the birth. She’d almost died giving birth to him, and Sharyn wanted to make sure she was OK.”

These servant-like traits at work in the community, and now in Ogola’s life, are bearing results, says Christiana Mansaray, Ogola’s campus friend.

“At graduation, we go wild — cannot hold back tears — at watching peers who once faced certain failure but who now step forward to receive recognition on completion of their studies,” she says. “These successes come as gifts from above. And Eddith has played her part.”

Maggie West, Ogola’s supervisor at Durham Tech, says of her ambitions to be a nurse: “She’s remarkable for her powers of empathy, her drive and patient problem-solving with others. Without a doubt, those qualities will lead to her own career success, too.”

That prophetic middle name is ­coming into its own.