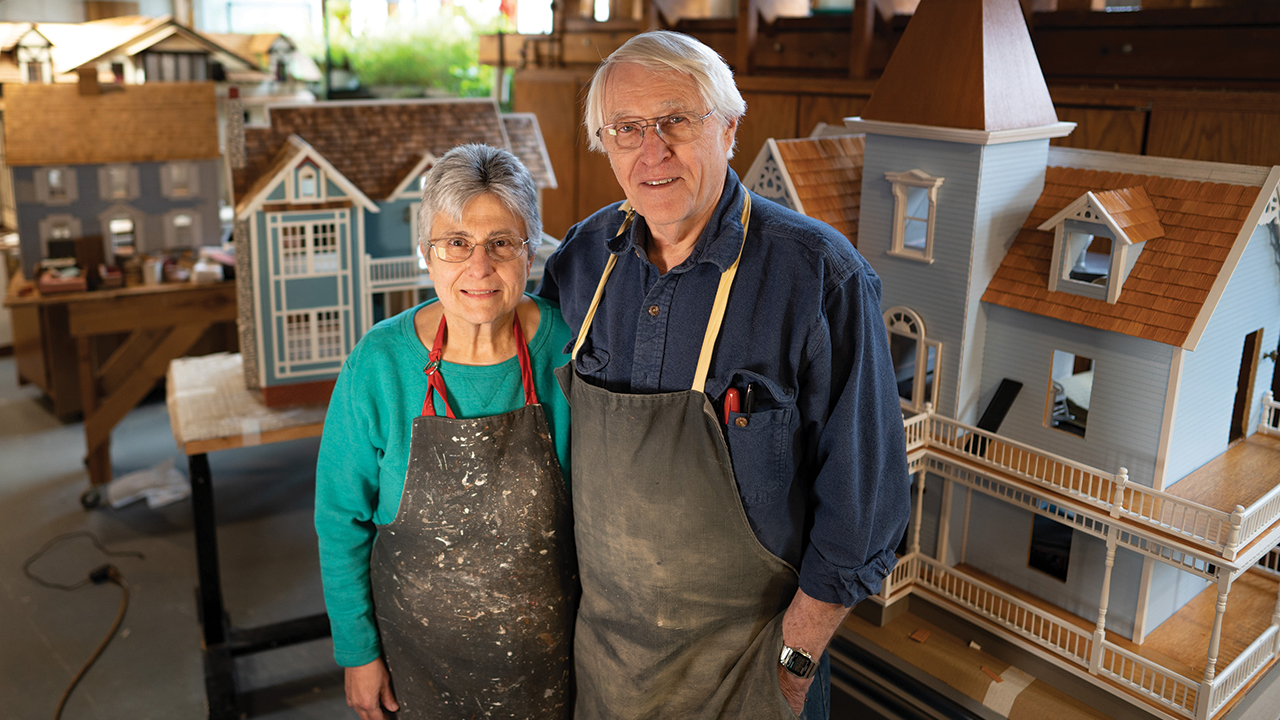 Walk into Norm and Sharon ­Ewert’s basement in Wheaton, Ill., and you might think you stumbled into a dollhouse factory. At any one time, there are 20 to 30 wooden dollhouses in various stages of rebuilding.

How did these two retired professors turn into dollhouse flippers for Mennonite Central Committee?

The story begins with another of their connections with MCC. Students at nearby Wheaton College have been coming to the Ewerts’ home every Thursday night for what they’ve affectionately dubbed the Menno Meal since 1980.

The students had lots of questions about Mennonites and Anabaptism, so Rosemary Wyse invited them over for dinner and included Norm in the dinner invitation.

“It was just informal conversation over dinner,” he said. But it turned into over 40 years of shared meals and conversations.

When Norm and Sharon got married, they took over hosting duties and the gathering grew.

Both have long connections with Wheaton College, Norm as a professor of economic development for 41 years and Sharon as English professor/department chair for 40 years.

Inviting the students into their home was a natural connection and became part of their weekly routine, even in the midst of raising a family.

“The theme was usually talking about the nature of Christian responsibility in the context of the global church,” Norm said. “It was the highlight of the week for us for years. Students would engage and ask good questions. Our guests frequently would say they were inspired by the students.”

At the beginning, the gathering was small, around 12 to 15 students and maybe a faculty member or two. The group grew steadily as word spread. Before the COVID-19 pandemic put the meals on pause in 2020, they were averaging close to 60 students per week, many times with a guest speaker who was sometimes connected with MCC.

The Ewerts always provided the food, but students would come early to help cook or stay later to help clean up. “We did a lot of cooking from the Extending the Table cookbook,” Sharon said. “We had a good time!”

“The students in the group wanted to do something for MCC,” Sharon said. A traditional activity like quilting wasn’t an option, as no one in the group had those skills.

“We had done a lot of building on our house and had scrap wood left over,” she said. “We had a student whose father was a builder, so we got plans for a dollhouse and built one from scratch.”

They knew that a high-quality wooden dollhouse could raise funds for MCC through the Illinois Mennonite Relief Sale auction. That first dollhouse in the late 1980s brought in about $900 for MCC, thanks in part to the auctioneer who was the father of one of the students. In fact, it was auctioned twice as the original buyer immediately donated it back to be auctioned a second time.

Once they built that first dollhouse, the Ewerts were hooked. Now that they are retired, they spend much of their time working on the dollhouses.

“Our house is kind of covered in them,” Sharon added.

They work on two or three at a time so that they can be working on houses simultaneously without being on top of each other. When asked how many dollhouses they have donated in total, they laughed and said, “A lot!” They estimate they’ve donated around 30 or more dollhouses.

Each of the dollhouses is 1:12 scale, meaning 1 inch in the dollhouse equals 1 foot in a full-scale house. The houses end up being 30 to 45 inches wide and about 30 inches tall.

They now rehabilitate secondhand dollhouses rather than starting from scratch. They comb through Craigslist and Facebook Marketplace for listings of wooden dollhouses that somebody never finished putting together or played with many years ago but have been sitting around gathering dust.

Similar to people who buy houses and flip them, the Ewerts start by gutting the old dollhouses. Norm is in charge of structural changes like moving walls or adding rooms. “Sharon does all the finish work to make them look pretty,” he said.

These aren’t basic wooden dollhouses. Each dollhouse is completely renovated and customized — complete with electricity, intricate furniture and lots of fun details.

“Often we’ll print the cover for Simply in Season or Extending the Table cookbooks and put that on the counter top,” Sharon said. “Sometimes we’ll put an MCC relief sale brochure in the mailbox. I often make a bag with a Ten Thousand Villages stamp on it and stick it in the house somewhere.”

They’ve gotten their family involved. Their son uses his 3D printer to help make special pieces that are hard to find. Their 5-year-old grandson has begun helping them work on the houses. And their 2 1/2-year-old granddaughter is always eager to test the dollhouses and accessories.

The Ewerts have found that the people who sell or donate the dollhouses appreciate seeing them get love and attention.

One house Sharon found on Craigs­list was from a woman whose mother had bought a dollhouse kit for the two of them to work on together as they processed the death of the girl’s father. But they never finished the dollhouse.

“She was delighted that we were effectively finishing her mother’s project,” Norm said. They will send her pictures of the finished project before donating it, as they do with each of their rehabilitation projects.

The Ewerts have begun donating the dollhouses beyond Illinois to sales in Indiana, Kansas, Iowa and Pennsylvania. Every year they donate one to the local Ten Thousand Villages store for its fundraising raffle.

Sometimes the donations come full circle. Two years ago they contacted a seller on Craigslist about a dollhouse that looked exactly like one they had donated to the Illinois Relief Sale in 1992.

“He called the next morning and said when he read our email, the hair stood up on his neck. He said, ‘If you want this back, it’s yours,’ ” Norm said. “It was still in great shape. We just had to make a few repairs, and we took it back down to the sale.”

The Ewerts say it’s a bit stressful watching the dollhouses get auctioned. The highest went for $2,500; others have averaged $500 to $800.

In his professor role, Norm helped start “Human Needs and Global Resources,” a program that places students in international internships with developmental organizations for six months. During visits to those locations, they would often interact with the work of MCC and Ten Thousand Villages.

The Ewerts helped establish the Ten Thousand Villages store in Glen Ellyn, Ill., in the early ’80s, and Sharon serves as the board chair. Many of their family members have served with MCC, so they feel deeply connected with it.

“We believe in what MCC does,” Sharon said. “We’ve seen MCC work around the world, and we absolutely want to support that.”

If you have a second-hand dollhouse, the Ewerts are always looking for more. Contact the MCC Great Lakes office at 574-534-4133 or greatlakes@mcc.org.