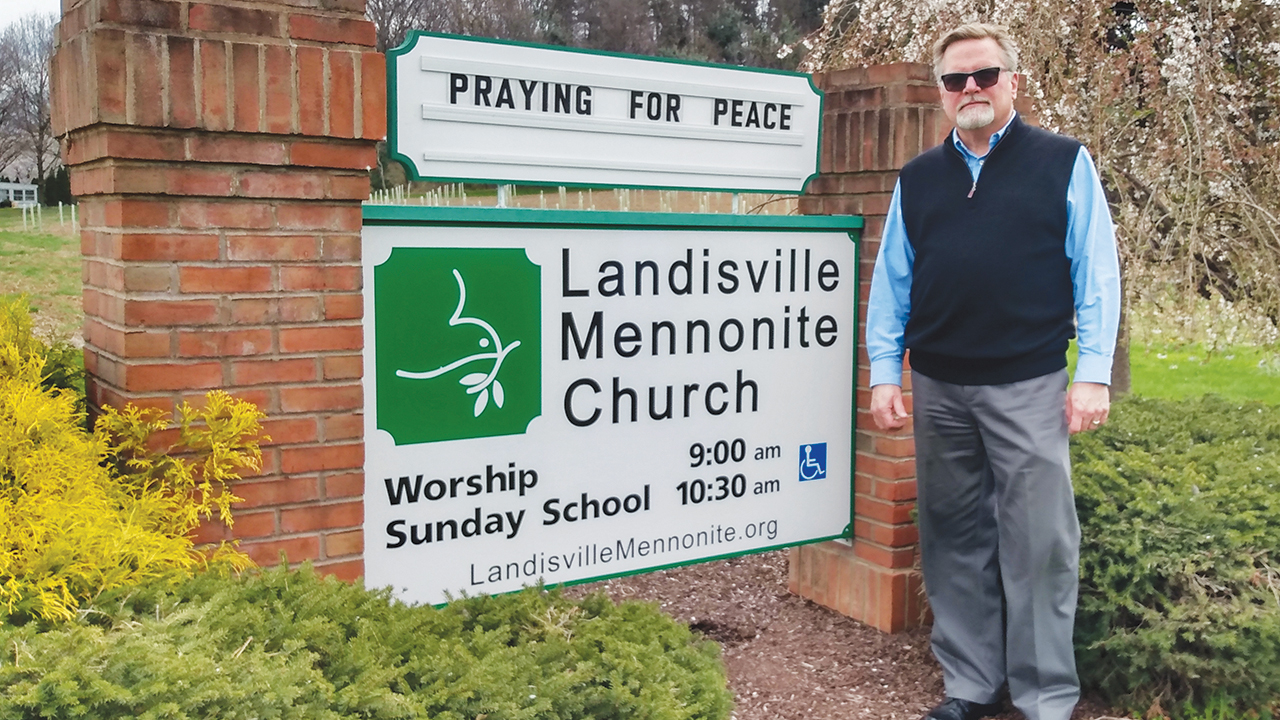 Ron Adams is one of the pastors at Landisville Mennonite Church in Pennsylvania. — Ron Adams

When I was pastor of Madison Mennonite Church in Wisconsin, I got emails from students at a local Catholic college. They’d been assigned to write a paper on an alternative form of Christianity. They asked if they could join us for a worship service. Consider it research.

Then came the inevitable questions. Were non-Mennonites allowed? Did they need to dress a certain way? Any other peculiarities they should know about?

I appreciated their desire to be respectful guests. I let them know they were welcome and could dress however they wished. Then I told them our service would likely not be all that different from what they were used to.

I sometimes detected disappointment with my answers. I guess we Mennonites weren’t so peculiar after all.

Mennonite, huh? I confess I never got tired of the questions. Coming from Lancaster County, Pa., where I was surrounded by Mennonites, then moving to Madison, where I was part of a tiny minority, I had to get used to explaining what my corner of the Christian world was like.

I came to enjoy it. I especially liked that, when explaining Madison Mennonite, I was able to present a progressive form of Anabaptism. Call it the privilege of being the only Mennonite game in town.

I became a Mennonite as an adult. I did so voluntarily and with enthusiasm. The name signified a set of theological and social claims that resonated with my developing worldview.

My first pastorate was at East Chestnut Street Mennonite Church in Lancaster, Pa., from 1998 to 2011. In that time, I related to two clergy groups. The first was composed of my Mennonite colleagues in city congregations. The other was ecumenical.

As someone drawn to becoming a Mennonite, it was weird to discover that some lifelong Mennonites were ashamed of the label or found it to be a hindrance to church growth.

After all, in the U.S. context the word Christian is at least as compromised as the word Mennonite. In the broader culture, the word Christian may signify rigidity, right-wing politics, misogyny and white supremacy. I’ve yet to hear anyone make the case for abandoning it for the sake of being more seeker-friendly. On the other hand, some of us feel the word Mennonite is so burdened by baggage that it needs to be discarded.

I’m not judging those who feel that way. I know context matters, and congregations must reckon with the uniqueness of their settings. Images of horses and buggies, Plain clothes and men and women separated by the middle aisle can be difficult to get past.

While it didn’t take me long to discover that not all Mennonites look, act and think alike, I’m sure there are folks who are not inclined to explore. If a congregation knows the word Mennonite prevents people from joining their community in hopes of walking after Jesus together, then by all means they should drop it.

That being said, I still wonder. In my many years in pastoral ministry, I’ve never met anyone who expressed discomfort with the word Mennonite. Other than Mennonites, that is.

Confusion? Yes. Stereotyping? Yes. I cannot count the number of times I’ve said things like, “Well, we’re not that kind of Mennonite.” Or, “Not all Mennonites look and live like that.”

If anything, the very oddness of the word and the images it evokes have served as conversation starters. I suspect Episcopalians, Quakers and Lutherans have to explain themselves, too, when asked about their peculiar take on Christianity.

If that’s the case — if a certain amount of defining and explaining is part of every decision to enter a relationship with a congregation — then of course we Mennonites have some explaining to do. In fact, that explaining can be a gift. And not only to the one on the receiving end.

Maybe it’s not so much the word Mennonite that gives people pause. Maybe it’s the fact that we are reluctant to unpack our stuff in front of them, to own up to our mistakes and admit how we’ve changed since 1525. And to do so while also demonstrating the calling we’ve been given as Mennonite followers of Jesus.

Rather than jettison the name, its history and its baggage, suppose we accept the need to show and tell the world around us who this particular group of Mennonites is? Explanation akin to what Peter talked about — to share the reasons for the hope within us (1 Peter 3:15).

And not only some generalized hope, but the hope specific to us as a congregation. What does it look like? Where does it come from? How do we live out of and into that hope?

In one congregation it’s the proclamation of the extravagant love of Christ revealed in a weekly meal shared with our neighborhood. In another, it’s the joyful affirmation and blessing offered to our LGBTQ kinfolk in the name of Jesus. In another, it’s the planting of trees and other acts of creation care done out of love for the God who makes all things new.

Every Mennonite congregation is uniquely gifted to follow the movement of the Spirit in their context. So, Mennonites here, there and everywhere are advocating for the poor, standing with the marginalized, acting against racism, resisting militarization and speaking up against hate in all its forms.

We are living out the holy combination of word and deed, proclamation and practice, that is inviting to those seeking to follow the way of Jesus, even as it offers healing and hope to the world around us.

It is up to every congregation to discern its own course. It is every congregation’s responsibility to look inward and outward to discover what God is doing among and around them. Every congregation is free to act on that discernment, even if it does so by dropping or retaining the word Mennonite. After all, faithfully acting on that freedom is a very Mennonite thing to do.

Ron Adams is one of the pastors at Landisville Mennonite Church in Pennsylvania.