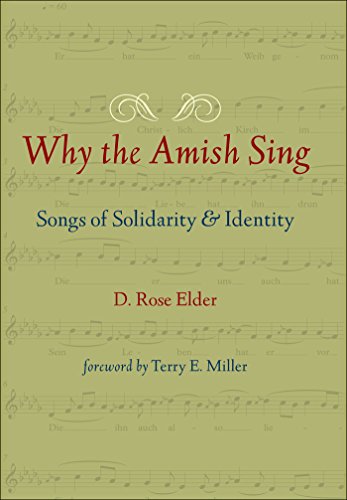 In Why the Amish Sing, D. Rose Elder considers the role music plays in the life of Amish people, providing as well an in-depth analysis of songs used by the Amish, and the ways those songs inform Amish thought and practice. 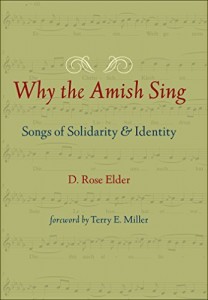 Although some of what Elder writes might seem more interesting to those with an extensive musical background, much of Why the Amish Sing offers a readable, thoughtful examination of Amish life — one that even those with only a passing understanding of music (or, for that matter, the Amish) will find intriguing.

Elder’s authority as an ethnomusicologist clearly informs Why the Amish Sing, as does her use of ethnography as the basis for her study. In researching Amish music and singing, Elder interviewed 56 Amish at auctions in several Ohio communities and followed up interviewing some of these people in their own homes, with their families.

Elder also observed a number of Amish schools, attended some sings and what she called “worship events.” She had Amish friends read her work in draft form, which precipitated further discussion and helped shape her final research findings.

The result of this ethnographic research is a text that allows us to understand the many ways music and singing shape the Amish experience, in worship and in daily life: their familial relationships, their educational instruction and the sustenance of their communities.

Elder’s analysis of Amish music not directly related to worship is one of the most valuable aspects of Why the Amish Sing. She shows how music is an integral part of daily life for most Amish people.

Amish children are introduced to singing as infants, cradled in their parents’ or grandparents’ arms. This early singing begins to teach children the “grounding principles, rules and expectations, values and norms” that shape their communities. Even songs that seem simplistic and silly may have significant subtexts. A rhyme about a woman buying a pig might, Elder writes, have hidden in its symbols the history of the Middle East.

Instruction through song continues as children enter formal schooling. Elder observed this in her visits to schoolhouses, where children spend some part of every day in song.

As teenagers, Amish gather at youth sings where, Elder says, teenagers “rehearse their identities, practice Christian devotion, bond with peers and prepare for full-fledged Amish adulthood.” Such sings are not always limited to the youth within one district. This becomes another way for teenagers to socialize with peers they might not otherwise see.

A significant part of Elder’s text addresses songs of worship and, specifically, the use of the Ausbund, a collection of songs for worship. Readers familiar with Amish worship services and the Ausbund may find this section a review of sorts, though Elder does an excellent job of considering the history of the hymns and the significance of their lyrics to early Anabaptists. She also explores the hymns’ transmission over several centuries in terms of their tunes, many of which remain little changed today.

The final chapter considers how Amish singing has changed. The Amish “sing for their survival” — to sustain a centuries-old culture, even as they “adjust their sing­ing, like other aspects of their culture, to meet the demands of living in a postmodern world.”

Elder notes that some Amish communities have recently taken renewed interest in the Ausbund and that “men are meeting to practice the worship songs to be able to lead them more securely.”

Also, more tunes have made their way into the Amish singing oeuvre, and, as a result, some texts have been changed as well. Evangelicalism’s influence can be seen; the song “Jesus Loves Me,” Elder writes, reflects this influence, as it “represents an emphasis on a personal relationship with God.”

Despite these changes, Elder affirms that much as other aspects of Amish culture remain constant, so also do the primary aspects of Amish singing. The tradition of singing “preserves an Amish identity but enlivens and enlarges it, helping the community respond to change with both flexibility and continuity.”

Elder works hard to ensure that those with no musical background will understand her thesis as well as the supporting evidence. For the most part, she succeeds, though she sometimes veers into language and concepts that might be unfamiliar to those not versed in musicology. Readers interested in the Amish and in music will enjoy Elder’s book.