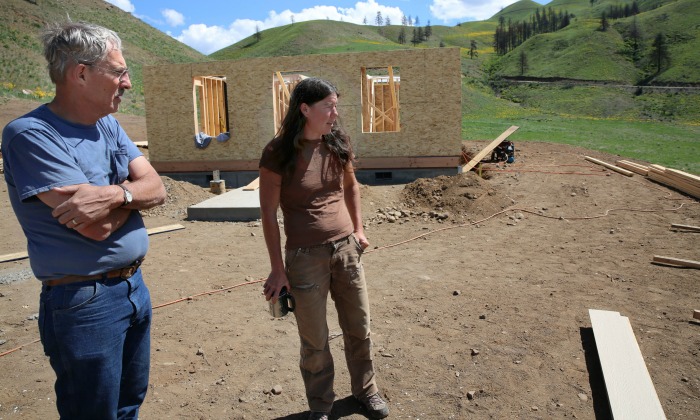 The first wave of wildfire missed Michelle Carfagno’s homestead up in the brushy hills above Twisp, Washington.

The second rolled down a ravine and engulfed the two-tier structure.

Carfagno had spent years creating the environmentally friendly house out of logs she’d fetched from a nearby forest and peeled with a drawknife. “It was a work of art,” the river guide recalls wistfully. Leaving was wrenching.

As the inferno closed in on July 18, 2014, Carfagno and her neighbors fled for their lives down the steep gravel road.

Wildfire is a sad, familiar story in the West. But there’s a panicky modern spin: Fires are burning bigger, hotter, longer. Climate scientists say they could foreshadow worse nightmares to come.

Carfagno’s fire, the Carlton Complex Fire, was the most terrible in living memory. It scorched some 256,108 acres and destroyed hundreds of homes in central Washington.

More than 30 miles down the Methow River from Carfagno’s round log home, Pateros Mayor Carlene Anders remembers the wind howling at 70 mph. Fire hoses dissolved in the 100-degree temperatures. Ten percent of the little town was lost.

“The drought, the high heat, the winds–in 30 years I had never experienced that kind of fire,” says Anders, a firefighter and pioneering female smoke jumper in the 1980s. You got a sick feeling, “Oh my gosh, what are we gonna do?”

Such rogue fires are shocking, but scientists say the catalysts have converged like trails to a spring. The cataclysms are happening for clearly understood reasons.

A century of fire suppression has stoked the mountains with tinder. Drought has dug in across the West this century, drastically shrinking snowpacks and stream flows and desiccating soils. Insect pests have flourished. Countless swaths of dead, gray trees now stain Western forest vistas.

Atmospheric warming is supercharging such trends, according to studies by NASA and Columbia University’s Lamont-Doherty Earth Observatory.

Climate researchers at these and other institutions warn that unchecked human carbon emissions dramatically increase the chances of a decades-long Western “megadrought,” unseen for 1,000 years.

Even in the short term, predicts Drew Peterson, a U.S. Forest Service wilderness ranger based in Bend, Oregon, wildfires will worsen.

The Lancaster, Pennsylvania, native has, for the past eight year,s grubbed out fire containment lines with a Pulaski axe, coordinated fire crews and radioed in smoke jumpers throughout the West.

“It’s an all hands on deck deal,” he says of the smoky, dirty, rewarding work. Still, “We can’t always fight. We aren’t big enough to control some of these incidents in the manner we used to.”

That’s global warming in your face, Peterson adds. “You can see it, smell it. Some of your favorite places can be changed in an instant.”

The situation dictates a “new norm” for firefighters, he adds. “We cannot expect anything, and we can’t rely on some of our statistical data and forecasting as we have in the past… fires are burning hotter, larger, and fire season has increased by a month on each end.”

Peterson says aggressive, speedy fire fronts can throw embers a mile in advance. Many towns around the West sit a spark away from disaster.

That bodes ill for places like Twisp and Pateros, on the dry eastern side of the Cascade Range.

But there’s at least some good news.

Says Peterson: “I think we are getting smarter and realizing that excluding fire from our forests for the last 100 years has played a major role in the intensity of the fires we see today.”

Prescribed burns to cut fuel and bring back fire to the ecosystem are helping, he adds, “but we need to continue this work and expand it across the West.”

The Okanogan County Long Term Recovery Group and other advocates are pushing the government to help local departments quell small fires before they blow up.

Meanwhile, homeowners are being taught to guard against fire by minimizing brush and trees next to buildings. Less combustible construction material is being used.

Up in the Twisp hills, Mennonite Disaster Service workers from Oregon, Washington and Canada are building a new house for Michelle Carfagno. They’ll cap it with a fire-resistant metal roof and wall it with HardiePlank fiber cement siding instead of wood.

After 2014 and 2015, she and her neighbors hope the smoke and flames never do. “We’re all kind of tired of fires,” Carfagno says.