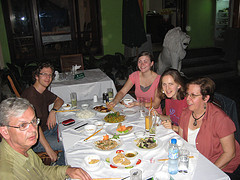 On Saturday evening, Dale and I sat down for supper with four members of the Mennonite Central Committee based here in Hanoi. Rachel, Anna, Brent and Ruth told us stories from their time here that provided a wonderful window into the work of MCC in this country as well as daily life here in the city.

Three of the four workers were with MCC’s SALT program, which has been placing volunteers in Vietnam since 2001. I’ll introduce you to each of the 3 Salters and co-country director Ruth and share some of their stories from their work. For the SALTers, their name links to their blog for more details and stories from their life in Hanoi.

Anna Batcheller is from Petersburg, NY and works with Action for the City. They sponsor and manage a variety of programs that work at “bringing people together for livable cities.” One of the initiatives Anna described worked with children living along a polluted river. The project, called Photovoice, distributed simple cameras to each of the children, trained them and then put on a show showing the photographs that resulted. It also helped members of the community think about how they could take action to clean up their river. Two other programs she described were a film called “Hanoi Speaks” and a project called “Just Massage” which works with  blind youth learning to do massage–a traditional occupation for sightless persons in Vietnam. You can read more about both of these programs on the Action for the City programs page.

Brent Durksen is from Winnipeg, Manitoba. He works for The Gioi Publishers, (translation is”The World”) where he edits English translations of Vietnamese articles to make them more readable. This includes everything from Vietnamese government reports to all the articles in a monthly magazine called Vietnam Cultural Window. Brent also does excellent photography work. See his gallery for photos that bring to life some of the many faces of MCC work here in Vietnam.

Rachel Derstine is from Blooming Glen, PA. She started in sociology at Goshen College the fall after I graduated from the same program. I was happy to discover she was following the long tradition of GC So/An grads putting their degree to creative use. Her work is with the National Committee For the Advancement of Women in Viet Nam. The organization serves as a liason with many international organizations working on women’s issues. Rachel also works halftime editing English translations at The Gioi publishers.

Last, but not least, is Ruth Jantzi from Bronx, NY. She and her husband Lowell (who was traveling while we visited) are MCC country directors for Vietnam. They have lived and worked in Vietnam since 2003. Their term ended in January, but they have extended their stay while waiting for a replacement. For those of you familiar with MCC’s work, you know that country director’s do a little bit of everything, coordinating all of MCC’s programs in the country, which include . Dale talked with Ruth more than I did during the meal and said that along with a lovely New York accent, she has a real empathy and resonance with Vietnam after her many years working here. I was also embarrassed (and flattered) to discover that Ruth is a regular reader of this blog. Ruth, if you’re out there, feel free to leave a comment filling in some of the gaping holes in my account.

Ruth and her husband live in their own home, but each SALTer lives with a host family in Hanoi.They described the maze of alleyways that connect the many hows packed together in the neighborhoods they live in. They also told me about the maze of language they’ve learned to traverse. For example, instead of a simple “you” the second person pronoun in Vietnamese changes completely depending on your age relative to the person you are talking with. So, when talking with each of the following groups there’s a different pronoun used:

The one easier aspect of the language is no verb conjugation. Nonetheless, I have immense respect for SALTers here in Vietnam who are learning the language in less then a year.

The supper wouldn’t have been complete without the inevitable “What was the most difficult part of your time here?” Their answer was surprisingly simple: the winter. From January 8 through mid-February they did not see the sun at all. When it finally did arrive, it was only for a few minutes. Temperatures dropped to the low 50’s and 40’s. Does that sound tame compared with winters in the US? Imagine braving it with no indoor heating. For a detailed account of what this is like, see this post by Anna on her blog.

I learned much more then this about Mennonites, the church and the government here in Vietnam during our conversation, but my time in the internet cafe is running out, so I’ll have to save all that for another day.