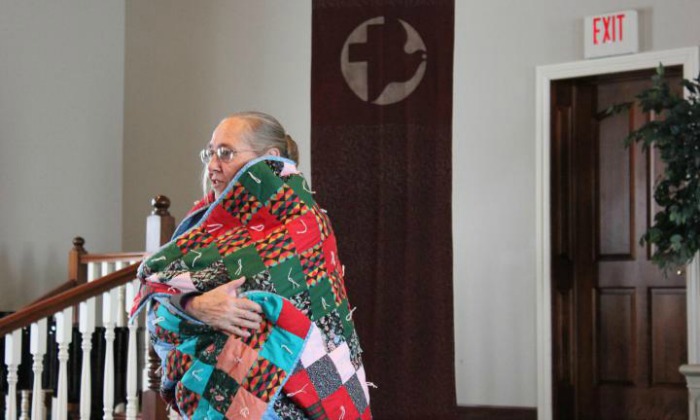 Photo: Johanna Sutter, who received MCC material resources as a child growing up in Germany following World War II, has dedicated much of her time to volunteering at the Material Resource Center at The Depot in Goshen, Ind. Because of her dedication, she won the national Journey Award from Everence which garnered a $5,000 donation to MCC. MCC Photo/Jennifer Steiner.

Johanna Sutter of Goshen is the recipient of this year’s national Journey Award from Everence. Everence is the stewardship agency of Mennonite Church USA.

Created in 2001, the Journey Award highlights what people of faith are doing as stewards of their God-given gifts. This award recognizes Sutter for her dedication to volunteering at Mennonite

Central Committee’s Material Resource Center in Goshen, where she has logged countless hours since retiring from her teaching career about 15 years ago.

“It’s hard to say in exact hours, but MCC Great Lakes would likely have to hire a half-time person to cover all she does as a volunteer,” said Nadine Zook Miller, material resources coordinator for MCC Great Lakes.

Sutter received a Christmas bundle of supplies from MCC as a child in Germany in the aftermath of World War II. Touched that people from so far away cared about her well-being, she decided she wanted to be like the people who provide hope and comfort to those in need.

As a part of the award, Everence made a $5,000 donation to MCC, the charity of Sutter’s choice. Everence presented Sutter with the award at her home congregation, Assembly Mennonite Church, Goshen, on Sunday, Sept. 18.

Everence also announced regional Journey Award honorees, who can make $500 donations to the charities of their choice. They are: