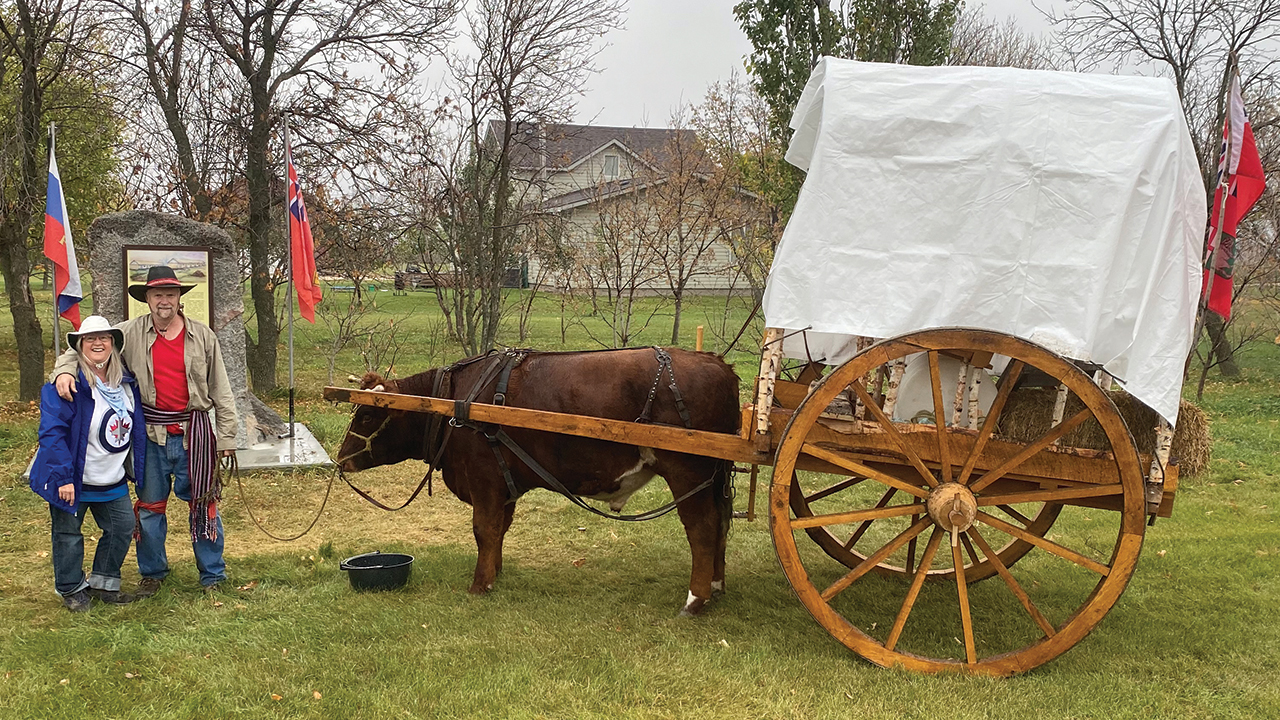 Patty and Terry Doerksen with their oxcart and ox, Zik, at the site of the former immigration sheds near Niverville, Man., that sheltered Mennonites after they arrived in the province in the 19th century. — John Longhurst

For Manitoban Terry Doerksen, a Canadian Thanksgiving pilgrimage by oxcart in October was a way to say “thanks” — to God and to those who helped his Mennonite ancestors who came to the province from Russia in the late 19th century.

Through the trip, from the junction of the Rat and Red rivers where his ancestors landed in 1875, Doerksen wanted to offer thanks to “Jesus, the Good Shepherd, who led a little flock from Russia to Canada and continues to shepherd their descendants.”

He also wanted to show his gratitude to the Métis people of the province — descendants of the French and Scottish fur traders who married Indigenous women in the 1700s — who helped the Mennonites when they arrived.

And he wanted to acknowledge the Indigenous people who were forced from their traditional land to make way for the new settlers.

The 59-year-old electrician set out Oct. 8 with his wife, Patty, 61, for the three-day, 21-mile trip to Blumenort in southern Manitoba, traveling at a top speed of 1.8 mph behind their ox, Zik.

The pilgrimage was a way to “experience, in a small way, what my ancestors did in coming to a new land and to thank the Métis who met them with carts to help them get to their new homes,” Doerksen said.

Doerksen’s Mennonite ancestors, among them 10-year-old Gerhard ­Doerksen — his great-grandfather — arrived at the Rat River by paddlewheel steamboat from the United States. The spot is now known as Menno Landing.

The homemade oxcart cost about $800 for materials. Made by a friend, it took about 200 hours to make and was built following traditional Métis plans — with an old pew from a Mennonite church for a seat. “Complete with the hymnal rack on the back!” Doerksen said.

“I like history and am always interested in what people experienced in the past, what life was like for them,” he said of his choice of garb.

Doerksen used the time spent traveling to reflect on the journey of his ancestors and to pray for the communities he passed through.

One thing that stayed on his mind was how the arrival of his ancestors impacted the Indigenous people who originally occupied the land.

Doerksen, who grew up Mennonite but is now a member of a nondenominational congregation in Winnipeg, is grateful for the way Canada welcomed his ancestors, giving them land and freedom to follow their faith.

But he also knows their arrival came at a cost to the original inhabitants, the Anishinaabe.

“The Anishinaabe were the caretakers of this corner of the country,” he said. They were forced to choose a new place to live in the province.

As a result of this displacement, “my feelings are deeply mixed,” he said.

Today, Doerksen is thankful for “a wonderful place that I can call my home. Yet I am so sad that my gain came at such a loss to those entrusted by our Creator as stewards of the land.”

One day he hopes to more fully acknowledge his debt to the Indigenous people of Manitoba. But now all he wanted to do through the Thanksgiving trip was to say to them, to God and the Métis, “from the bottom of my heart, Miigwech,” Anishinaabe for “thank you.”