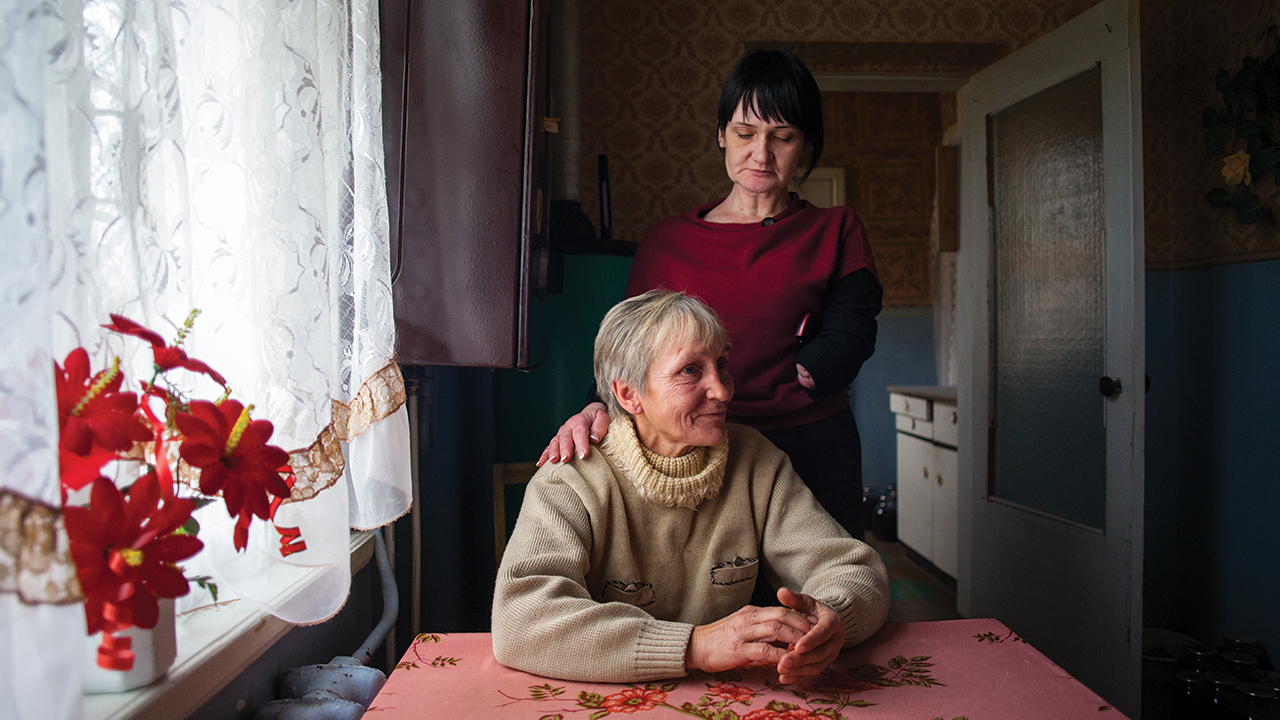 For 100 years, Mennonite Central Committee, through its broad Anabaptist constituency in the United States and Canada, has been compelled to share God’s love and compassion.

Throughout this centennial year, MCC supporters and workers have reflected on how our identity as followers of Jesus motivates our charity and service.

The phrase “in the name of Christ,” which sums up this motivation, spread widely during and after World War II when MCC’s work stretched across ­Europe and aided thousands of families devastated by war.

In London, England, MCC workers Eileen and John Coffman were sharing clothing from MCC with families who had lost their homes and were living in underground shelters.

In April 1941, the couple wrote to MCC leaders to say that a label on donated clothing with a “little slogan such as ‘In the Name of Christ’ [might] be useful in promoting the cause of Christ, as we administer the clothing which is made and donated by our people.”

Soon, “in the name of Christ” began to appear not only on clothing but also on relief supplies such as comforters, Christmas bundles and cans of meat.

Through this simple phrase, MCC’s identity and reason for being have reached millions of people — not only in Europe but in countries throughout Africa, Asia, Latin America and the Middle East.

In this final article of a series marking MCC’s centennial, we remember some other ways we’ve experienced MCC following Jesus into the world.

In May 2014, I visited MCC partner Help Channel Burundi, a Christian ministry in Burundi reaching out to people in need through large-scale relief and development projects. Some 90% of Burundians are subsistence farmers living in poverty with little formal education.

A decade before, at the height of Burundi’s civil war, MCC helped to sponsor a Bible study with Intervarsity Fellowship. From this Bible study, 15 students decided they wanted to respond together to what they were reading in Scripture about being part of Christ’s ministry of reconciliation in the world. Help Channel Burundi was birthed.

In 2014, Help Channel staff were distributing MCC supplies to families displaced by drought. “These are cans of meat from Christians in North America who love you,” Cassien Ndikuriyo, Help Channel director and one of those Bible study students, told the people gathered.

Working through a network of local churches with help from partners like MCC, Ndikuriyo said, “We want to share the gifts the Lord gave us with the most vulnerable people among us.”

Through MCC, in a normal year, 30,000 people help produce canned meat for people in need around the world. Thousands more volunteers make quilts and comforters; put together and pack relief, hygiene and school kits; and volunteer in MCC thrift shops and with relief sales and material resources centers.

“In the name of Christ” is more than a phrase on a can of meat. It is an understanding that shapes how we work with partners around the world.

While visiting MCC projects in western Guatemala in 2006, I met Juan Pablo Morales from the local Catholic diocese, an MCC partner in income-generation projects. His work helped keep people from needing to migrate to the U.S. or elsewhere.

As we hiked a treacherous path to a remote village to learn about a fish- farming project, Morales said to me with deep conviction, “I am MCC.”

MCC did not pay his salary, but he deeply understood MCC’s vocation to share God’s love and compassion in the name of Christ.

For communities in many parts of the world, MCC is a visible presence of the body of Christ.

One hundred years ago, MCC’s work began in what is now Ukraine when Mennonites there cried for help from their sisters and brothers in Canada and the U.S. Today, MCC’s ministry of Christian compassion continues with people who are displaced, homeless or infected with HIV or tuberculosis, and with others who are disenfranchised.

New Life Charitable Foundation in Nikopol, a strong, longtime MCC partner in Ukraine, began by helping people addicted to alcohol and other drugs.

Director Natalia Mezentseva said that she and others at New Life realized they couldn’t just tell people about God without addressing the challenges they faced in their daily lives. They needed to share God’s love with their actions as well as their words to help people on a new path to a new life.

MCC’s Christian calling increases when we work alongside others who share our convictions.

In June 2018, the MCC U.S. Board of Directors met at Shalom Mennonite Fellowship in Tucson, Ariz. There we learned that the congregation had the privilege of welcoming several Congolese refugee families who joined in 2016.

The first family who made contact had been baptized into the Mennonite church within the Nyarugusu Refugee Camp in Tanzania. When this family was resettled in Tucson by the International Rescue Committee, it was very important to them to find a Mennonite church. They left a message on Shalom Mennonite’s voice mail, and Shalom co-pastor Tina Schlabach responded, visited in their home and invited them to worship.

That family invited other newly arrived Congolese families to Shalom Mennonite. Now Shalom’s worship includes not only Spanish and English, but also Swahili.

The Congolese brothers and sisters led the MCC U.S. board in a devotional time one morning. Then they offered to pray for the board. They surrounded the board table, stretched out their hands and prayed fervently. Though we could not understand the words, we felt the power of the Spirit of God in that place and over our work.

Through the faith of these brothers and sisters who had experienced so many difficulties in life, our vision for connecting with God’s family near and far was sharpened.

For Anabaptist Christians, MCC is a way to join in God’s work and follow Jesus into the world.

In the middle of war in Vietnam in the late 1960s, a U.S. ambassador to Vietnam told MCC worker Paul Leatherman that he could be charged with treason for feeding hungry children of Viet Cong soldiers or providing medical care to the Viet Cong.

Leatherman says the Spirit inspired him to say, “We follow a book that . . . commands us to feed the hungry, heal the sick and clothe the naked. I know what the penalty is if we do not do that.”

Following Jesus by caring for others has motivated MCC workers for generations. We believe it is as if we are caring for Jesus himself.

In a recent orientation for MCC workers, we shared about MCC core values and said they are summed up in our tagline: Relief, development and peace in the name of Christ. One participant responded, “That’s not just a tagline for MCC. That’s who we are.”