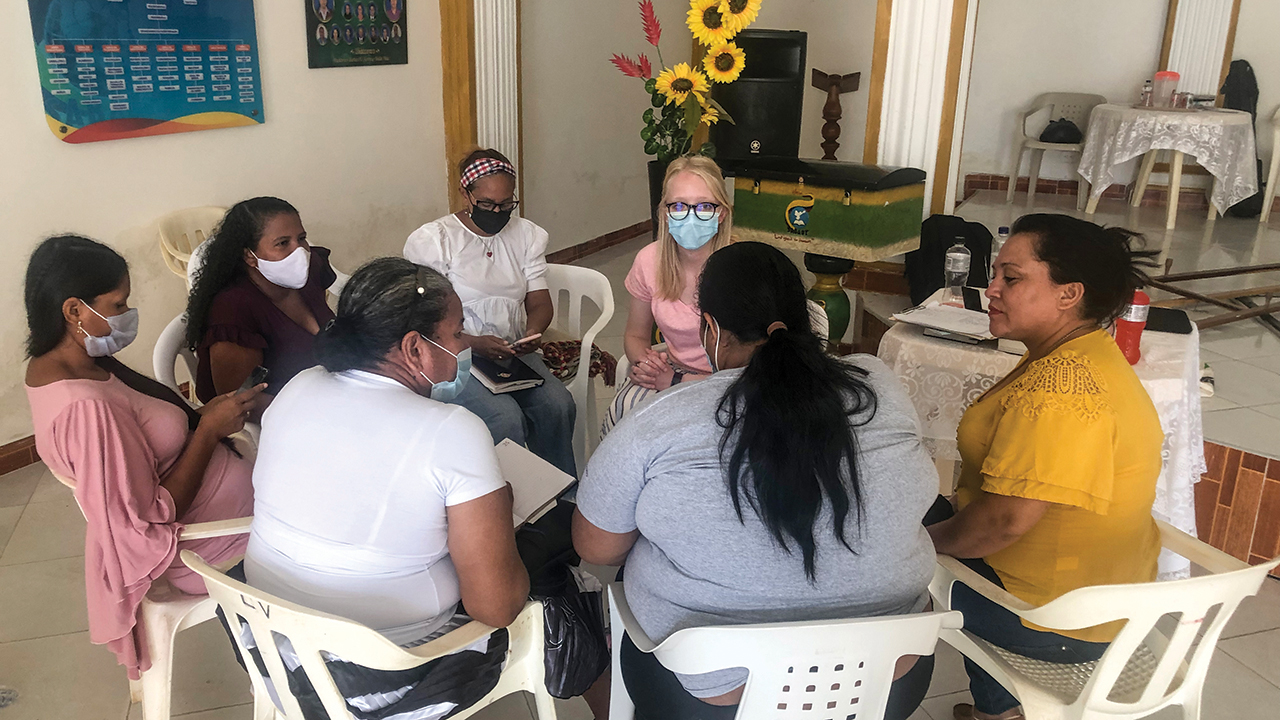 Mennonite Mission Network worker Bekah York, right, meets with women in Colombia to hear about the work in their churches. — MMN

In her new memoir, The White Mosque, Sofia Samatar describes Mennonites as “something that seems very odd, at least at first: an evangelizing tribe.”

This tribe, she says, “travels the world to spread the universal love of God, and at the same time maintains the occult power of its family names, its language, its traditions, its alphabet of bone.”

As a Mennonite without one of the powerful names, Samatar observes that Mennonites implicitly make a contradictory invitation: Join us, even though you can never fully be one of us.

Not that anyone would come right out and say this.

How does the tension inherent in being an evangelizing tribe play out in Mennonite mission work?

Clearly, the worst-case scenario — that the tension dooms the mission — has not happened. There are many success stories.

In the 19th and 20th centuries, mis­sionaries from Europe and North Amer­ica planted the seeds of Anabaptist churches that thrive today: the 370,000-member Meserete ­Kristos Church in Ethiopia, the world’s largest Anabaptist conference; the 52,000-member Brethren in Christ Church of Zimbabwe; multiple groups in India (254,000), the Democratic Republic of Congo (200,000) and Indonesia (107,000); and many more Global South countries with smaller numbers.

As Samatar observes, quoting the poet Julia Kasdorf: “The most representative Mennonite is an African woman.”

For that woman, a Mennonite is simply a member of a certain kind of church. She doesn’t need to solve the North American problem of “Mennonite” being defined as both a church and an ethnic group (as evidenced by people who identify as Mennonite but belong to other churches or no church).

North American Mennonites are trying to be less tribal. Antiracism has become a key part of this effort. Our inclusive goal has expanded beyond eliminating ethnic privilege (being considered “more Mennonite” if your ancestors were Mennonite) to becoming a church where people of color feel just as much at home as white people do. Much work remains.

What about evangelizing, the ­other part of Samatar’s duality? As writers from Mennonite Mission Network make clear, the gospel mission encompasses broad purposes.

It has always seemed odd that in churchspeak the word “mission” traditionally meant trying to win souls or gain converts. Any journey or effort with a goal is a mission. So too with mission motivated by religious faith. Christian service that promotes human well-being — making life more abundant, as Jesus said in John 10:10 — is no less a mission than planting a church.

In every form of sharing, the relationship must be one of equality — walking alongside, or “witness as with-ness,” as MMN executive director Mike Sherrill says.

In 21st-century postcolonial mission, there’s no place for the “white savior” mentality: the rich Westerner who knows all the answers.

Today, few North Americans want to be that kind of missionary — or, for the most part, to evangelize at all. The very idea seems an imposition. Who am I to suggest someone adopt my beliefs?

It’s been said (by André Gingerich Stoner, a staff member of Mennonite Church USA about a decade ago) that Mennonites love service, flirt with peace and are allergic to evangelism.

Is there still a place for evangelism in the traditional sense?

If Westerners don’t want to proselytize anymore, others will.

In a 2018 article in The Atlantic, Yale Divinity School professor Lamin Sanneh said Christians in the Global South “are not burdened by a Western guilt complex, and so they have embraced the vocation of mission as a concomitant of the gospel they have embraced: The faith they received they must share.”

As Christianity shrinks in North America, the descendants of converts may need to turn around and evangelize us.