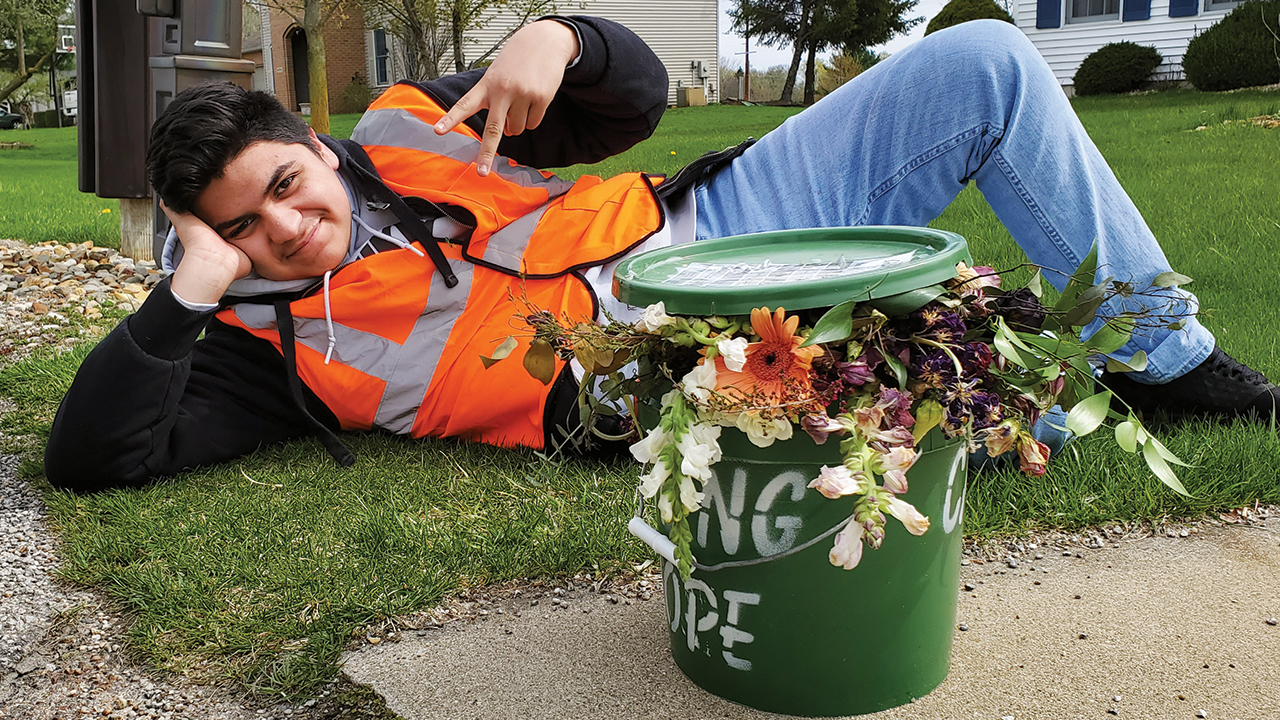 Jovan (identified only by his first name at his family’s request) enjoys his work of weekly curbside food scrap pickup with a particularly attractive bucket. — Daniel Yoder

Since November 2018, members of College Mennonite Church in Goshen, Ind., have diverted 16 tons of food scraps from the landfill.

The scraps are collected each Saturday from 30 households and a restaurant. Then they’re fed to the worms at the farm of a church member.

Yoder began the project in 2018 for several reasons. He wanted a project that would help with faith formation, provide earnings for youth and be entrepreneurial.

“Jesus said, ‘Whatever you do for the least of these, you do it unto me,’ ” Yoder said. “People who are ‘the least of these’ may have handled the food [in production, shipping and sales]. To keep it in the food cycle honors their work.”

Yoder and youth group members charge $15 a month for weekly curbside pickups and sell the castings for $2 a pound. The funds cover the cost of pickup, labor and supplies. A grant from the Schowalter Foundation in North Newton, Kan., provided start-up funding for three years.

“Even with the COVID crisis, we’re nearly self-sustaining, and some grant funds are still available,” Yoder said.

Yoder, who grew up on a dairy farm near Garden City, Mo., preached a sermon at College Mennonite in October 2017 titled “Reconsoil.” The sermon apparently resonated with his own heritage. In February 2018 he began researching projects that other youth ministers were doing.

The idea for the worms came from the church’s food services coordinator, Jessica Whicker, after they attended a Methodist youth ministers conference in North Carolina with training on how to start a social enterprise.

After researching the varieties of worms available, Yoder settled on red wigglers — eisenia fetida, as they are officially known.

“The worms will eat half their body weight each day if they are happy,” Yoder said. Happiness means the right kinds of food and a warm and moist environment.

But not all food scraps keep the worms happy and productive. According to the lids on the green buckets all households receive, the right food scraps come from anything green that grows, fruits and vegetables, coffee grounds, filters and tea bags, newspapers, banana peels and egg shells. Food scraps that do not make the worms happy are citrus and acidic items, fats, oils and salad dressings, salt, meat, sugar and processed food.

Yoder and several youth collect 350 to 450 pounds of food scraps each week. The castings end up being about half of the original weight, because of the water that drains away or evaporates during composting. Each week new scraps are placed on top of previous and partially composted scraps in “continuous-flow worm boxes” with a grate in the bottom that leaves space for the worms to repopulate.

At the North Carolina conference, Yoder met Kenda Creasy Dean, a professor at Princeton Theological Seminary who specializes in practical theology, youth ministry and social innovation. After learning of the project, Creasy Dean was encouraging and will highlight “Casting Hope” in a chapter she wrote for a book, Five Views on the Future of Youth Ministry, to be released this fall.

“If we pay attention to the food we don’t eat,” Yoder said, “it will have an impact on what we do eat.”