At the Mennonite Church USA Convention 2009 this year I was hired by Mennonite Weekly Review to do freelance photography. I had a great time running around under the stage at the youth worship, sitting in on children’s activities and following junior youth on a scavengar hunt around downtown Colombus. I took about a 1000 photos all told.

Of course, MWR could only use about six of them, so here are my top ten favorite photos they didn’t publish: 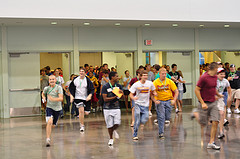 This is the very first event I photographed: the youth charging into the exhibit hall the minute it opened on Tuesday evening. I’m still not exactly sure what they were running towards. Free stuff, most likely. 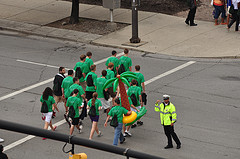 Just before one of the youth worships left out, I went up in the parking garage to get a shot of them leaving. My favorite was this one. Anyone want to suggest a caption? 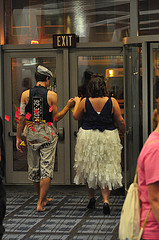 On one of the last nights of the convention, Eastern Mennonite University sponsored a trash fashion show. As the title suggests it featured outfits constructed from trash. The creativity was amazing. This distinguished looking couple made their outfits from surgical gloves, license plates and utitly line flags. 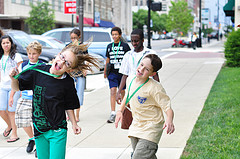 One of my assignments was to get photos from the junior youth convention, so I followed one group around Colombus on their scavengar hunt. This item involved galloping down the street. The young woman’s hair in this photo really reminds me of the enthusiasm and boundless energy of the 10 kids I spent an hour with. 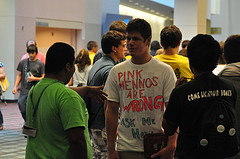 Although the Pink Menno campaign at the convention has received quite a lot of coverage within the Mennonite church and outside, the counter campaign that appeared on Saturday has not received much coverage. The young men wearing these t-shirts were quite verbally agressive when confronting those wearing pink. At one point where one of my Christian Peacemaker Teams colleages felt it was necessary to intervene in an altercation they initated  at a nearby booth in the exhibit hall. 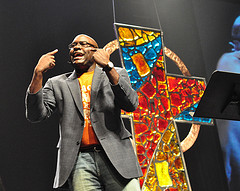 My favorite part of taking photos for MWR was sitting at the foot of the stage at the youth convention snapping portraits of the speakers. I got a better then front row seat for some of the most vibrant and energy filled speakers inside and outside the Mennonite church today. Leonard Dow is one of those rising voices. He strode back and forth across the stage with an authority, conviction and passion that I don’t remember ever seeing in the youth conventions of my high school years. Plus he wore a Peace Takes Guts shirt. 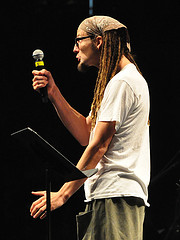 Shane Claiborne loves making goofy faces. This was his impression of a young friend of his eating an ice cream cone. 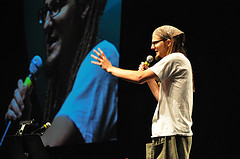 Shane Claiborne pats himself on the shoulder. The big screens offered the speakers all sorts of opportunities to interact with themselves. Shane was the only one who I caught fully taking advantage of the possibilities. 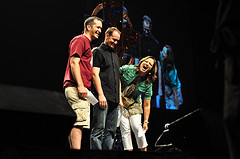 I was really impressed with the job that Anna Hinojosa Gomez (right) and Peter Eberly (left) did leading the youth worhsip. They seemed really relaxed and comfortable with themselves on stage. They shared openly and authentically from their own lives as they talked about issues as tough as self-harm and self image. They didn’t come across as cheesy or contrived. Again, I don’t remember anything nearly this substantial from my own experience at conventions as a youth. Here they share a laugh with speaker Shane Hipps (center). 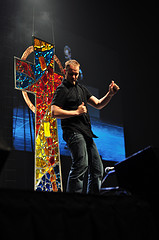 And my number one photo that didnt’ make it into MWR is… Shane Hipps teaching the Booty-X dance to 6,000 Mennonite youth at the foot of the cross. An even that would have been beyond the pale in my parent’s youth wins laughs and adoration from the masses in mine. May they be more coordinated and graceful then I.