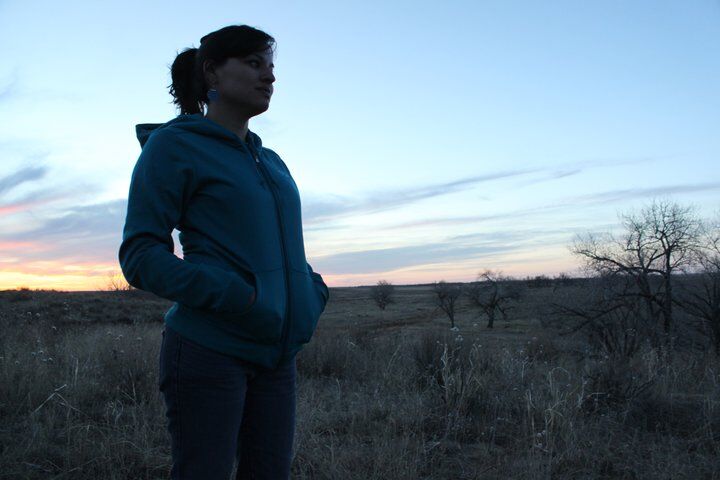 In the same way, when I ask her about her passion and why she does what she does, Littlewolf says her work involves “continuing a tradition of resistance.”

Her tribe, Northern Cheyenne, was held captive in Oklahoma over a century ago. “They knew they would be hunted by the U.S. government if they went to Montana,” she says, “but they did it anyway.”

Littlewolf, 35, who works with Mennonite Central Committee (MCC) Central States and the Indigenous Visioning Circle, also does her work for the many young people who have died from suicide, she says.

And she does it for her four nieces. “It’s in my DNA,” she says.

Littlewolf rents a house in rural Newton, Kan., but she travels extensively. When I first interviewed her on May 31, she was getting ready to travel to Toronto for a conference. The following week, she was to return to Toronto to give a presentation on the Doctrine of Discovery. The week after that, she was scheduled to fly to Norway for a meeting of the World Council of Churches. She keeps her passport in the same spot at home so she doesn’t lose it, she says.

Littlewolf grew up on the Northern Cheyenne reservation in Busby, Mont., and was part of White River Cheyenne Mennonite Church. Her father worked for Head Start, and her mother was a special education teacher. Erica went to Head Start, then to Colstrip School, located off the reservation. She says she got on the bus at 6 a.m. each day, and when she was involved in sports, she didn’t get home until 9 p.m. Later she attended Black Hills State University in Spearfish, S.D., graduating in 2004 with a degree in psychology and American Indian studies.

After college, she volunteered in Phoenix, Ariz., for Habitat for Humanity through AmeriCorps, then later as an academic counselor at the University of Phoenix. While in Phoenix, she enrolled at Arizona State University in the graduate program in social work. Then Hurricane Katrina hit New Orleans, and she realized the social work program did not address the systemic racism she saw operating in the aftermath of that storm.

During her college years, Littlewolf had worked for MCC as a summer service worker in her home community in Montana. She helped with vacation Bible school, took youth on backpacking trips, and in 2003 traveled with a group to the Mennonite World Conference assembly in Zimbabwe. In 2004, she was asked to serve on the MCC Central States board. After Katrina, she did contract work for MCC. She worked with the MCC Oglala Lakota Nation unit located in Porcupine, S.D., on the Pine Ridge Reservation. She then became a service worker and served from 2007 to 2009.

That work became the Indigenous Visioning Circle, which is under MCC. In her work, she focuses on big issues (macro rather than micro)—the “big picture,” she says. She connects with the MCC United Nations desk and the MCC Washington desk. Her job is to help educate the constituency about issues faced by Native Americans.

As part of that work, she teaches people about the Doctrine of Discovery, which was the theological justification settlers used to take land from indigenous people.

In May 2012, at the United Nations Permanent Forum on Indigenous Issues, the World Council of Churches called for the Doctrine of Discovery to be repudiated. That has become a growing movement, Littlewolf says. And she is working with people to see what steps churches can take in repudiating it.

Does she identify as a Mennonite? “Some days,” she says, “but not if it’s an ethnicity.”

She says she relates to Mennonites she knows and to pacifism, but not to an exclusive ethnic sense of Mennonite as a person with Germanic ancestors.

She points to a sad, ironic aspect to Mennonites’ history in North America: “Mennonites came to [North] America for refuge from persecution, but they often displaced Native peoples.”

Part of her job and her calling is to help people understand this dynamic. “I understand when people don’t want to hear [this],” she says. “And people need to hear it in order to not repeat it.”

What gives Littlewolf hope? She says she sees both individual and systemic hope. While others decried the election campaign this past spring, Littlewolf found it helpful that people were displaying their racism openly. “It makes things clearer when people who hold racist views don’t try to hide them,” she says.

She also sees hope in the many Indigenous people who have joined forces to protect the water and stop the Dakota Access Pipeline on the Standing Rock reservation.

This energy helps build connections. “It’s hopeful when people who are oppressed see themselves more connected than isolated,” she adds. She has never before seen a coming together of Indigenous Nations and non-Indigenous people to stand for something they believe in.

She also finds hope in the youth at White River Cheyenne Mennonite Church. They come together each New Year’s Eve at the church to play games and build their relationships. It also keeps them away from the drinking that often happens at that time on the reservation. Last New Year’s Eve, she spoke to the group and spent time with them. Their lives and commitment give her hope, she says.

Read the rest of our original features and Bible studies on “Fidelity of Place” in the November issue of The Mennonite.

You can also listen to a Peace Lab podcast interview with Erica.