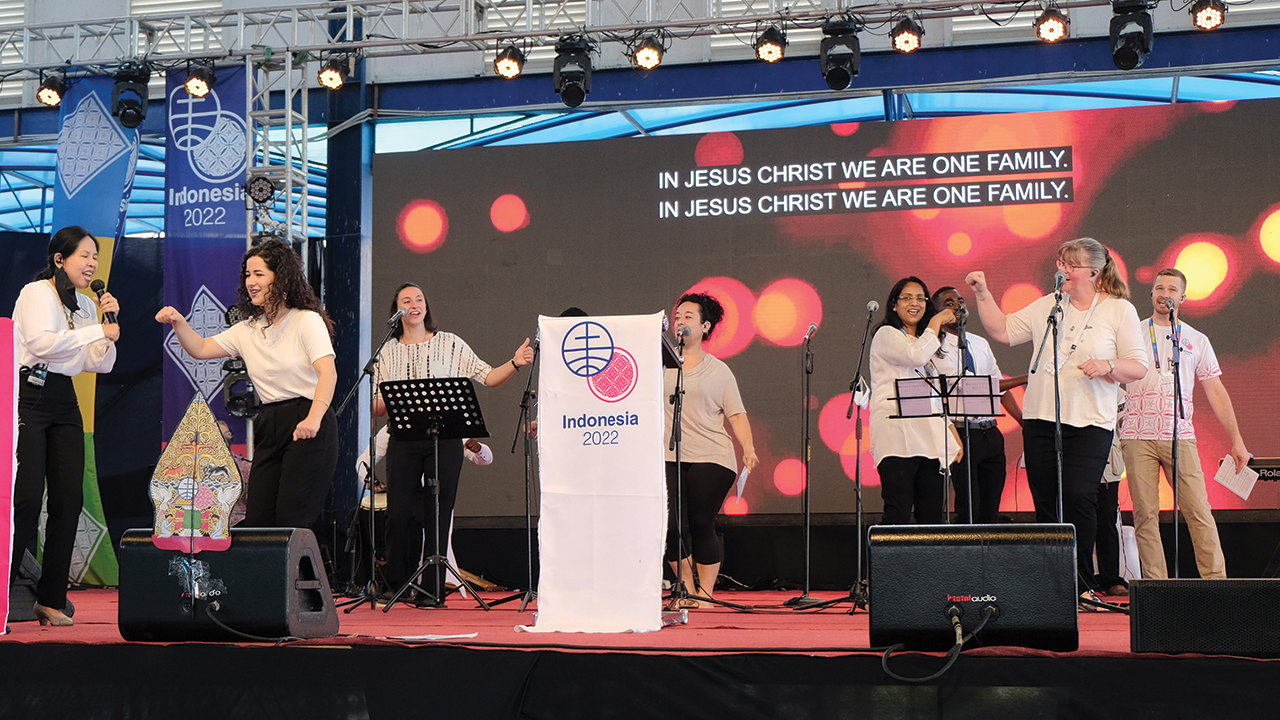 International Ensemble singers greet one another with fist bumps during the morning worship service on July 6 at the Mennonite World Conference assembly in Salatiga, Indonesia. — Kresna Kurniawan

Saying the war in Ukraine has shaken Western European Mennonites’ commitment to nonviolence, a French pastor urged Mennonites from around the world to get off the sidelines and work for peace.

Hundreds of worshipers heard her message on July 6, the second day of the Mennonite World Conference assembly in Salatiga, Indonesia.

“We affirmed nonviolence when our context was peaceful, but in the face of war we see nonviolent resistance as naive and unrealistic,” said Salome Haldemann of France, a graduate of Anabaptist Mennonite Biblical Seminary.

Haldemann’s address was read by Anne Hansen of Germany, because Haldemann was not able to attend.

After Russia invaded Ukraine in February, she said, the nearness and reality of war shocked Mennonites in Western Europe.

“Today we are afraid that war may overtake Europe,” she said. “Suddenly our theology and beliefs feel obsolete. A storm took over Europe, and our convictions collapsed.”

The way to survive the storm, she said, is to build our convictions on the solid rock of Jesus and act on them.

Citing the tradition of calls to action at MWC assemblies, she urged the church to get off the sidelines and work for peace.

She noted that at the 1967 assembly in Amsterdam, U.S. civil rights leader Vincent Harding called on Mennonites to “come alongside Black sisters and brothers in the freedom struggle.”

“But most of us have stayed on the sidelines where things are comfortable,” Haldemann said. “What does it look like to practice love of the enemy on a collective level in our time and place? It may very well look like nonviolent resistance.

“Maybe Mennonites could prepare for war resistance with an anti-military service, like a nonviolent resistance boot camp. . . . Nations prepare for war with military training. It might be time for us to create a widespread training for church people to learn and practice the basics of civil resistance.”

Europeans, who have more experience with discussion and debate than with activism, “need the help of the global church if we want to find our footing in the field of practice,” she said. “We have brothers and sisters who have experience in nonviolent resistance. Please train us. Practice with us, so we can learn together.”

Reflecting the culture of a majority Muslim country, Sufi Islamic dancers participated in the service. Worshipers at the main meeting site at STT Seminary viewed their presentation by livestream from a Mennonite church, Congdut GITJ Jepara, in the region of Central Java.