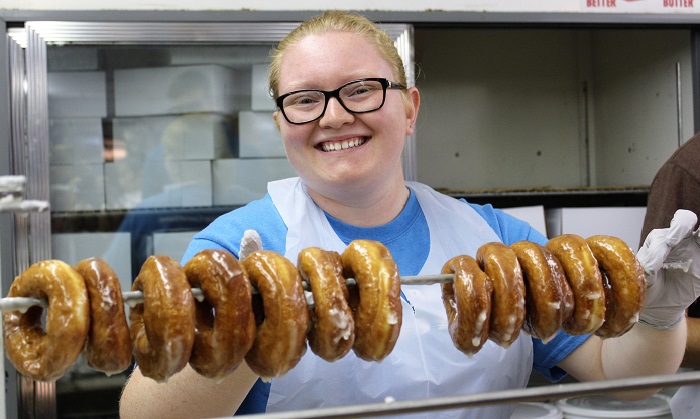 Photo: Bekah Mongold, an Eastern Mennonite University sophomore from Mathias, W.Va., transports donuts from the glaze to waiting customers. About 12,000 of the confectionary delights were sold. Photo by Jim Bishop.

The Virginia Mennonite Relief Sale celebrated its 50th birthday in style Sept. 30-Oct. 1 at the Rockingham County Fairgrounds with near record-setting fund raising.

Preliminary figures indicate this year’s sale raised about $338,300 for the worldwide relief, service and peacebuilding programs of the Mennonite Central Committee (MCC). Last year’s effort raised $264,021; the highest amount ever raised was $ 372,901 in 2014.

“Once all expenses reports are finalized, we expect to come close to breaking the record sales total,” said Dave Rush of Harrisonburg, relief sale chair.

Activities began Friday evening with a barbecued beef dinner, music by local groups and the start of the live and silent auction and ran through Saturday afternoon. Nearly 1,000 volunteers again

offered their time and talents.

The annual auction of handmade quilts, wall hangings, knotted comforters and afghans, artwork and wooden handcrafted items accounted for $141,124 of the total funds raised. Nineteen quilts went for $1,000 or more.

A handcrafted wall hanging to commemorate the 50th anniversary of the sale was auctioned Saturday for $5,100. Carolyn S. Bontrager of Harrisonburg pieced the 65”x65” Round Robin wall hanging and Charlotte Swope of Linville did all the quilting.

Bontrager and Swope collaborated nearly two years on the project, which utilized 50 different fabrics reminiscent of the Civil War period and 325 yards of thread in constructing the 40 six-inch blocks that comprise the piece.

A 92”-diameter braided wool rug crafted by the late Stella Brunk Shank of Broadway took the top auction bid of $6,000. An eight-star baby quilt made from feed sacks from the 1930s and 1940s by Carmen Wyse of Harrisonburg and Mac MacArthur-Fox of Blacksburg, Va., and a 102”x110” white-on-white quilt made by Anna Mary Burkholder of Augusta County each went for $5,000.

Total funds raised included $22,185 from the annual “My Coins Count” (formerly “Penny Power”) project. Each year, area congregations, schools, homes and businesses collect coins and currency in large water jugs for weeks, and then bring their containers to the sale for sorting and tabulating done by employees of Park View Federal Credit Union.

The funds will go toward support for Rafael and Solange Tartari, Virginia Mennonite Missions workers in Lezhe, Albania, and helping uprooted people in Ethiopia, Honduras and other places.

The final coin-collection total is likely to be higher with some matching funds and other gifts yet to come in, according to Rush.

The homemade glazed donut operation got under way at 1 a.m. Saturday, with 12,000 of the confectionary delights sold. John and Jennifer Kurtz Murch of Linville headed up the donut-making

for the first time, taking over for Lois B. Wenger, who had commandeered operations for 14 years.

The celebration also saw the release of “For the Least of These: 50 Years of the Virginia Mennonite Relief Sale: A Photographic History, 1967-2016.” The 81-page softcover book features some 350 pictures detailing the sale’s beginnings and rapid growth, along with stories, sale milestones, major volunteers, statistics and other historical data.

Karen Gonzol of Martinsburg, W.Va., relief sale representative from Stephens City Mennonite Church, volunteered to compile the book. She started by combing the archives at Eastern Mennonite University and connecting with people who knew others with information, stories and photos. “Soon I became intrigued with what I was finding,” Gonzol said. “I wanted to get as much of the story of the sale as I could find!”

The relief sale was held for the first time on Sept. 30, 1967 on the Paul Wenger farm south of Waynesboro. Attendance was estimated between 3,000 and 4,000 people with net proceeds of $6,393 sent to Mennonite Central Committee.

The sale moved to Augusta Expoland in 1974 and, with the need for larger facilities, to the Rockingham County Fairgrounds in 1999.  The Virginia sale has raised a total of more than $6.5 million over the past 49 years, not counting many special projects such as school kits, food bags and relief kits supported by in-kind donations.

“An especially big ‘thank you’ goes to all the many volunteers who gave of their time and energy to make this event possible,” Rush said. “Also, many thanks to the donors and buyers.

“It brings much joy to me to see us all work together to raise money to help others around the world and to reach those Jesus calls us to serve,” Rush added. “May we continue to do this each and every day.”