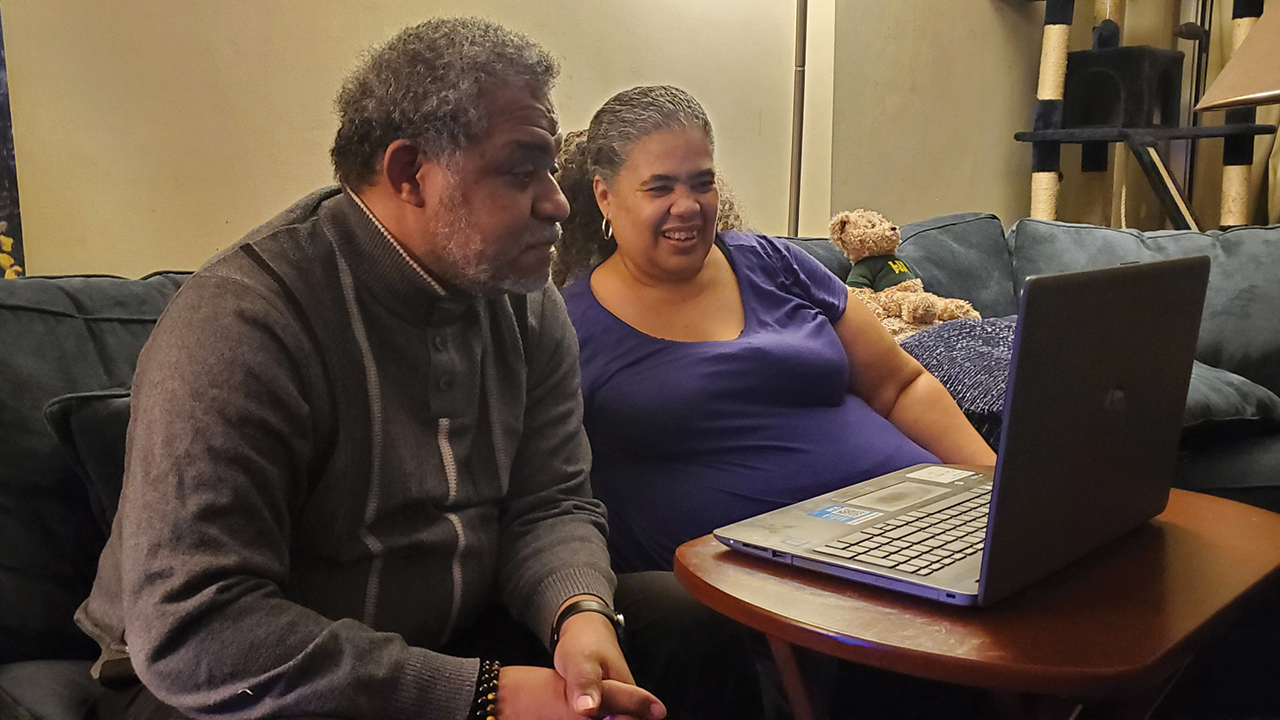 Don’t try to find one of New York City’s newest Mennonite congregations on a map. Grace and Peace Mennonite Church is a primarily virtual congregation, forgoing a physical location in favor of gatherings that take place almost exclusively online or by phone.

It is believed to be the first congregation in Mennonite Church USA with such an emphasis.

Grace and Peace got its start in early 2019, when a group of people from a handful of churches began discussing a shared desire for a worshiping community that would be intentional about community — especially for people who might not be able to gather in large groups for a variety of reasons.

Some people have mobility issues that make leaving the house difficult. Sensitivities to loud noises or large groups can make traditional worship services uncomfortable for others.

The group began meeting in the apartment of Rhonda Mitchell, a member of Grace and Peace’s leadership team.

“We had at that point five or six households represented,” said Naomi Yoder, also part of the leadership team. “Then we decided we’d meet every other week at Rhonda’s house, about September 2019. We went into 2020 doing a study of Palmer Becker’s Begin Anew: Christian Discipleship Seminars.”

Sunday worship at one residence and Bible study at another were joined by monthly in-person fun nights. With the help of Ruth Yoder Wenger, New York City conference minister for Atlantic Coast Conference of MC USA, participants took a survey, answering questions on “What would be the perfect church for you?”

A shared vision was evident.

“We know there’s no such thing as a perfect church,” said Naomi Yoder. “We were all struggling with different life situations and also feeling displaced in terms of not having the kind of church family connection we had growing up.”

Wenger noted that the focus on community centers on people who can wind up marginalized in other congregations.

“People in big congregations can get lost because they are not at the center of the church’s focus,” she said. “Their focus often tends to be on what works for most of the people most of the time, and other people can get passed over.”

Grace and Peace was rolling. Then along came COVID-19. The nation’s first pandemic hot spot responded with lockdown precautions. Guests haven’t returned to Mitchell’s apartment since she hosted a meeting there March 8, 2020.

But gatherings and activities increased.

“It started out trying to accommodate everybody’s needs, whether that was spiritual or emotional,” said Anita Castle of the leadership team, who plans to be credentialed for ministry by Atlantic Coast Conference. “Once COVID hit . . . we realized we could be virtual and not worry about travel, weather or mobility issues. We realized we could have even more freedom to share about what’s happening with us.”

Mitchell added the church would have likely developed without the pandemic, but probably meeting only every other week in her apartment instead of multiple times during the week. The online emphasis also allows Naomi Yoder to remain closely engaged even after moving with her father to a retirement community in Maryland.

“There’s no rent for a building,” Castle said. “There’s no electricity bills or heat bills or water bills. Everyone’s in their own home. . . .

Mitchell said that even when pandemic precautions ease to allow some small groups to meet in person, the only running cost will be a minimal Zoom online conference subscription.

“The good thing is it allows our funds to be used more by the people in the congregation who have needs,” she said. “And that has been very helpful.”

The primarily virtual approach is not without challenges. Some participants lack internet access or don’t know how to use online platforms like Zoom on computers or smartphones. Social distancing has kept in-person tutorial sessions from bringing them up to speed.

There is also a longing for occasional physical gatherings.

“We used to have great meals,” Castle said. “When we had fun nights, we had great meals and snacks. We definitely miss eating and fellowshiping in that way.”

Those events will return, in time.

As an emerging congregation in Atlantic Coast Conference, the group was introduced to delegates last year in a video during the online fall assembly. Grace and Peace anticipates applying for membership for delegate voting at the spring assembly, scheduled for April 17.

“It’s an example of how church can be re-visioned, especially in response to a crisis like COVID that seems like such a harmful event,” Wenger said. “It is in many ways, and yet out of that harm really new good things can be generated.”

Wayward son makes peace with past