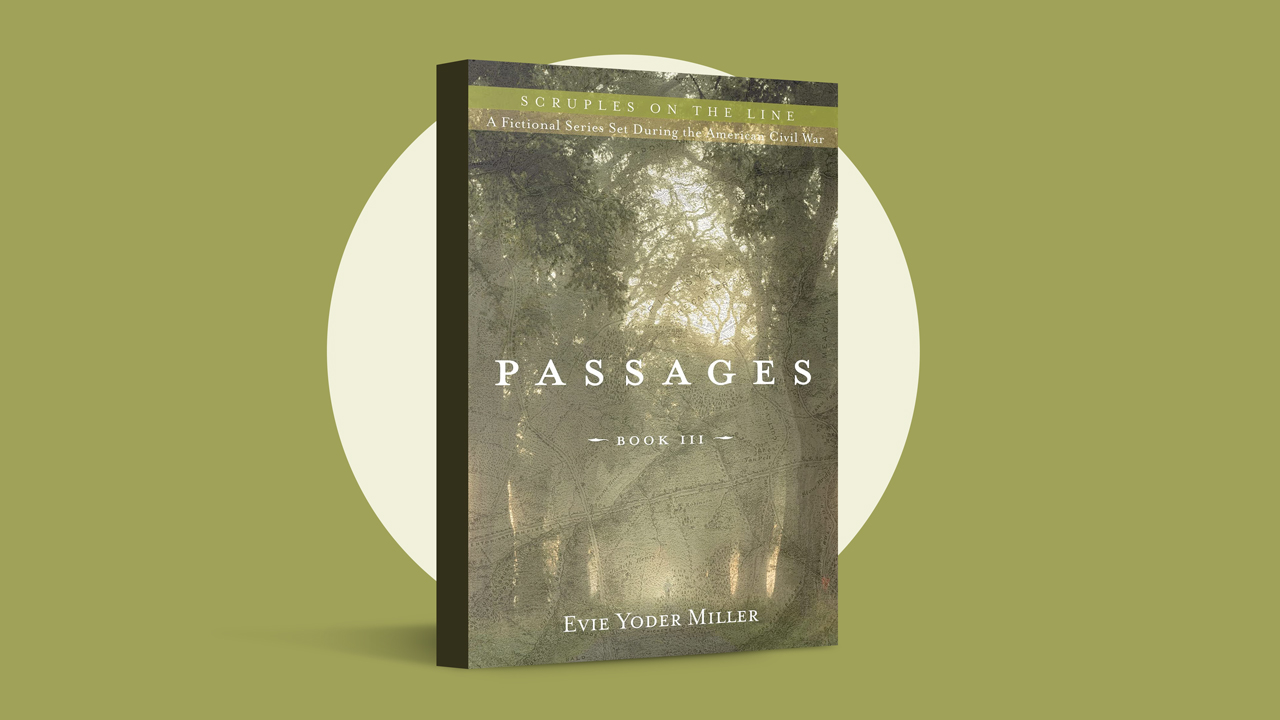 Passages, Book III of “Scruples on the Line,” by Evie Yoder Miller (Resource Publications, an imprint of Wipf and Stock Publishers, 2021)

When a historian compares ­today’s political divisions in the United States to conditions during the Civil War, do you imagine what it would be like to be nonresistant amid violent civil unrest?

Between 1861 and 1865, Ana­baptists faced that reality. Brother against brother. Home invasions. Barns and houses burned to the ground.

How Mennonites, Brethren and Amish lived out their convictions (or did not) is told in a trilogy of historical fiction, “Scruples on the Line,” by novelist Evie Yoder Miller.

The trilogy is now complete with the publication of Passages. Describing the last 14 months of the war, this final volume is the most suspenseful. As in the previous volumes, Shadows and Loyalties, five narrators tell the story. Two are Virginians: Esther Shank, a Mennonite; and David Bowman, a German Baptist (today’s Church of the Brethren). Three are based on actual people: Betsey Petersheim, an Amish girl of West Virginia; Fretz Funk, a Mennonite of Chicago; and Jacob Schwartzendruber, an Amish bishop of Iowa.

Most of the action takes place in Virginia’s Shenandoah Valley, site of some of the war’s final battles. Shank, whose husband and oldest son have left to avoid the draft, is worried for them and her second son, who joined the Confederate army. Pregnant and uncertain how they will plant enough to feed the family, she is concerned that her third son must also now flee the draft. Her impulse to grab a knife to protect their food from roving soldiers troubles her. Anxiety and devastating loss push her to the breaking point.

Bowman is exhausted with worry for his beloved elder John Kline (an actual person), falsely rumored to be a Union spy, who insists on traveling into Union territory to attend church conferences. Why won’t Kline take the threats against his life seriously? Despite his family’s shortage of food, Bowman insists they take a barrel of flour to church for those who have even less. Chosen by lot, he feels inadequate as a minister. Finally, he is able to feed his flock and accepts others’ generosity.

The other three narrators face less dramatic but still intense challenges. Fretz — whose character is based on the influential Mennonite publisher John F. Funk — enjoys newly married life, works full time and spends long hours publishing Herald of Truth (which in 1908 merged with Gospel Witness to form Gospel Herald and thus was an ancestor of Anabaptist World). In it, he addresses the issues facing the church — including the rightful relationship of Anabaptists to the government — and informs Mennonites at large of the plight of those in the Shenandoah Valley.
Schwartzendruber — whose character, like Fretz’s, is based on actual diaries — feels his harsh preaching about separation from the world is misunderstood. He is heartbroken when one of the Amish families under his leadership does not welcome his condolences when the body of their son, a Union soldier, comes home.

Petersheim, 12 years old, develops a crush on a young man who interrupts his flight north to help with the crops when her father is in poor health. This young man is Shank’s son Joseph — just one pleasing example of a narrator’s life intersecting with another.

Miller’s characters face questions of conscience: Will they fight, and on which side? Will they pay an exemption tax or hire a substitute? Will they go into hiding or flee north? Will farmers consent to the use of their horses and wagons to haul supplies for the troops? How will they respond to soldiers and civilians in flight, including a man who was enslaved, who arrives on their doorstep needing food and shelter?

Books about the past, it has been noted, are also about the present. In an author’s note, Miller describes a process of research and writing that spanned 12 years, producing a work of the imagination that is also “true.” Blending historical facts, interesting details of everyday life and the truths of characters struggling with the conflicts of their time, Miller’s narrative and characters will live on in readers’ imaginations. She accurately describes war’s trauma, the impact of which is still evident today. She acknowledges that Anabaptists during the Civil War “were on both sides of the giving and receiving of mocking, derogatory depictions and name-calling.” It is her role as a literary novelist to hold a mirror to the “mess and glory” of that time. She leaves it to the reader to imagine beyond the text the possibility of living “more justly and generously.” This trilogy, I believe, takes its place among the best works of Mennonite historical fiction.

Carol Lehman is a clinical psychologist and a member of Cincinnati Mennonite Fellowship.