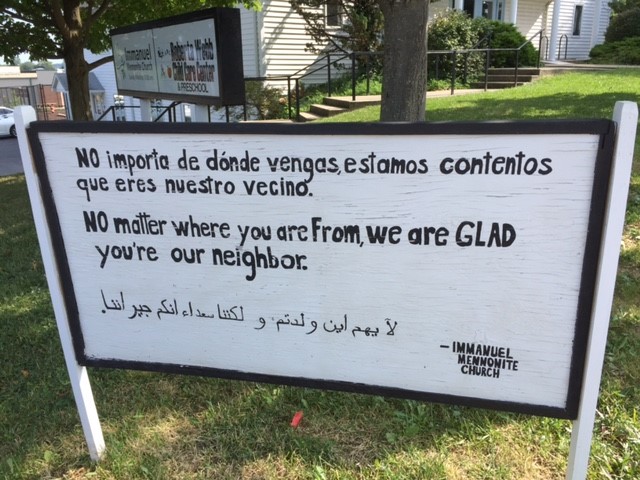 Almost a year ago, Matthew Bucher was watching a presidential primary debate and lamenting the language candidates were using to refer to recent immigrants to the United States. Bucher is pastor at Immanuel Mennonite Fellowship in Harrisonburg, Virginia. The church is located in northeast Harrisonburg, in a neighborhood that is rapidly diversifying and includes people who speak many languages, most prominent among them English, Spanish and Arabic.

As he thought about ways his congregation could counter anti-immigrant rhetoric, Bucher came up with the phrase, “No matter where you’re from, we’re glad you’re our neighbor.” He shared the statement with his church, and a member of the congregation, Melissa Howard, painted the slogan, in all three languages, on a large yard sign that the congregation displayed in its front yard.

“I’m a relatively new pastor, and I’ve tried to encourage the congregation to make the walls of the church pretty permeable for people coming in and for us to go out and be part of the community. The sign is a reminder to us that this is part of our commitment as real people following Jesus’ radical call to love and service and a strong statement to folks in our community that we are glad they are here, whether they’ve lived here for a 100 years or a couple weeks,” said Bucher in a Dec. 5 interview.

Soon after the congregation posted the sign in its yard, the Harrisonburg District of Mennonite Churches

decided to have a new sign design created and to reprint the sign in a smaller size that individuals could display at home.

Immanuel Mennonite printed 300 signs and sold them at the Virginia Mennonite Relief Sale, with all profits going to support Mennonite Central Committee. The signs quickly sold out, and the congregation continued to receive requests for more. So they ordered 1,000 more signs. Currently the congregation has 25 signs remaining.

In September, Immanuel member Steve Carpenter wrote a blog for The Mennonite’s website, detailing the congregation’s journey to creating the sign. Karl Shelly, pastor at Assembly Mennonite Church in Goshen, Indiana, read Carpenter’s blog and contacted Immanuel about where he could find the signs. Immanuel made the sign design, created by Jerry Holsopple, Eastern Mennonite University professor, available online, and Shelly, with help from Assembly member Bethany Swope, had 200 signs printed. They began to share the signs with members of the Goshen community, and on Oct. 22, The Goshen News, a local newspaper, ran a story about the yard signs. After the election, requests for the signs increased.

The congregation sold all 200 signs, ordered 50 more and sold them all in less than a week. They now have a third order pending. All profits from the sales of the signs have gone to three community service organizations: Church Community Services, the National Immigrant Justice Center and La Casa.

Shelly has been encouraged to see interest in the signs coming from people beyond Mennonite congregations.

“The sign’s message is in some ways a central tenet of what Christians are taught in Matthew 25, that in welcoming strangers we’re welcoming Christ. But folks who don’t come from that tradition yet have deep-seeded philosophies of compassion and justice are also asking for the sign. Interest is coming from a nice cross section of the community,” said Shelly in a Dec. 6 interview.

by the signs. On one occasion, a couple driving through Goshen saw the signs and did a Google search to find out where they came from. They stumbled across The Goshen News feature article and called Assembly’s office to express their gratitude to the congregation for spreading this message.

Since Immanuel Mennonite made the sign design available, the signs have spread to locations including Columbus, Ohio, eastern Pennsylvania, Washington D.C., the Triangle metro area in North Carolina, Wisconsin and the Quad Cities area.

In Newton, Kansas, Jason Miller, who attends Shalom Mennonite Church, was feeling discouraged after the anti-immigrant rhetoric used throughout the presidential campaign and saw printing the signs as an opportunity to create a “small concrete symbol of welcome in Newton.” Shalom has also partnered with Episcopal Migration Ministries in Wichita, Kansas, to furnish and stock two homes for refugees who are being resettled in the area.

At first, Miller placed an order for 25 signs, but he sold them all within 15 minutes of bringing them to church at Shalom on a Sunday morning. He distributed 75 signs in total, and all profits went to support the Shalom refugee resettlement fund.

In State College, Pennsylvania, Ben Wideman, pastor for 3rd Way Collective, a student organization on the Penn State University campus, distributed signs to people throughout the community. Community member Jason Crane posted a sign near his home and was surprised when an Arabic-speaking man came to deliver a food order at his house and was moved to tears by the sign. The two men shook hands and hugged. “We’re all in this together,” wrote Crane.

The sign design has also been used to create window decals and T-shirts.

Bucher and members of Immanuel have been surprised and grateful for the overwhelming response to the sign design. Bucher even received an email from a person living in Saudi Arabia who saw the sign design posted on Facebook and wrote to thank the church for painting a welcoming vision on behalf of Jesus followers. The sign has spread to many denominations, to people who don’t consider themselves Christians.In Harrionsburg, a local mosque and synagogue both have posted signs in their yards.