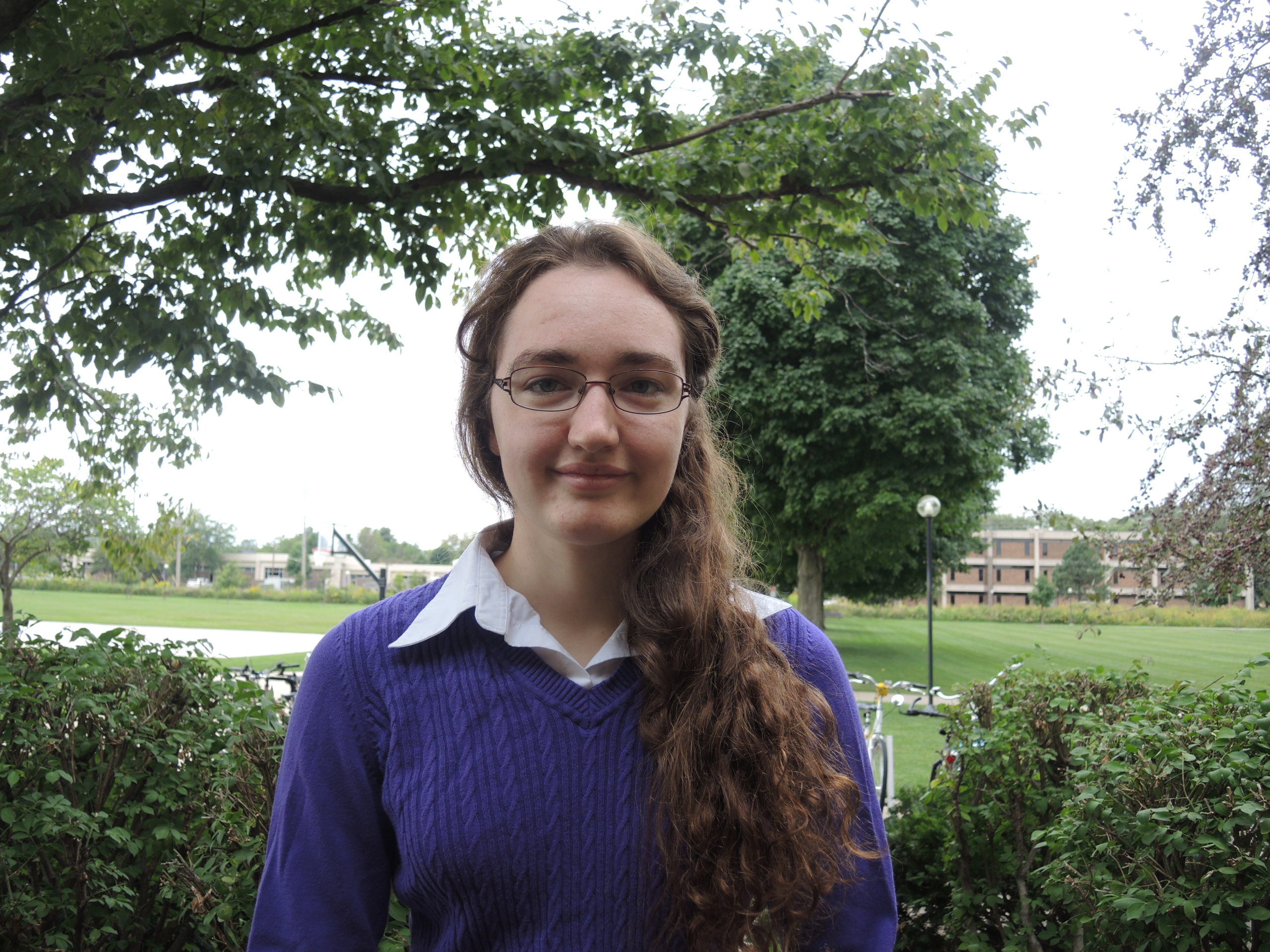 Eliana Neufeld Basinger is a sophomore social work major at Goshen (Ind.) College. While at school, she attends Eighth Street Mennonite Church and Open Table Mennonite Fellowship in Goshen. Eliana has enjoyed getting involved in the wider church by being a delegate at this year’s convention for her home congregation, Lima (Ohio) Mennonite Church and participating in the Ministry Inquiry Program at Lorraine Avenue Mennonite Church, Wichita, Kan.

Mennonite Church USA (MC USA) has been discussing whether our pastors can perform same-sex marriages and whether LGBTQ Mennonites can be members and leaders in our churches. Some on both sides of the issue have called us to put our differences aside and work together on other things rather than arguing. Others have called for their congregations and conferences to leave in order to remain faithful to their view of Scripture. We’ve been so immersed in this conflict that we haven’t realized that we’re having the wrong conversation. Instead of debating separation and unity, we should be asking why we have tolerated the sins of exclusion and discrimination for so long and how we can move forward while reflecting God’s love to all people in our churches.

This exclusion is sin because people God loves are being denied full participation in the church. Churches are leaving MC USA because of the movement toward affirmation of LGBTQ people. For example, Lancaster Conference moderator Keith Weaver cited the credentialing of Theda Good and Eastern Mennonite University’s change of hiring policy to allow faculty and staff in same-sex relationships as contributing factors in their decision to re-evaluate their relationship with the denomination.[1]

We’re talking as if this is an abstract theological issue, but in reality the conflict is over the lives and faith of our siblings in Christ. Having the validity of your relationship with God and your belief in the gospel made a topic of denominational discussion and being the object of debate must be a dehumanizing, painful and alienating experience.

While it is among those calling for separation, the Evana Network has been defending itself from the charge that it is being formed in response to disagreement within MC USA on a single issue, specifically the slowly increasing welcome of people in same-sex relationships. The network downplays this issue, which John Troyer, its transitional administrator, has admitted “was a catalyst for Evana’s formation,”[3] presenting its focus on evangelism and an alternate church structure instead. Evana’s vision statement cites “renewed focus on the centrality of Jesus Christ and the Great Commission”[4] as its primary goal.

But the problem isn’t that Evana wants a new structure or that it has a different understanding of polity. Church structures change over time, and that’s not necessarily a bad thing. While I mourn the loss of connections that will come with conferences and churches leaving MC USA, they are not unjustified in leaving if they feel that they can be more faithful to God’s call in another church structure.

However, this is not only a matter of wanting different church structures or different polities. This is about exclusion, and exclusion of any person is a sin. Jesus tells us to judge whether prophets and their messages are true by their fruits (Matthew 7:16-20), and the fruits of theology that forbids same-sex marriage have been incredibly destructive, resulting in division in churches and families, inner turmoil for LGBTQ people, faithful Christians being pushed away from the church, and even suicide and hate crimes.

Troyer has cited Evana’s “unwilling[ness] to compromise on our vision of God’s shalom”[5] as a reason for leaving. Its actions show that this definition of shalom prohibits full welcome (including pastoral leadership) for people in committed same-sex relationships. This coded language, in which vague comments about upholding the Bible and denominational statements actually refer to a specific, exclusionary view of marriage, is an example of the difference between what Evana says and does. In another blog post, Troyer states that Evana is committed “to avoid[ing] unnecessarily drawing lines,” but how could disfellowshiping from those who are moving toward inclusion be anything else? If we have all truly been made one in Christ Jesus, we can’t draw lines through our communities without cutting off a part of who we are.

From almost the moment I was born, LGBTQ people have been showing me the love of Christ. I am who I am as a result of communities LGBTQ Christians are a part of, and I know I’m not the only one for whom this is true. Whether we’re aware of it or not, there are LGBTQ people in all our churches, from the most conservative to the most liberal. If inclusion even has to be discussed, we are failing. Who are we to say that those who have loved us and taught us and been church with us don’t deserve a place at the table? Doing so is sinful. We’re having the wrong conversation; we need to stop asking if we can tolerate LGBTQ people in membership and leadership and start asking how we can find a true Third Way—not a compromise but a way of radical love that says, Together we are the body of Christ, and if any member is excluded, the rest of us suffer as well.

When Jesus was on earth, the sins he condemned most were those of the religious leaders who excluded people based on religious purity codes—codes that were clearly stated in Scripture. He spoke up for and stood with those who were excluded, and I believe we’re called to do the same. This means more than simply not marginalizing people ourselves; it requires standing up for those who are being marginalized by others. I have also sometimes failed to stand with LGBTQ people and other marginalized groups, so I, too, am guilty of the sin of exclusion. In light of the pain I saw and felt at the convention in Kansas City this summer, I’m trying to do a better job of not using my privilege of being welcomed myself as a reason not to speak up. I pray that we can join each other on a journey of repentance and reconciliation.

The Membership Guidelines Resolution that passed at MC USA’s biennial convention reaffirms the Executive Board’s refusal to credential people in same-sex relationships and includes a moratorium on the delegate assembly discussing change to the Membership Guidelines. By calling for the moratorium, “in order to exercise forbearance on matters that divide us and to focus attention on the missional vision that unites us,”[6] the writers of the resolution attempt to present maintaining order as peace. But the true peace of Christ breaks down the dividing wall (Ephesians 2:14). How can we bring the message of reconciliation to the world when we can’t even reconcile within our own churches? While not changing the guidelines may prevent some churches from leaving, it is anything but forbearance for those who will be denied positions in church leadership, and the “us” it speaks of uniting isn’t really all of us—only straight, cisgender people who are allowed the privilege of escaping public scrutiny of their families. Ervin Stutzman, MC USA’s executive director, also calls for this kind of maintenance of order, naming it “a united effort to address broadly shared concerns in a spirit of communal discernment.”[7] When we try to debate the worthiness of LGBTQ people to participate in church, no matter how outwardly nice our discernment is, we commit spiritual violence against them and add to the wounds in the body of Christ.

Watching LGBTQ people who have been hurt by the church’s sins still affirm their love for and commitment to the church in hymn sings, church involvement and activism is humbling. Their protests echo the concern the ancient prophets had for Israel. It would often be easier for them to leave the church and look for secular communities which are fully accepting, but some LGBTQ people stay. I pray that if I were the one being excluded, I would have the patience and the grace I saw demonstrated by LGBTQ people working for change at convention. Instead of vilifying them, we should thank them for their love and learn from the grace they have shown in their relationships with us. They have much to teach us.

I pray that MC USA and Evana realize that avoiding conflict by ignoring the voices of LGBTQ people is not true peace and that we move forward to a future in which we all can be church together without discrimination.

[6] Resolution on the Status of the Membership Guidelines, http://mennoniteusa.org/wp-content/uploads/2015/05/ResolutiononStatusofMembershipGuidelines_Final.pdf