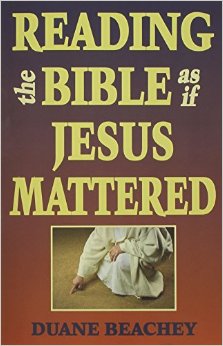 This book is neither a Bible commentary nor a Bible study. It is a personal reflection based on a life of pastoral ministry and social service. The author is now serving as pastor of two small Presbyterian churches in Kentucky. Earlier, he was pastor of San Antonio Mennonite Church for eight years and, with his wife, Gloria, spent eight years with Mennonite Central Committee in Appalachia. He has also been involved with peace and housing activities in Oklahoma and Texas. 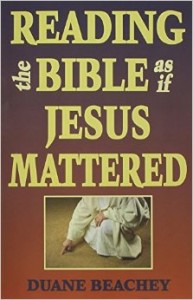 A descriptive summary at the beginning of the book indicates that Beachey “tackles inerrancy, fundamentalism, creationism, the culture wars, prophecy, nationalism, materialism, war, wealth and same-gender relations.” This, indeed, is what we will find.

Especially, the author has had it up to here with fundamentalists who insist on an inerrant Bible but ignore or downplay Jesus’ teaching against greed and violence. So, if we do not have an inerrant Bible, what do we have? As Bible scholars will tell us, we have the work of writers who believed in God and wrote a message for their own time. If we impose certain assumptions from our own time on Scripture, we distort the interpretation and hamper the message.

Here are some of Beachey’s reflections as he works his way through chapters on fundamentalism, creationism, C.S. Lewis and dispensationalism, all of which he finds weighed in the balances and wanting. The first is too much like modernism: “As historic movements, both Modernism and Fundamentalism were based on a fact-based way of looking at the Bible. Inheritors of either movement rely on modern understandings of wisdom, which deal in facts and proofs. Both claim more than they should.”

In the chapter on creationism, Beachey contrasts Israel’s stories with those of other cultures: “Israel’s stories of creation are unique among such narratives. Their stories tell of a God who simply speaks the world into existence. There is no struggle or battle, or birth pangs.” He notes that both of the two creation stories (Genesis 1 and Genesis 2) are needed “to complete a picture of God who is both transcendent and omnipotent but also imminent and personal.”

He adds: “We do a disservice to these stories when we woodenly force them to answer contemporary questions of scientific and historical accuracy.”

Beachey suggests that C.S. Lewis, who wrote the charming Narnia tales, “only half-believed in Narnia.” In an essay on “Why I Am Not a Pacifist,” Lewis “doesn’t quote Jesus or Scripture but resorts to ‘common sense’ and natural law (how the world operates — dog eat dog),” Beachey says. Usually a creative thinker, Lewis here is thoroughly conventional. His argument, Beachey says, “is pretty much how most of the Christian church, as well as the secular world, approaches the issue of war and the use of violence.”

In a chapter on “Jesus and Israel in Prophecy,” Beachey comments on the work of dispensationalists John Darby and Cyrus Scofield and the anomaly of Christians supporting the modern secular and violent state of Israel because they see it as a fulfillment of prophecy. He asserts that “Israel today is everything the prophets of old condemned.” On the other hand, we have the tragedy of Palestinians responding with violence, and he believes “there would be a Palestinian nation today if Palestinians had refused all violence. But, like many Christians, they bought into the myth that sometimes you’d have to use violence to protect your people.”

In a discussion on “The Dialogue Within the Bible,” he writes, “These aren’t things I have settled opinions about except that I’m open to considering the possibility of different voices within Scripture carrying on a conversation or even debate about what God and faith are about.”

His final chapter, “Jesus’ ‘I Have A Dream’ Speech” begins: “Jesus came preaching good news. If we take what he said honestly . . . he talked almost exclusively about people accepting God’s love and forgiveness, changing their old ways of thinking, and living in a new way centered on love for God and neighbor. He referred to this new life as entering into God’s reign.”

It appears that Beachey is ready to talk with anyone who considers anything he has written objectionable. I find him an authentic Mennonite voice, stressing an old Anabaptist principle: using Jesus as a guide to interpret Scripture.

Daniel Hertzler, of Scottdale, Pa., is a former editor of Gospel Herald and the recent author of On My Way: The View from the Ninth Decade.