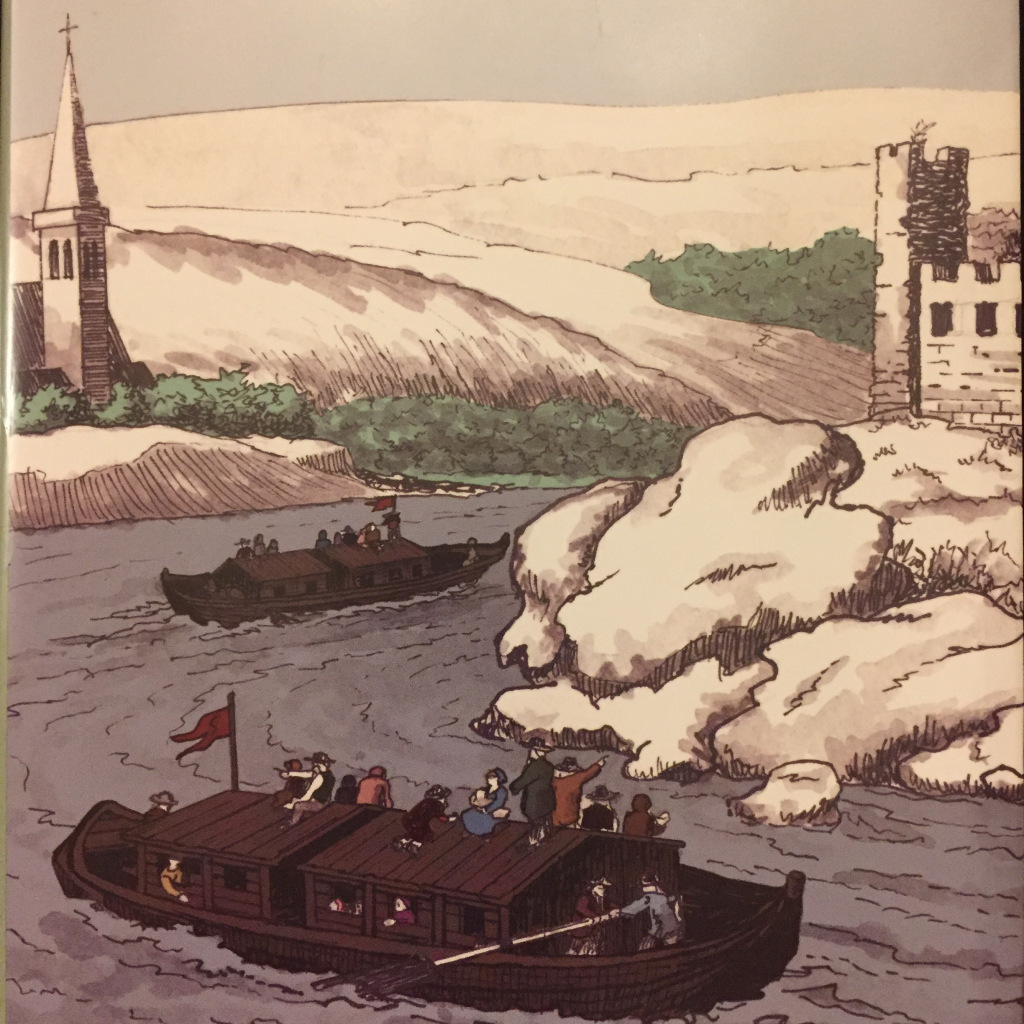 Gerald J. Mast is Professor of Communication at Bluffton (Ohio) University. This piece originally appeared on his blog, Anabaptist Persuasion.

On July 13, 1711, Christian Stutzman and Magdalena Stucki left their home in Bern, Switzerland to travel north down the Rhine River on a boat headed for the Netherlands. Christian was a 34 year old farmer and member of the Reformed Church whose 37 year old wife Magdalena had been baptized into an Amish congregation. Because of Magdalena’s membership in an Anabaptist church, they were being deported by the Bern authorities, along with nearly 350 other Amish and Reistian Swiss Brethren from Bern who left their villages and farms behind to become refugees looking for a safe home across the border.

The refugees on the boats going north carried names such as Eberly, Gerber, Habegger, Jost, Kropf, Meyer, Miller, Moser, Reesor, Raber, Roth, Rupp, Schirch, Schmid, Schlabach, Schwartzentruber, Sommer, Stucki, Stutzman, and Wenger, to list just a few. These Swiss refugees found hospitality in Dutch Mennonite communities that had advocated on their behalf with both Dutch and Swiss authorities. Fifty years later, Christian Stutzman appeared in the records as an Amish minister in the congregation at Kampen. Some of the descendants of these refugees, like those of Christian and Magdalena, eventually ended up in North America.

The details of this deportation and the many decades of harassment and persecution endured by Swiss Anabaptists in the 1600’s and 1700’s are found in two volumes of source documents from the Stadtsarchief Amsterdam, newly transcribed and translated by James Lowry and published by the Ohio Amish Library under the title Documents of Brotherly Love, vols. I and II. These letters and transcripts provide evidence for the persistent and costly work of the Committee for Foreign Needs formed by various Dutch Mennonite groups to provide legal, political, and monetary assistance to persecuted Swiss Anabaptists in Zurich and Bern. For example, in 1671, the Swiss authorities deported around 700 Anabaptists to the Palatinate, punishing those who returned back over the border illegally by imprisoning them and/or branding them with a hot iron. Frustrated by the number of returning refugees, the authorities eventually sold some of them as slaves to row on galley ships. The Dutch Mennonites intervened by advocating on behalf of the refugees, providing money and other assistance for resettlement in the Palatinate, and sending delegations to visit the refugees to check on their well-being.

Why were these Anabaptist farmers so despised by the Bernese authorities that they were uprooted from their homes, many of them imprisoned, and eventually sent north? One reason is that the Swiss Anabaptists were stubborn nonconformists who declined to participate in the official civic Christianity of Switzerland. They refused to swear oaths of allegiance and they were unwilling to take up arms in defense of their homeland. They also disobeyed the numerous mandates against them, often returning illegally to their land and families after being expelled by the authorities.

More broadly, many of their neighbors and some of the civil authorities regarded the Anabaptists as both a religious and a security threat. Repeatedly, the Swiss authorities identified the Swiss Brethren with the violent Anabaptists at Münster who abolished private property and established polygamy in 1534-35, as well as with Anabaptists who had participated in the German Peasants Revolt of 1525 led by Thomas Müntzer. Johannes Ludwig Runckel, the Dutch ambassador to Switzerland who was given authority to negotiate with Bern authorities about their Anabaptist issues, lamented in a letter to the Committee for Foreign Needs that “most government officials here do not know what the characteristics of the Mennonites actually are, nor know what kind of distinction to make between them and the Müntzerite and Münsterite Anabaptists. Rather, they blindly believe as gospel all which the opponents and persecutors of the Mennonites charge them with.”

Runckel’s presence in Bern as a negotiator on behalf of the Amish and Reistian Swiss Brethren was due in part to the political advocacy work of the Dutch Mennonites, who had come to see these Swiss dissenters as their brothers and sisters in faith, even though Swiss Anabaptism originated in a different milieu than did Dutch Anabaptism. Of course, the Dutch Mennonites also remembered a time when their churches were branded with being “Münsterites” and subject to mandates and harassment. For years following the end of the Münster regime, a band of Anabaptists led by a former Münsterite named Jan van Batenburg sought to destabilize the social order by plundering churches and monasteries. Memories of the Münster regime and Batenburger crime plagued Anabaptist communities who struggled to distinguish their peaceful churches from Münster and its aftermath.

We should acknowledge, to be sure, that the story of the Mennonites is indeed connected to the story of Münster. For example, the Martyrs Mirror includes the story of the songwriter Anna Janz, who converted from the revolutionary Anabaptism of Münster to the spiritualist nonresistance of David Joris before she was captured, imprisoned, and executed. Anna left behind an influential and eloquent letter to her son, Isaiah, explaining her apocalyptic, yet peaceful, faith convictions.

Menno Simons, like numerous other peaceful Anabaptist leaders, had personal connections to Münsterite leaders. He was baptized and ordained by Obbe Philips, who had been baptized and ordained by Münsterite missioners. Scholars think it likely that Menno’s younger brother Peter was part of a band of armed Anabaptists who occupied the Oldeklooster monastery in April of 1535 and were defeated after a battle in which Peter was killed. When Menno left the Catholic church that year to join the Anabaptist movement, he was joining a discredited radical conventicle that was regarded as a threat not just to orthodox Christianity but also to the social order itself. Menno devoted much of his pastoral work and writing to distinguishing peaceful Anabaptism from militant Anabaptism and to building a network of congregations that displayed the peace and holiness of the New Jerusalem in their life together.

But Menno did not live to see tolerance of Anabaptist churches in the Low Countries and Northern Germany where he ministered. He and his family lived on the run as fugitives and refugees from civil authorities who never managed to apprehend him, even though they placed a price on his head of 100 guilders. As late as 1554, the city council of Wismar—where Menno had lived for a time—voted to expel Anabaptists from the city.

By the time Dutch Mennonites formed a relief committee to assist the beleaguered and persecuted Swiss Anabaptists in the late 1600’s, Dutch Anabaptism had experienced a century of toleration and growing affluence. But because of books like the Martyrs Mirror, they remembered their heritage as a people on the run—ready to “flee for the Lord’s sake from one city or country into another, and suffer the spoiling of our goods,” as the 1632 Dordrecht Confession of Faith puts it in article 14. This memory of a refugee past strengthened their solidarity with Swiss Anabaptists who were threatened with deportation and imprisonment.

The actions taken by the Dutch Mennonites in support of Swiss Anabaptist refugees can inspire our actions today on behalf of people on the run because of religious or political persecution or because of war. Because our faith ancestors were often wrongly associated with the violence of extremists in their faith communities, we should be sympathetic to those of our neighbors who are falsely blamed for the violence of their co-religionists. Because our faith ancestors often broke the law in order to stay connected with their families and property, we should find solidarity with undocumented people who cross borders illegally for the sake of personal survival, financial needs, or family relationships.

Moreover, we can be inspired by the work of the Committee on Foreign Needs in at least five areas.

In a 1708 letter urging organized support of the persecuted Swiss Anabaptists, Jan Freriksz from Deventer described the conditions that led Christian leaders to attack Anabaptist communities in Switzerland, threatening them with prison, deportation, and galley slavery. He writes that “as long as there are followers of hatred and as long as there is hatred, especially that which originates in pseudo-religion, there will be persecution: one time less, another time more.” Freriksz cited a proverb: “Theological hatred is satanic hatred.” The causes of persecution have not disappeared, nor have the needs of persecuted refugees that require the advocacy and generosity of the church.