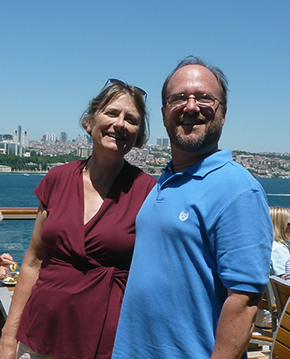 A 40th anniversary tribute to Gerald

It’s one of my husband’s favorite lines: “With my body I thee worship.”

It may seem unseemly to mention it here, in a public blog post, by an institutional president.

But the line is taken directly from a public liturgy; a marriage liturgy of the Anglican Book of Common Prayer.

It boldly declares for all to hear that marriage includes bodily devotion to one’s partner.

This public declaration, with its poetic beauty, is held within the deep wisdom of a traditional, communal recognition that keeping faith (fidelity) with one’s partner is profoundly good. That this bodily honoring of one’s partner is declared within public worship of our Creator God makes all the difference in the world.

I long for a bolder assertion by the church in our day that decisions about whom one sleeps with belong in public worship.

It is in our communal interest, our children’s interest, and our personal individual interest to reclaim the wisdom of the traditional assertion that for all involved, a decision to have sex with a partner should involve a public declaration of devotion to the body of that partner in the context of worship.

This declaration belongs in the church as the Body of Christ for the safety, integrity, and shared goodness of all involved.

Or, to put it simply: being trustworthy within one’s public commitments.

Covenantal fidelity assumes that marriage is bigger, deeper, wiser than any individual who enters into marriage, he said.

Covenantal fidelity assumes that without the confidence that promises can be made and kept, love must always be held back, guarded. If sex truly makes two people “one flesh” as Scripture teaches, then sex outside of a covenanted relationship doesn’t allow us to say with our spirits what we say with our bodies. A part of us must always be held back.

In marriage we make love with all of who we are: body, mind and spirit.

With my Body I thee worship, and with all my worldly Goods I thee endow: In the Name of the Father, and of the Son, and of the Holy Ghost. Amen.

Granted, the language is a tad archaic. Updated contemporary vows use alternative phrases about honoring and cherishing. But something solemn and beautiful is lost in the alternatives.

My husband reads Richard Rohr regularly and occasionally sends me a gem.

In a recent post called the “Universal Dignity in a Debauched Empire,” Rohr observes that the apostle Paul offers “a theological and solid foundation for human dignity and human flourishing that is inherent, universal, and indestructible by any evaluation (race, religion, gender, nationality, class, education, social position, etc.).” Paul brings a profound new sense of the inherent dignity of every human person “which was unheard of before his time.”

One of the reasons Paul’s teachings had so much influence, Rohr continues, is because human dignity was at such a low ebb—with widespread slavery, women regarded as property, temple prostitution, and with wholesale injustice toward the poor and outsider as the “universal norm.”

When Paul declares: “You, all of you, are sons and daughters of God, now clothed in Christ, where there is no distinction between male or female, Greek or Jew, slave or free, but all of you are one in Christ Jesus,” (Gal 3:26-28) this would have seemed both impossible and “utterly attractive and hopeful to the 99% who had no dignity in that society.”

Perhaps this explains why Christianity spread so rapidly.

Who doesn’t want, asks Rohr, to be told they are worthy and good; that no longer is the human body a “cheap thing, degraded by slavery and abuse” but that “you are the very temple of God”?

This isn’t the finger wagging, moralistic message we often associate with Paul’s claim that bodies are temples of the Holy Spirit. No.

It’s about reclaiming the dignity of our flesh-and-blood bodies, refusing to cheapen that dignity, and respecting boundaries that honor that dignity.

It also means honoring the bodies of those with whom we sexually couple by making public covenants within a community of integrity; within the Body of Christ that commits to hold us through sickness and health, threats and discord, tragedy and celebration, and above all, into worshipful thanksgiving for all that is good.

After 40 years of being held and holding each other through floods of tears and pealing laughter, shattering grief and miraculous healing, humbling failure and surprising joy, with my body I worship and give thanks.

Wenger Shenk is the president of Anabaptist Mennonite Biblical Seminary, Elkhart, Ind. This originally ran on her blog, Practicing Reconciliation, on June 5.