Vanessa Hofer, for The Mennonite 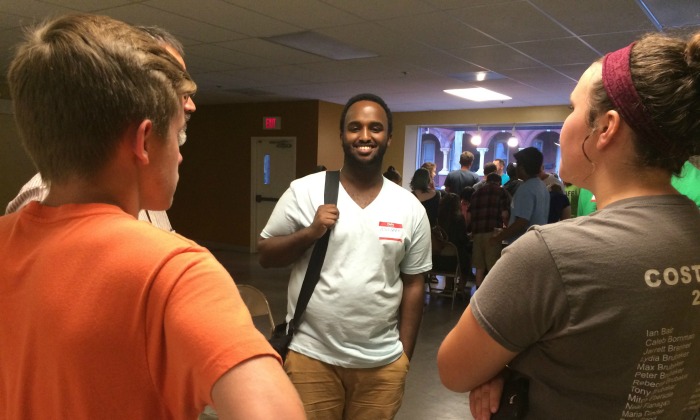 Photo: Mustafa Nuur, a recent immigrant to Lancaster, Pennsylvania, shared some of his family’s story with over 100 youth and youth leaders during the Welcoming Refugees Youth Night, co-sponsored by Church World Services Lancaster and Eastern Mennonite Missions. Photo by Vanessa Hofer.

Mustafa Nuur was 13 years old when he and his family fled their home country of Somalia.

They would spend nearly a decade in Kenya, both in Dadaab, the world’s largest refugee camp, and the city of Nairobi. While there, Nuur would learn English from Mennonite missionaries.

Now, Nuur and his family—seven siblings and his mother—live in Lancaster, Pennsylvania. They have been stateside for a year and a half.

“It has been the craziest year of our lives,” Nuur said.

Twenty-three-year old Nuur was the guest speaker at the Welcoming Refugees Youth Night, a co-effort of Church World Services Lancaster and Eastern Mennonite Missions. The event, held June 15 at EMM’s new downtown Lancaster location, was designed for teens, youth groups and youth group leaders from across the county. Nearly 100 were in attendance, representing over half-a-dozen area congregations.

The event coincided with World Refugee Day on June 20.

Nuur told the group about the difficult transition from Kenya, specifically for his younger siblings, who did not know English before arriving.

During his first days in Lancaster, surrounded by closed doors and quiet residential streets, Nurr thought the city was empty. For a while, he assumed it must be a holiday.

“We come from an environment where everybody is interacting. It was a big cultural difference,” Nuur said.

Paired with Nuur’s personal story, statistics from the United Nations High Commissioner for Refugees (UNHCR) framed the evening: To date, over 50 million people have been displaced around the world and 20 million forced to leave their country as refugees. Half of those 20 million are under the age of 18.

“There are a lot of people who are coming here. Tonight we want to try to have a little better understanding of how we can be involved in welcoming them,” said Earl. “You matter. As youth, these are your peers.”

Among the evening activities were short films documenting the journey of refugees internationally, role-playing exercises completed in small groups, and the opportunity to crafts cards for families to receive upon arriving in Lancaster.

Brynn Hackett, a Lancaster County native who now attends Temple University in Philadelphia, shared her story of volunteering and raising funds for CWS throughout high school. Hackett founded TAK(E) CHARGE, a program for students to raise money and awareness for refugee resettlement in Lancaster.

“It’s amazing how much you learn when you just listen to people who have often been neglected,” Hackett shared. “The biggest thing I’ve learned is the power of community. There is so much you can do.”

In Nurr’s experience, it has been the seemingly small things that have made the biggest impact. His younger siblings are still in school, and although Nuur says they have dealt with bullying, including youth who have asked them to leave the States, they have also encountered kindness.

He asked the teens to remember that refugees are not so different. He encouraged them,  “Know your neighbor’s story. Ask them, ‘why are you here?’ A simple question like that can lead to a four-hour conversation.”