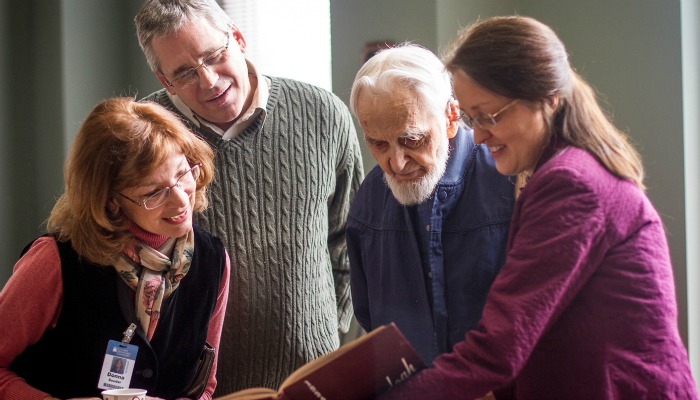 Amos Yoder ’54 looks at a yearbook held by his daughter, Rebecca Barbo, with Donna Souder and Doug Nyce, of alumni relations. Yoder, 98, visited the campus for the first time since graduating with a bachelor’s degree in German 61 years ago. He was a teacher in Amish and Hutterite schools in the Midwest. Photo by Jon Styer.

“It is an honor that you’ve come to visit us,” Martin said, clasping the hands of 98-year-old Amos J. Yoder.

Much was made of Yoder’s visit, the first time he had set foot on campus since graduating in 1954. He may be EMU’s oldest living graduate.

There was a reason Yoder left campus right after commencement and crossed four states quickly heading west, according to daughter Rebecca Barbo, who lives in nearby Dayton.

While at EMC, Yoder was trading letters back and forth with an Amish woman named Sara Miller.

The couple married in June 1954 in Iowa. Yoder began a long teaching career in the midwest, the couple raised six children, and he just never managed to make it back to Virginia.

Rebecca says her father always carried fond memories of his time in Harrisonburg. “He’s an intellectual, always thinking about something, so being here and having the chance to study and learn was really important to him.

“When I was growing up, he would tell us these stories about coming here and going to school, and it was almost other-worldly, the way he described it, with this sort of ethereal beauty. It was a very important place to him. I knew that when I was able to convince him to come and visit me that we would have to come back.”

Last week, Yoder traveled from his home in Grove City, Minnesota, to visit Rebecca and her husband, who recently returned from nearly 20 years living overseas.

“Up until last summer, Dad was living alone, milking his goats every day,” she said. Rebecca’s mother had died in 2013. “Can you imagine? In the Minnesota winter? So he moved in with my brother and since my brother has a new grandbaby on the east coast he wanted to visit, I said, ‘This is perfect timing. Dad, come and see me.’”

One of four Amish students in the class of 1954

Yoder and his daughter were greeted by a delegation of EMU alumni relations representatives and former classmates, including Doris A. Bomberger and her husband James ’55, Ruth L. Burkholder, Kenton K. Brubaker, and Martin.

“Have you noticed anything’s changed?” asked Laban Peachey, who was dean of students in 1954 when the campus consisted of an awkward-looking “Ad Building” with mismatched additions on each end, Lehman Auditorium, the lower levels of Northlawn which was under construction, an exercise hall (now storage building) north of Northlawn, and a brick observatory on the top of a barren hill. Park Woods cabin was the student recreation area.

When Yoder came to what was then still Eastern Mennonite College in 1949, he was 33 years old. It wasn’t just his age that set him apart.

Martin, his former classmate, says he remembers Yoder on campus because he was one of four Amish students. Although Yoder appears in the 1954 class photo, the Amish aversion to being photographed is reflected in the absence of his individual portrait among the senior class in Shenandoah, the college yearbook. (The 1954 class had 52 students, 48 of whom were Mennonite, including two Japanese students, Itoko Maeda and Taizo Tanimoto, and Harrisonburg native Margaret “Peggy” Webb, the first African-American graduate of EMC).

Six years of service with MCC in the 1940s
Unlike most of his classmates, Yoder was also old enough to have his life completely disrupted by World War II. He was born in an Amish farming community near Weatherford, Oklahoma, and expected to live there for the rest of his life.

To accommodate conscientious objectors like Yoder and nearly 12,000 others, the U.S. government created the Civilian Public Service (CPS), an alternative to military service that provided draftees the opportunity to work on tasks “of national importance.” Many of these projects were agriculture or natural resources-related, though some served in public health or relief work. (For a story about EMU alumni who worked in mental hospitals under CPS, click here.)

Yoder served in Colorado Springs for four years with two MCC-operated units attached to the Soil Conservation Service. When he was discharged in late 1945, war-torn Europe was awash with a flood of refugees.

“I was given the opportunity by MCC to enter relief work and I decided maybe I could help somewhere,” Yoder said, “so I volunteered and was sent to Paraguay for two years.”

MCC purchased two large tracts of land, on which eventually settled more than 4,800 refugees within what became the Volendam and Neuland colonies. This added to the sizable population of Mennonites that had been living in Paraguay since 1928.

After his service with MCC in Paraguay, having plenty of practice speaking German with refugees, Yoder arrived on campus to continue his language studies.

A life of teaching and farming
In 1954, newly graduated and newly wed, Yoder spent 13 years teaching in Iowa in Amish schools. Rebecca, who was taught in a one-room schoolhouse by her father, says one of his professional goals was to improve and reform the Amish school system. Most teachers only had an eighth-grade education, she said, and her father brought not only pedagogical training but also life experience to the sheltered classrooms he taught in.

During summers off from teaching in the Amish schools, he attended Iowa State University for five sessions and earned a master’s degree in education.

“Then I decided to have a little change,” he said, “and I found employment with the Hutterites at Birch Creek Colony in Montana. That was something of an undertaking. I had to learn to think like a Hutterite and that takes some doing, me being an Amishman. But it worked out and we got along just fine.”

Yoder and his family moved to Glacier Colony, a Hutterite community near the Canadian border, the following year, followed by a return to Amish schools in Iowa and Ohio. He retired from teaching in 1972 and moved to Minnesota, where he still resides.

His educational experience at EMC was “one of the high points of my life,” Yoder recalled, as he leaned on his cane in the president’s reception room at the campus center, surrounded by eager listeners. “It did influence me. Very much.”