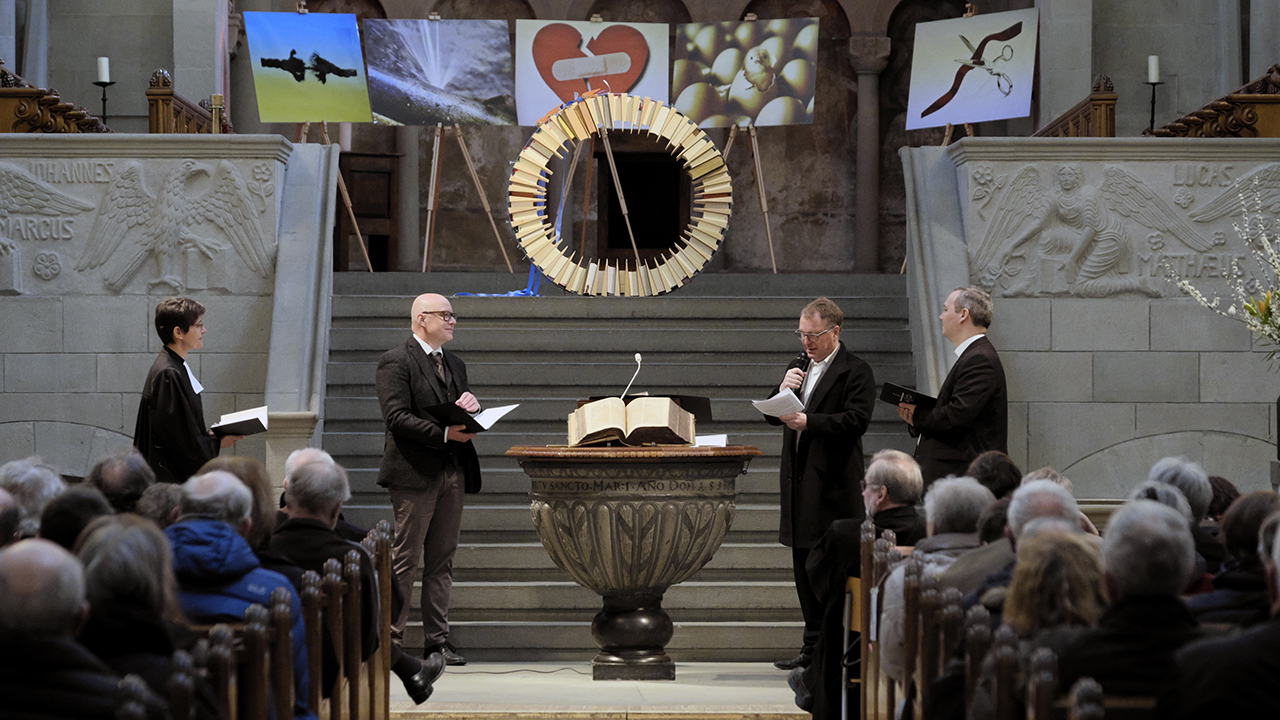 Three years before the first adult baptisms marked the beginning of the Anabaptist movement in Zurich, Switzerland, the Swiss Reformation was instigated by a group of men who gathered in the same city to break the law of church and state by eating sausage during Lent.

Commemorative events marking the 500th anniversary of the “sausage rebellion” took place in early March in Switzerland and Pennsylvania. Both were opportunities for religious groups who have drifted apart to eat more sausage and worship together in the name of shared understandings.

In early March 1522, a group of people seeking renewal of the church gathered with Ulrich Zwingli, then a Catholic priest, at the home of Christoph Froschauer, a Zurich printer. They ate sausage together, breaking the law of fasting to rebel against church laws that seemed unbiblical. The meal represented the freedom in Christ that Martin Luther had called for already in 1520. It is considered not only a symbolic beginning of the Reformation in Zurich but also a precursor to the Anabaptist movement.

After enjoying refreshments, including sausage, outside Zurich’s towering cathedral, Swiss Reformed, Catholics and Mennonites filled Zwingli’s old church March 6 for a worship service that culminated a weekend of events focused on what led into and out of that fateful day 500 years ago.

Lukas Amstutz, co-president of the Conference of Mennonites in Switzerland, said the service picked up where Anabaptists departed from sitting at the same table with others who dreamed of renewing the church.

“The service was intended to show that it is possible to overcome centuries of open hostility and to seek together how we can be witnesses of God’s reconciling action,” said Jürg Bräker, the conference’s general secretary.

The 1522 moment of unity at Froschauer’s table did not last long. Divisions, oppression and war soon followed. The Reformed Church separated from the Catholic Church, and later the Anabaptists separated from the Reformed Church. The service in Zurich may have been the first that the three churches officially celebrated together. Bibles from the three traditions, including 20 from Mennonite churches, were formed into a circle by Catholic artist Hans Thomann as a focal point of unity.

John D. Roth, longtime Goshen College history professor who is now serving as project director for MennoMedia’s Anabaptism at 500 initiative, attended both that worship service and another a day earlier across the street at the historic Water Church, which he found especially moving.

“Catholics, Reformed and Mennonites openly recognized the divisions in the church that emerged in the years following the decision to break the Lenten Fast at the Froschauer printshop, but they also concluded by naming specific gifts each tradition had received from the other, followed by a spontaneous prayer of blessing,” he said. “In the end, we all joined in prayer for those suffering in Ukraine and called on Christians everywhere to denounce war, extend compassion to refugees and work for peace.”

Across the Atlantic Ocean in Chambersburg, Pa., people from several Anabaptist groups across the East Coast gathered for what Linden Showalter of Waynesboro initially thought would be a few friends gathered in his kitchen to talk history and eat sausage.

But word got out, and Marion Mennonite Church’s fellowship hall ended up filled with more than 100 people enjoying a meal of Berner sausage and Swiss cheese on March 9. Guests from Old Order River Brethren to Mennonite Church USA eventually made their way to the sanctuary for a time not of celebration but remembrance.

Showalter spoke on what took place in Froschauer’s home in 1522 and the events that led to adult baptisms three years later. Others who shared included historians John Ruth of Franconia, Amos Hoover of the Muddy Creek Farm Library in Ephrata and Roth, fresh off a plane from Switzerland and carrying a blessing for Mennonites from Swiss Catholic and Reformed leaders.