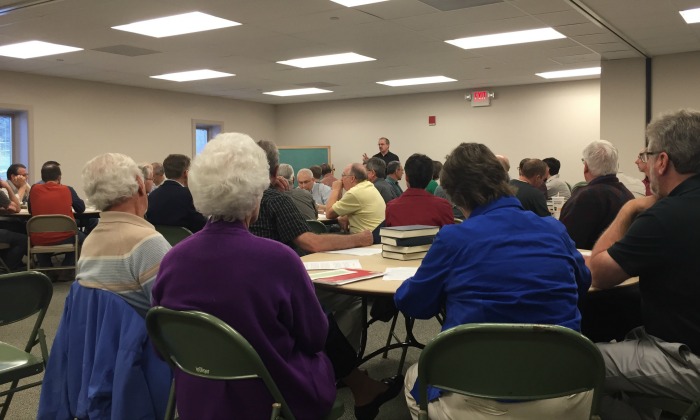 Fifty-two pastors and other leaders gathered in Lancaster, Pa., on April 30 for the first formal discussion of a document called “A Radical Center.”

The document grew out of conversations of the Landisville Manor district of Lancaster Conference. (Click here for the Radical Center document.)

The document seeks to “embrace a Christlike radical center,” amid polarizing issues in Lancaster Conference.

The document states: “The conference has a historic opportunity to work through our differences in a way that strengthens unity and does not require a solution in which congregations must decide which ‘side’ of the split they will follow.”

During the meeting, table groups suggested the following paths forward:

1. We need all the voices—a traditional voice, a progressive voice and all the voices in between—to be the church.
2. We will look for the theological nuggets that keep us together.
3. We will personally choose forbearance.
4. We will control the process and let the Holy Spirit control the outcome.
5. To form a group for a path forward focusing on mission, the Holy Spirit and Scripture that finds a way to serve, be served by and serve with LGBTQ community members in this discernment process.

Beth Good, leader of the writing team that composed the document, said they are intentionally not naming the issue of LGBT inclusion specifically in their document.

While it is the current conflict, she said, there will be another issue in the future that we will wrestle with in the church.

“We need to find another way to walk through these things together,” Good said in an interview on May 1. “We want to be able to challenge one another in a safe space and not secretly undermine one another.”

Good is an ordained leader in Lancaster Conference. Beth and her husband, Clair, give leadership to Vision Columbia, a church plant, in Columbia, Pa.

Good also said this group is not a new network or denomination; neither are we “anti-Evana.”

“We see an opportunity to do things differently,” she said. “Our history doesn’t have to be our destiny.”

The “living document,” as Good describes it, has been submitted to Lancaster Conference’s bishop board.

“This isn’t a final draft,” said Good. “We want to keep exploring.”

Photo from the meeting by Marian Thomas.