Rich Preheim for The Mennonite 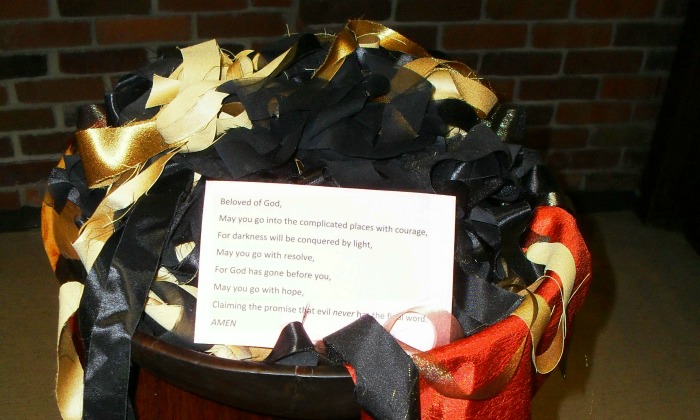 A basket of cloth strips used to symbolize Yoder’s victims’ pain. It was used in the morning service and left out for display in the afternoon. Photo by Rich Preheim.

For 40 years, women who had been sexually violated by John Howard Yoder were left suffering in silence while the Anabaptist Mennonite Biblical Seminary professor became one of the most influential theological voices of the 20th century.

In a “Service of Lament, Confession and Commitment” in the seminary chapel, seminary president Sara Wenger Shenk solemnly told victims and nearly 200 other people: “I am sorry that we neglected to genuinely listen to your reports of violation and that even after hearing your warnings, we failed to raise the alarm.

“I am sorry that by choosing to remain silent about your violation, we isolated you, only deepening your sense of betrayal. I am sorry that in our exhaustion and desire for closure, we didn’t listen to those of you who said this is not finished, the full truth of what happened has not yet been named.”

The service was a milestone in the decades-long epic.

Starting at least in the 1970s, Yoder sexually harassed and assaulted perhaps more than 100 women worldwide, according to historian Rachel Waltner Goossen, who earlier this published a major article on Yoder’s abuses and the church’s response.

While exploring the theological dimensions of sex, love and community, Yoder was able to continue his activities.

Miller’s efforts were unsuccessful, and he finally forced Yoder’s resignation in 1984.

“Whether out of institutional hubris or with every intention for good, we gave pride of place to intellectual prowess, to the powers of the mind, with too little regard for how they can be twisted in self-serving, evil ways,” said Shenk, who repeatedly received amens and murmurs of appreciation from the audience.

Since 1991, a network of victims has been providing mutual support and pushing AMBS and other Mennonite bodies for a more appropriate response to them and other women who have suffered sexual abuse.

“There is no excuse when a theological school that is dedicated to teach what is good and true and beautiful about the gospel fails in a most egregious way to comfort those who mourn, to bring good news to the oppressed, to bind up the broken-hearted and proclaim liberty to the captives,” Shenk admitted.

“Whether through misnaming, or negligence, or avoidance or fear of scandal, we failed the sacred trust of the church. We failed what we know to be most true about the gospel. We failed you.”

The service also featured the announcement of a Mennonite Church USA “Care and Prevention Fund” to help people who have experienced sexual abuse. That includes partially reimbursing victims of Yoder or any Mennonite Church USA credentialed leader for the costs they incurred “on the road to healing.”

The denomination is accepting contributions for the fund through the end of August.

Evelyn Shellenberger apologized for allowing Yoder to continue his misconduct.

She is a former seminary board member and chair and was a participant in some of the theological discussions with Yoder. “I held significant responsibility to guide the disciplining,” she said.

Speaking on behalf of the board, current members Dave Brubacher and Ron Guengerich committed AMBS to do everything possible to ensure that allegations of sexual abuse are addressed quickly and forthrightly and provide a safe environment, including the possibility of calling law enforcement.

She had rebuffed Yoder’s advances while a student and was a confidant to a number of his victims.

Good was also instrumental in the formation of the women’s advocacy network, whose work led to AMBS’s reconciliation measures.

A similar response is expected at Mennonite Church USA’s biennial convention in Kansas City in July.

In response to the speakers during the afternoon service at AMBS, Good said, “We have heard. We acknowledge your confessions and apologies. And in response we extend deep gratitude to you.”

The morning of March 22 was devoted to a closed “intimate gathering of truth-telling, reflection and prayer” for the victims, their supporters and members of the AMBS community.

It included a prayer walk through Waltner Hall, the main seminary building and site of much of Yoder’s abuse.