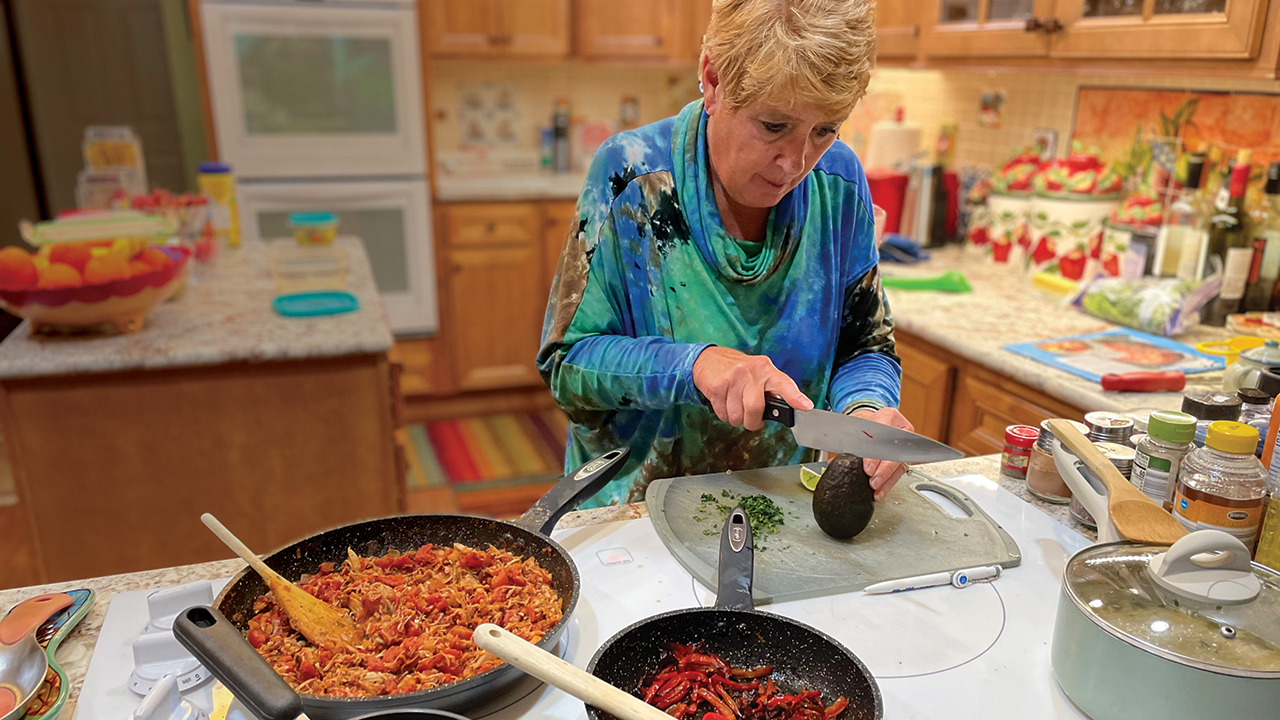 Sharon Risser’s adventures in cooking began at the age of 12 when her mother offered her a job. It would be in their home, planning and cooking each evening meal, cleaning the house, doing the laundry, plus ironing.

Risser wanted to go to college and become a nurse. Her parents encouraged her and said she’d need to earn money. But opportunities were scarce for a 12-year-old.

So, she eagerly began her job by looking through her mother’s cookbooks such as Mennonite Community Cookbook, Good Housekeeping Cookbook, Betty Crocker and others.

“I liked the cookbooks with pictures so I could see what something looked like,” Risser recalled.

She would plan menus by Thursday evenings so her mother could get the groceries on Friday, which is how Risser operates to this day. She’s a die-hard menu maker with a kitchen full of obscure spices and flavorings.

Pre-teen Risser started out making traditional dinners. The brothers might complain if it was a casserole with “food all mixed together.”

With her own family later, husband Doug and son Jay were open to more adventuresome dishes, and now ­grandson Jaxon is willing to give things a try.

“But I sometimes cook something extra — a recipe I’ve found in a magazine for the adults, with goulash or spaghetti for the children,” she said, gesturing to a 3-inch stack of recipes she plans to try.

She needs quite a stack because she normally makes a different recipe every time she cooks, which is usually six times a week. Today the Rissers share meals almost every evening with her 90-year-old father, Charles Shenk, who lives across the street at Waterford Crossing in Goshen, Ind.

From those early days of meatloaf, sloppy joes or spaghetti, Risser expanded her horizons. The couple, members of Eighth Street Mennonite Church, have a New Year’s Eve tradition of inviting friends to a four-hour, seven-course meal, frequently featuring dishes from their world travels.

Doug was co-owner of Menno Travel Service in Goshen for many years. He first tasted life in another country through a college summer in Colombia, and then served in Bolivia for two years of alternative service during the Vietnam War. Sharon’s first international experience was living in Honduras with Goshen College’s Study Service Term.

She feels she has become a better cook over the years.

“I remember thinking it was necessary to cook food until it fell apart, but then it was dry as all get out,” she recalled. But through food features in magazines and watching Food Network, she has learned to cook by temperature rather than time.

“Cooking provides a strong creative outlet,” Risser pointed out, which is not only beneficial for her, but the satisfaction it brings other people. “I can prepare something that people say, ‘Oh, this is good.’ ”

Risser throws away recipes she’s cooked: “If I kept everything, you’d call me a hoarder.” She estimates she has thousands of recipes she’s pulled from magazines: “I have about 10 three-ring binders holding recipes I want to try.”

As retirees, the Rissers love traveling “to be exposed to new cultures, food and ideas that I can bring back to share with friends.”

She often buys a cookbook when traveling. In their trip to Egypt last November, she bought an Egyptian cookbook in English and planned one of their marathon seven-course meals this past New Year’s Eve.

“People come to the house at seven, we eat for four hours, usually get done with dessert about 11:30, get out champagne or sparkling grape juice, toast the new year, and then guests go home,” she said.

She and a friend once got to enjoy a 10-12 course meal prepared by Paul Bocuse, a five-star chef in France. “We got to a restaurant at 7 p.m. and didn’t leave until 11.” They were served small portions, with each course featuring a different flavor.

Risser noted that some of us “gulp our food way too fast, because we aren’t fully enjoying the flavors, and the slow process of conversation with mindful appreciation of food.”

Traveling has impacted her faith through learning about and appreciating other cultures and religions. Discovering the differences between Hindu faith in India and Singapore was one example. The Rissers have learned there are a lot of similarities in religions, such as similar creation stories.

“We’re not as different as we’d like to think,” she said. “There is something in the human soul that looks for what happens in nature and the world that brings us to a sense of — a divine something.”

Travel challenges her faith — “not to throw it away but to question it and continue to search for answers,” she said.

And her favorite recipe or dish to make?

Melodie M. Davis was a writer/producer for Mennonite Media and Herald Press for 43 years until retirement in 2019. Find her blog posts and recipes at findingharmonyblog.com. Her Memoir of an Unimagined Career: 43 Years Inside Mennonite Media, will be published by Masthof in August. 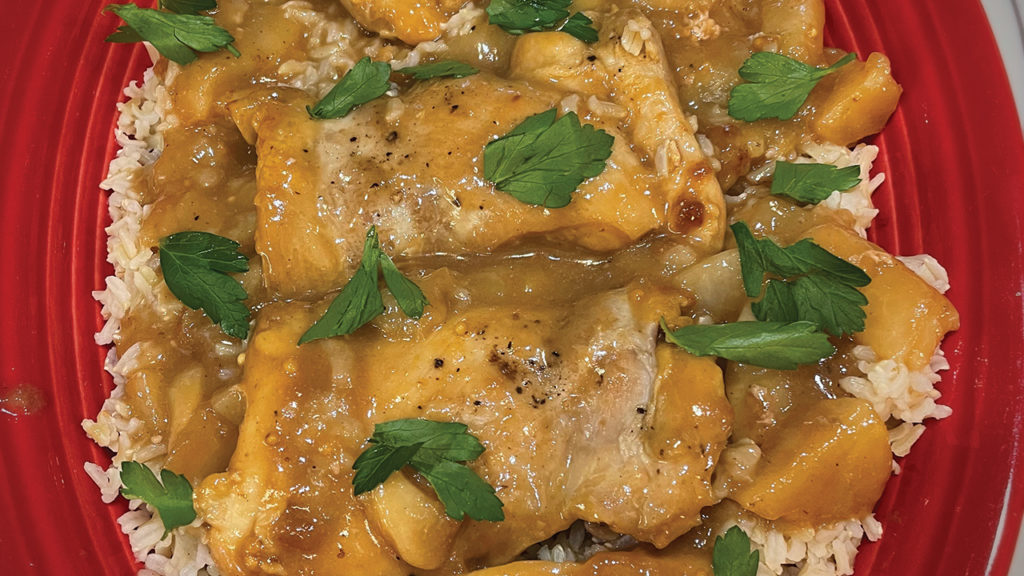 Sprinkle thighs with salt and pepper.

Brown thighs in olive oil on medium high heat, remove from skillet and set aside.

Reduce heat and return thighs to skillet, cover and cook until internal thigh temperature is 165 F.

Serve over rice and top with fresh parsley. 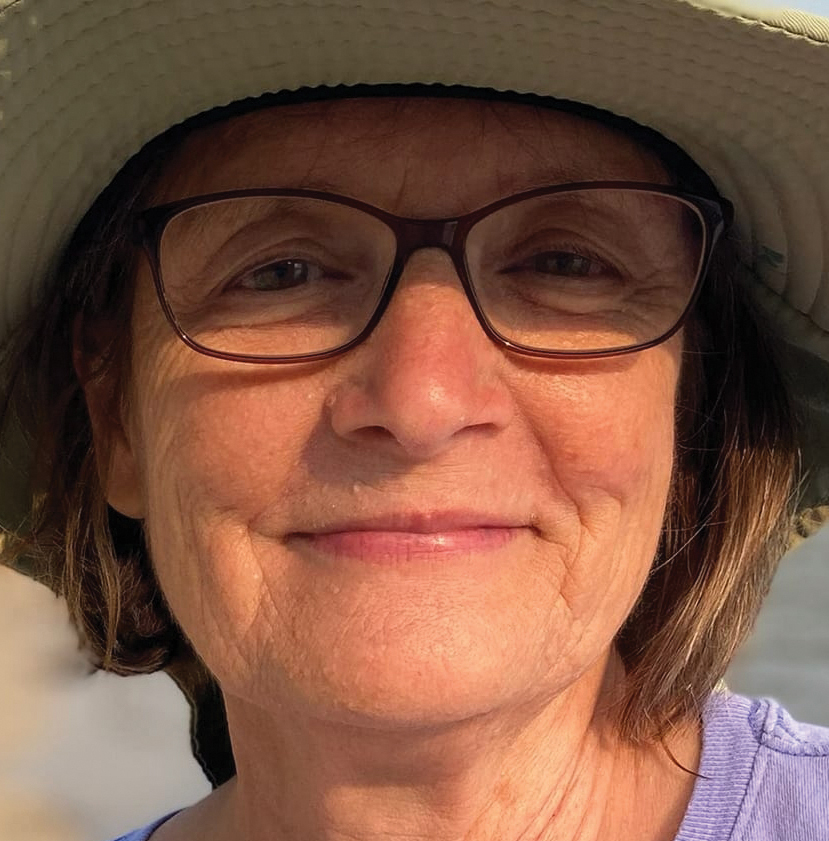