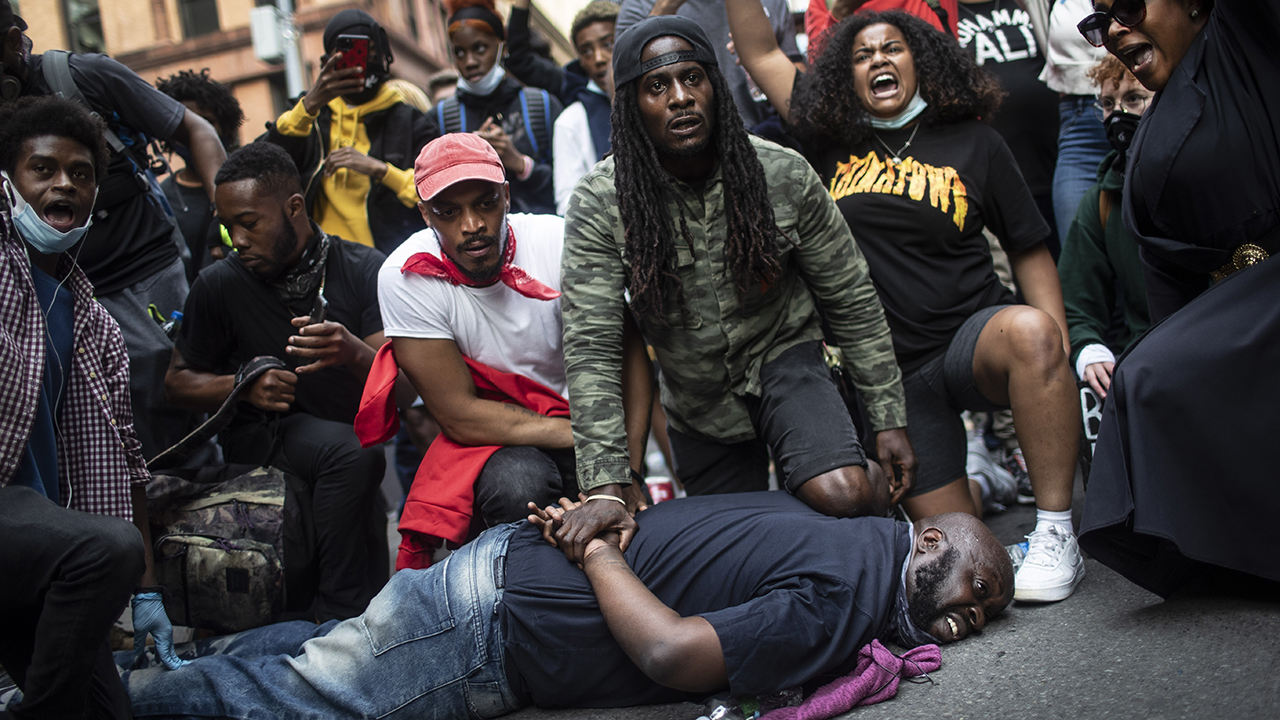 On June 2 in New York, protesters re-enact the scene where George Floyd was restrained by police. Floyd died after being restrained by Minneapolis police officers on May 25, 2020. — Associated Press

Nonviolent struggle is a martial art. “War without weapons,” some practitioners call it.

In martial arts, balance is crucial to victory. Renowned 17th-century Japanese warrior Miyamoto Musashi advised that, once an opponent becomes wobbly, “to follow up firmly on any loss of poise . . . to prevent him from recovering.”

Today’s antiracist movements must learn how to apply this principle in the fight against racism.

The current hysteria in the United States about the growing influence of antiracist ideas is a good sign in the struggle for racial progress. It suggests that last year’s uprisings for Black lives knocked America’s white supremacism off balance.

Every bill that attempts to ban Nikole Hannah-Jones’ 1619 Project from school curricula, every seminary statement repudiating critical race theory, every Tucker Carlson rant about the existential threat of ethnic studies programs is a desperate attempt to regain equilibrium for white cultural hegemony.

It’s tempting to see this backlash as a move from strength, but consider the conflict from the opponent’s view. If the custodians of the status quo saw themselves in a position of strength, they’d still be doing with critical race theory what they’ve been doing since the discipline emerged in the 1970s: ignoring it.

The Black Lives Matter movement has upended what theologian Walter Bruggemann calls the “royal consciousness” in the U.S. The royal consciousness is Bruggemann’s term for cultural hegemony: the worldview that pervades a nation, often shaped by things like “patriotic education,” mass media, state propaganda and civil religion.

It creates a culture of numbness that makes outrage about injustice unlikely and compassion for the oppressed nearly impossible.

Royal consciousness is on display when Americans take offense to the historical fact that the United States was founded as a white supremacist state and insist instead that America is the greatest democracy in the world.

In the early days of the Black Lives Matter movement, to repeat the lie that America can’t be a racist country because we’re just better than that seemed enough to counter the movement’s charges against white America.

America’s royal consciousness was so secure that most institutions, besides the police, could dismiss the Black Lives Matter uprisings before 2020. State legislatures didn’t feel the need to pass laws banning antiracist education. Corporations didn’t feel pressured to express support for the movement. Churches were largely silent. Not so today.

The gruesome murder of George Floyd by a smirking, sadistic police officer performed the prophetic task of disrupting the culture of numbness and denial about racial violence in the U.S. It summoned a world petrified with apathy to grieve the enduring global legacy of the transatlantic race war (better known as the slave trade).

Now that America’s royal consciousness is feeling wobbly, it’s more important than ever that the antiracist movement “follow up firmly” with more strategic, nonviolent struggle. If they ban the 1619 Project in schools, it provides opportunities for student walkouts and mass teach-ins. If legislators try to pass laws against antiracism education, they mark themselves to be primaried in the next election.

This is no time to lament that patrons of racism are fighting back against the gains of the Black Lives Matter movement. It’s time to strike a flailing racist hegemony before it fixes its stance.

Andre Henry is a writer, speaker and musician contending for a world without racism.