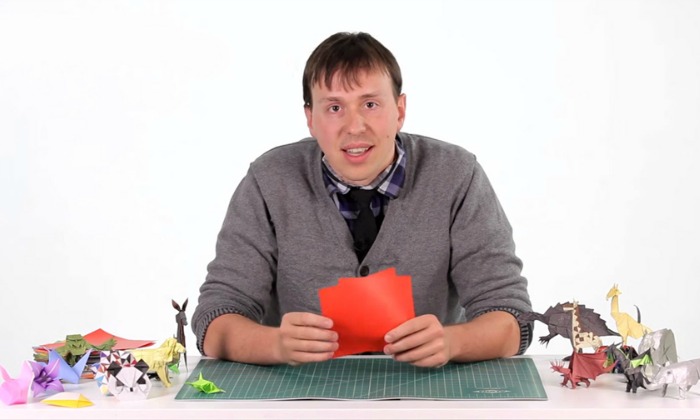 There are very few people in the world who are paid to fold origami, but 2005 Goshen (Indiana) College alumnus Ben Friesen, of Oakland, California, is one of them.

Friesen’s love for origami started at the age of five when he was growing up near Goshen and his mother gave him a dinosaur origami book. He taught himself the art, poring through how-to videos and origami books in Japanese, French and a handful of other languages. With patient repetition, Friesen mastered each fold and quickly learned the language of origami.

“It’s like learning an alphabet,” Friesen said. “You learn all those steps and put them together.”

During his time at Bethany Christian High School, Goshen, Indiana, and Goshen College, Friesen also discovered a passion for acting. He graduated from GC with a double major in theater and English and moved to Brooklyn, New York, to pursue a professional acting career.

But it wasn’t long before origami nudged its way back into Friesen’s life.

In need of a second source of income, Friesen decided to turn his longtime origami hobby into a side business called “Friesen Folding.” He taught origami lessons and sold his homemade creations via Etsy, an online marketplace for handmade or vintage items.

Two years later, Friesen heard about the opening of a new origami studio in Brooklyn. He showed up at the front door of Taro’s Origami Studio and said, “You should hire me.”

“I always said I’d never leave acting as a full-time job until I found something that I liked more,” Friesen

said. “Origami is probably the only thing next to acting that gives me that same rush.”

In 2011, Friesen chose to temporarily leave the theater, but believes that his theatrical background has been a significant factor in his success with origami.

“The irony of the theater degree is that it’s helped me a lot more than any other training I could have gotten at Goshen College for the job I have,” Friesen said. “The way that theater plays in is that I have to constantly sell myself.”

When he first started work at Taro’s, Friesen did voiceover work for the instructional videos and continually uses theater to engage with his students and clients.

Friesen works with students of all ages, and prefers to teach one-on-one. He teaches using Taro’s Origami Method, a program that maps out 30 kinds of folds, divided into six levels of difficulty. When students master a set of folds, they receive a colored bracelet to signify their achievement, much like the karate belt system in martial arts.

“We’re essentially trying to teach people how to fold anything, not just a specific model,” said Friesen.

In 2013, Friesen led the initiative to open an origami studio on the West Coast. His wife, Lindsay, had been accepted into the University of California, Berkeley, and Friesen needed to either quit his work at Taro’s or open a new branch.

Fortunately, the time was right for the expansion. Friesen relocated and began work as senior teacher and manager at Taro’s new studio in Oakland, California.

Although Friesen has relocated to Oakland, he is not limited by location and continues to receive clients from all over the country.

In addition to classes, Friesen uses his folding skills to create art for events, like birthday parties, bar mitzvahs and weddings. In Brooklyn, he had the opportunity to create exhibits for larger organizations, like The New York Public Library and the Central Park Conservatory. Following the devastation of Hurricane Sandy, Friesen worked with Ad Council on an advertisement that featured dollar bills folded into different origami shapes.

More recently, Friesen combined efforts with the Brooklyn studio to fold about 3,000 origami roses in three weeks. The roses were used in an ad campaign for LAIKA animation studios and Focus Features’ stop motion animation film, “Kubo and the Two Strings,” which will be in theaters August 19.

For Friesen, each project is different and an opportunity to learn something new.

“I feel fortunate,” Friesen said, “to have a job that I’m excited about every day.”