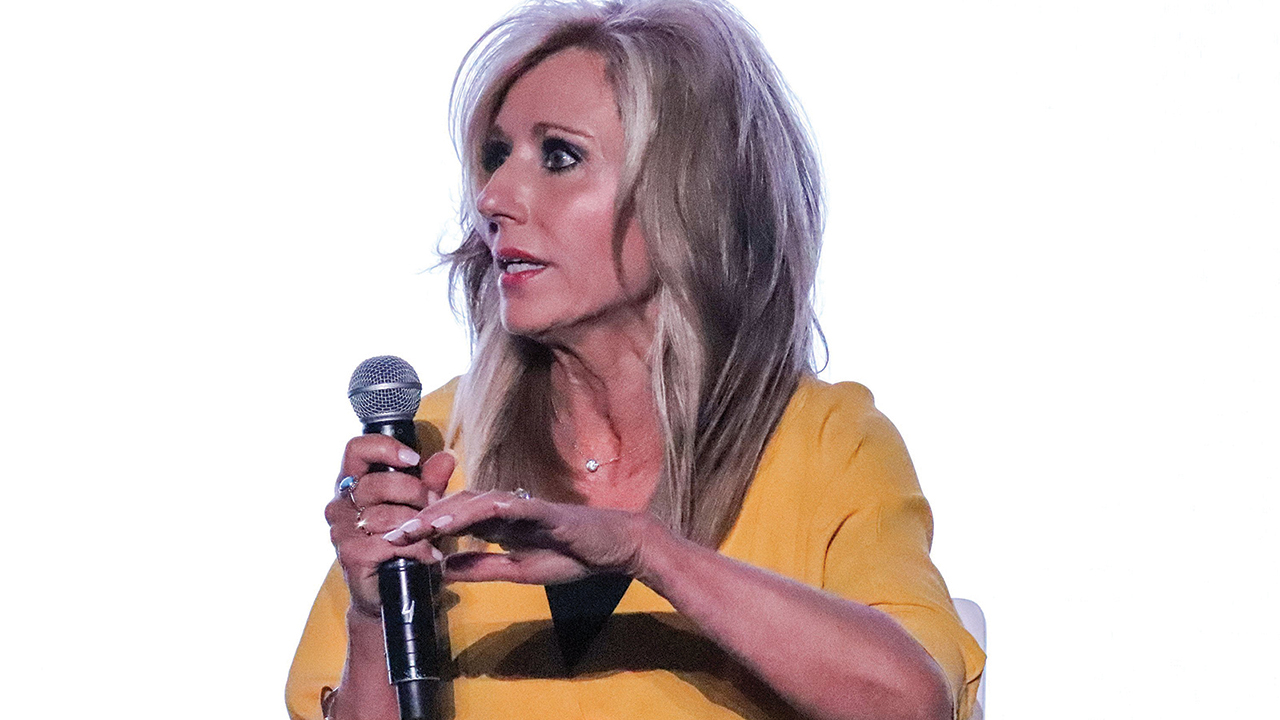 Beth Moore speaks during a panel on sexual abuse in the Southern Baptist Convention in Birmingham, Ala., on June 10, 2019. — Adelle M. Banks/RNS

For nearly three decades, Beth Moore has been the very model of a modern Southern Baptist.

She loves Jesus and the Bible and has dedicated her life to teaching others why they need both of them in their lives. Millions of evangelical Christian women have read her Bible studies and flocked to hear her speak at stadium-style events where Moore delves deeply into biblical passages.

Moore’s outsize influence and role in teaching the Bible have always made some evangelical power brokers uneasy, because of their belief only men should be allowed to preach.

But Moore was above reproach, supporting Southern Baptist teaching that limits the office of pastor to men alone and cheerleading for the missions and evangelistic work that the denomination holds dear.

Then along came Donald Trump.

Moore’s criticism of the 45th president’s abusive behavior toward women and her advocacy for sexual abuse victims turned her from a beloved icon to a pariah in the denomination she loved all her life.

“Wake up, Sleepers, to what women have dealt with all along in environments of gross entitlement & power,” Moore once wrote about Trump, riffing on a passage from Ephesians.

Because of her opposition to Trump and her outspokenness in confronting sexism and nationalism in the evangelical world, Moore has been labeled as “liberal” and “woke” and even as a heretic for daring to give a message during a Sunday morning church service.

Finally, Moore had had enough. She told Religion News Service on March 5 she is “no longer a Southern Baptist.”

Kate Bowler, a historian at Duke Divinity School who has studied evangelical women celebrities, said Moore’s departure is a significant loss for the Southern Baptist Convention.

Moore, she said, is one of the denomination’s few stand-alone women leaders, whose platform was based on her own “charisma, leadership and incredible work ethic” and not marriage to a famed pastor. (Moore’s husband is a plumber by trade.) She also appealed to a wide audience outside her denomination.

“Moore is a deeply trusted voice across the liberal-conservative divide,” Bowler said. “The Southern Baptists have lost a powerful champion in a time in which their public witness has already been significantly weakened.”

Moore may be one of the most unlikely celebrity Bible teachers in recent memory. In the 1980s, she began sharing devotionals during aerobics classes she taught at First Baptist Church in Houston. She began teaching a women’s Bible study at the church, eventually attracting thousands each week.

Her first published Bible study, A Woman’s Heart: God’s Dwelling Place, in 1995, was a hit, leading to dozens of additional studies.

From 2001 to 2016, Moore’s Living Proof Ministries ran six-figure surpluses, with assets of just under $15 million by 2016, according to reports filed with the Internal Revenue Service. Her work as a Bible teacher has permeated down to countless Bible study groups and sold-out stadiums with her Living Proof Live events.

For Moore, the Southern Baptist Convention was her family, her tribe, her heritage. Her Baptist church where she grew up in Arkadelphia, Ark., was a refuge from a troubled home where she experienced sexual abuse.

When Moore spoke out about Trump, the pushback was fierce. Book sales plummeted, as did ticket sales to her events. Her criticism of Trump was seen as an act of betrayal. From fiscal 2017 to fiscal 2019, Living Proof lost more than $1.8 million.

After allegations of abuse and misconduct began to surface among Southern Baptists in 2016, Moore also became increasingly concerned about her denomination’s tolerance for leaders who treated women with disrespect.

She also began to speak out about her own experience of abuse, especially after a February 2019 report from the Houston Chronicle, her hometown newspaper, detailed more than 700 cases of sexual abuse among Southern Baptists over a 20-year period.

Her social media feeds, especially Twitter, where she has nearly a million followers, became filled with righteous anger and dismay over what she saw as a toxic mix of misogyny, nationalism and partisan politics taking over the evangelical world.

Then, in May 2019, a friend and fellow writer, Vicki Courtney, mentioned on Twitter that she would be preaching in church on Mother’s Day, and Moore replied, “I’m doing Mother’s Day too!”

The tweet sparked a national debate among Southern Baptists and other evangelical leaders over whether women should be allowed to preach in church.

“There’s just something about the order of creation that means that God intends for the preaching voice to be a male voice,” Albert Mohler Jr., president of Southern Baptist Theological Seminary, said on his podcast.

Moore, who said she would not become pastor of a Southern Baptist church “to save my life,” watched in amazement as her tweet began to dominate the conversation in the denomination, drowning out the concerns about abuse.

“We were in the middle of the biggest sexual abuse scandal that has ever hit our denomination,” she said. “And suddenly, the most important thing to talk about was whether or not a woman could stand at the pulpit and give a message.”

When Moore attended the SBC’s annual meeting in June 2019 and spoke on a panel about abuse, she felt she was no longer welcome.

Things have only gotten worse since then, said Moore. The SBC has been roiled by debates over critical race theory, causing a number of high-profile Black pastors to leave the denomination. Politics and Christian nationalism have crowded out the gospel, she said.

Anthea Butler, associate professor at the University of Pennsylvania and author of a forthcoming book on evangelicals and racism, said Moore could become a more conservative version of the late Rachel Held Evans, who rallied progressive Christians tired of evangelicalism but not of Christian­ity.

Butler believes Moore will be better off leaving the SBC, despite the pain of breaking away.

“I applaud this move and support her because I know how soul-crushing the SBC is for women,” Butler said.

“At the end of the day, there comes a time when you have to say, this is not who I am,” she said.