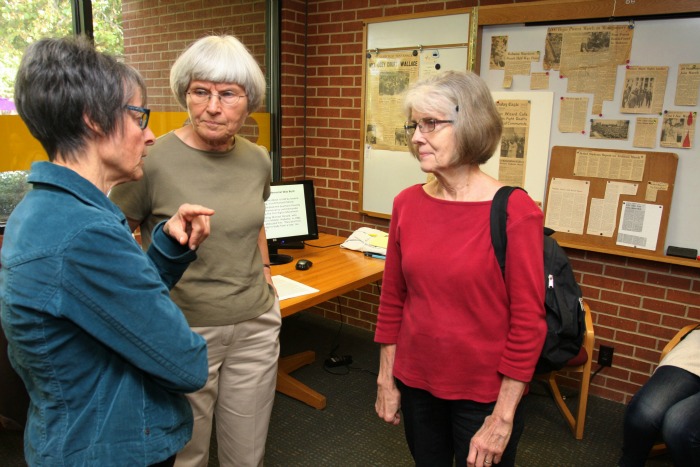 Photo: Valetta Seymour, left, talks with Betty Reimer Wyckoff and Marianne Krahn Miller at a special reunion remembering the group from Bethel who joined a march in Montgomery, Alabama, calling for passage of the Voting Rights Act in March 1965. Wyckoff and Miller were both students who were part of the group. The reunion was held during Bethel College’s 2015 Fall Festival, Oct. 10 on campus (photo by Vada Snider).

A small group of people gathered at Bethel (North Newton, Kan.) College Oct. 10 to remember being part of a large day in history more than 50 years ago.

The event they were recalling was the 50-mile march from Selma to Montgomery, Alabama, under the leadership of Martin Luther King, Jr. and the Southern Christian Leadership Conference (SCLC), for the purpose of pushing the passage of the Voting Rights Act.

The march started March 21, 1965, with the ever-swelling crowd walking into Montgomery on March 25.

It followed “Bloody Sunday,” the first attempt on March 7, in which police and others attacked the unarmed marchers with tear gas and billy clubs, and a second aborted march on March 9, when state troopers stood aside to let the group pass, but King decided to turn back.

In 1965, Dwight Platt, professor emeritus of biology, was a young college teacher. So was his brother-in-law, Omer Galle, who after a year teaching sociology at Bethel, 1963-64, had moved on to another position at Vanderbilt University in Nashville, Tennessee.

Platt called Galle to tell him that there were about 25 people from Bethel who wanted to take part in the march. Platt was hoping to join with a group from Nashville in order to avoid taking cars with far out-of-state license plates into Alabama (a fear he noted was confirmed by the murder of Viola Liuzzo the night of March 25 by members of the Ku Klux Klan).

Fifty years later, Platt contacted as many of the Bethel marchers as he could find e-mail addresses for, asking them to share memories of the time.

Eventually from that came the idea of having a marchers’ reunion during Fall Festival. Betty (Reimer) Wyckoff, a 1968 Bethel graduate now living in Overland Park, agreed to organize the reunion, with Platt’s assistance.

The come-and-go event took place over four hours during Fall Festival. There were newspaper clippings, a few slides on computer and copies of the compiled recollections for people to peruse, a soundtrack of music from the March 25 rally outside the Alabama state capitol building, and time to greet and catch up with folks you might not have seen for years or even decades.

In March 1965, the Bethel group drove their cars to Nashville and then boarded buses to travel to Montgomery, where they would join in the last day of the march. Galle decided to go with them.

Platt and his wife, LaVonne, and their infant son, Richard, had been part of the March on Washington for Jobs and Freedom in the summer of 1963. But Platt credits his mother, Selma Platt Johnson, with being the motivating force behind his lifelong interest in civil rights.

Already in 1945, Johnson had helped organize the Newton Interracial Fellowship. When she took her children to the movies, they sat in the section reserved for “Colored,” and Platt was later part of the effort to integrate Newton’s public swimming pool.

Platt’s speaking at Bethel about his beliefs and experiences, as well as the literature that attracted college students in the 1960s – for example, writings by James Baldwin, John Howard Griffin and King himself – were some of what motivated the students who decided to join the march.

Richard Littlebear, Lame Deer, Montana, for example, was initially attracted to the idea of going on the march in the hopes of meeting James Baldwin. He did get to shake the famous author’s hand.

“The cause of civil rights pervaded Bethel,” recalls Clayton Koppes, Cleveland, Ohio. “At the opening convocation in my freshman year, Dwight Platt gave a moving account of participating in the March on Washington in 1963, famous for Martin Luther King Jr.’s ‘I Have a Dream’ speech. In Phyllis Bixler’s English composition class, we read King’s Letter From Birmingham Jail.

“When C.T. Vivian of the [SCLC] spoke at Bethel, I interviewed him for The Collegian as a rapt group of students sat in a circle. Vincent Harding conducted a very powerful workshop on civil rights at Camp Mennoscah one summer.”

Koppes says that when the word started getting around on campus that a contingent would go from Bethel to Montgomery, “it seemed instantly obvious that this was the thing to do. Civil rights was the great issue of our time. Discrimination against African Americans was an endemic injustice, but hope [in the form of] federal legislation was in the air.

“As Northern college students, we felt helpless and distant, but here was a moment where our presence could move history forward. Going to Montgomery was what Kierkegaard termed a ‘free act.’ We had to seize this opportunity.”

Bill Juhnke, Lamoni, Iowa, remembers the call from King “for all Americans, black and white, to join the [SCLC] and Student Nonviolent Coordinating Committee in Montgomery” as coming through Bethel’s religious life program.

“Our campus minister, just before we left, gave us three reasons to join the demonstration. First was to identify with black Americans – they needed to know that they were not alone, their plight was our plight, too. As fellow Christians and citizens, we needed to walk in solidarity with our brothers and sisters.

“Second, we needed to nurture our faith commitments by learning more about the evil of racism in the world, at the same time as we showed the courage of our convictions. It was easy to talk the social gospel – now was the time to walk the walk.

“And third, we needed to go to Montgomery to witness to the oppressor, Southern whites, to let them know that fundamental unfairness – in this case, denial of the vote on the basis of race – would no longer be tolerated by disengaged Christians and white Americans. Good reasons, I thought.”

The marchers also took time to think about what had changed – or not – in 50 years.

“[The march] was an overwhelming experience,” Platt says. “At the time, one could only hope change might come. We could only hope laws might change. We could not envision many of the changes that have occurred in both North and South, as much of the legal and institutional support for discrimination has been torn down.

“In another sense, we were naïve in imagining this would finally solve the problem. Cultural attitudes have been more resistant to change. Recent events have demonstrated that racist attitudes still exist and find expression in other more subtle forms of discrimination – economic relations, incarceration and so on.”

“I could not have imagined that 50 years later, the United States would have a two-term black president, that African Americans would attain the cultural and celebrity prominence they have,” Koppes says, “or that issues of race would still sear American life.

“Fifty years later, the shootings of black men in Ferguson, New York and Cleveland remind us of the unfulfilled promise of the dream for which we marched in Montgomery. I had little sense of the intractability of racism.”

Galle points out that, “sadly, there’s still strong sentiment toward voter suppression in laws being introduced and passed in several of the state legislatures in our nation today. The words are different, and the alleged ‘target’ of the suppression is different, but it seems to me the aim of the suppression is fundamentally the same – that is, to keep those who are in power in those same positions of power.”

However, he added, “We remain committed to the struggle for equality in this nation and throughout the world.”