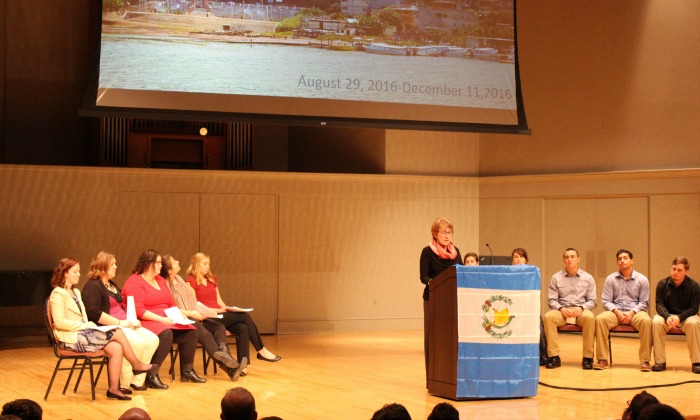 Eleven students spent the fall 2016 semester in Guatemala. The group lived for the first nine weeks in Guatemala City, taking Spanish and Latin American history classes at Central America Study and Service (CASAS) which is affiliated with the Guatemalan Mennonite Church.

Michelle Miller, a junior from Dundee, Ohio, described Guatemala as a “rich and diverse culture” featuring breathtaking landscapes including volcanoes and cloud forests and cities and villages “filled with the promise of potential.” However, she explained that there also is no escaping that Guatemala is a land filled with poverty and violence.

Weekend excursions highlighted the dual nature of the country. Students went to places ranging from the Mayan ruins, beaches and volcanoes to the national cemetery and the city dump.

“The dump was such an eye-opening experience. You could smell it from the starting point of the cemetery. We stood on a cliff looking down into the dump and you could just see the little huts where people lived. You could see the different levels of the dump where all the landslides have happened. In the distance you could see a small fire and you could see the people all standing around the dump trucks to try and get anything they could fine, including leftover food and clothing,” said Abbigale McCormick, a sophomore from Maumee, Ohio.

The students lived with host families who introduced them to everyday life in Guatemala. Many of the students played soccer with their host families, practiced their new Spanish skills with them and kept up with life in America by watching news about the presidential elections with them.

“It was very difficult to say goodbye to them and I hope to see them again in the future. I loved being a part of their family, and I miss them tremendously,” said Morganne Faler, a sophomore from Huntsville, Ohio.

During the final month, the students were placed in separate community learning field assignments. The students were matched with organizations that reflected their majors and interests. The volunteer placements ranged from medical outreach to shelters for battered women.

For part of her field assignment, McCormick worked in a daycare.

“There was a little girl who was attached at my hip and would get so upset when I had to leave. She did not seem to talk much and when she did it was like a very quiet mumble. I could not figure out why she liked me so much until I was told her story,” explained McCormick. “Her mom died when she was little. Now she was being raised with her two brothers by an alcoholic father. I was one of the only stable women figures she had in her life.”

The participants returned to the United States shortly before Christmas. This was the third group of Bluffton students to take part in a semester in Guatemala.

During the program, run by Eastern Mennonite University, participants live with other students from EMU and Regis University in a working-class, largely African-American neighborhood in D.C.

“Being in D.C. was not only a way to gain professional experience but to allow me to come back a better person. I became more open minded,” said Clay. “Living with people with differing viewpoints was kind of challenging at first, but it opened my eyes to what others in the world see, and I either formed new opinions or affirmed the ones I already had.

Two students studied in Spain this summer through Brethren Colleges Abroad. Katelynn Driggers, a senior from Carey, Ohio, ventured to Barcelona and Laura Galley, junior from Cumberland, Ind., lived in Valladolid. Galley had originally planned to study in India. That trip was canceled, but she was given the opportunity to go to Spain.

“I was terrified. I had only taken three years of high school Spanish, and I had hated every second of it because it was such a difficult subject for me to learn. But I decided to take a chance and go to Spain anyway, and it ended up being the best summer of my life,” said Galley. “I encourage you to go out there, take chances and do things out of your comfort zone. You’ll never know what you can accomplish if you don’t try.”