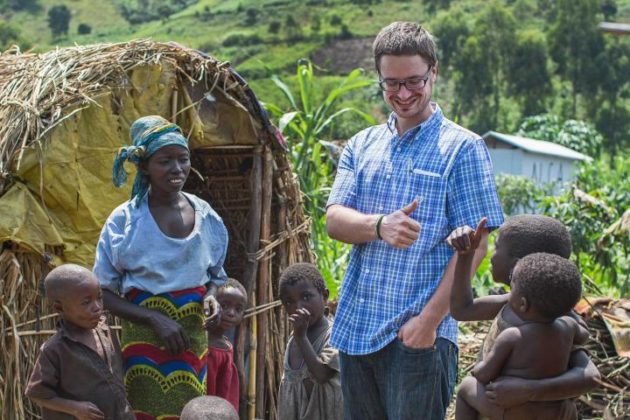 Photo: Michael J. (MJ) Sharp visits with Elizabeth Namavu and children in Mubimbi Camp, one of the camps for displaced people in eastern Congo. Photo by MCC/Jana Asenbrennerova.

Michael (M.J.) Sharp, a United Nations worker and one of six individuals kidnapped near Bunkonde in the Kasai region of the Democratic Republic of Congo, was found dead on Monday March 27.

On March 28, Cogolese spokesman Lambert Mende confirmed to multiple media outlets that the bodies were those of Sharp, fellow UN worker Zaida Catalan of Sweden and a Congolese interpreter (who Mende did not name). In a March 28 e-mail, John Sharp, Michael’s father, also confirmed that MJ’s body had been identified.

“It’s now a certainty. It is the two investigators. We identified the third body in the grave with them as their Congolese interpreter,” said Mende.

Update March 29, 8:00 a.m.: On Tuesday evening March 28, UN Secretary General António Guterres issued a statement confirming that the bodies, found my members of the UN mission on March 27, were identified as Catalan and Sharp.

“I convey my profound condolences to Michael’s and Zaida’s families, loved ones and colleagues,” said Guterres. “Michael and Zaida lost their lives seeking to understand the causes of conflict and insecurity in the DRC in order to help bring peace to the country and its people. We will honor their memory by continuing to support the invaluable work of the Group of Experts and the whole UN family in the DRC.”

Gutteres said a more thorough examination will take place to determine the cause of death alongside a UN inquiry into the deaths and kidnapping. “I trust that the Congolese authorities will conduct a full investigation into this incident,” he said.

On March 27, John Sharp, Michael’s father, posted the following note on Facebook: “We have been informed that two Caucasian bodies have been found in shallow graves in the search area, one male and one female. Since no other Caucasians have been reported missing in that region, there is a high probability that these are the bodies of MJ and Zaida. Dental records and DNA samples will be used to confirm the identities. This will take some time.”

Earlier today, Mende told Top Congo FM that three bodies, two Caucasion and one Congolese, were found on Monday, but he did not confirm their identities.

On March 12, Sharp was kidnapped along with Catalan, Betu Tshintela, an interpreter, driver Isaac

Kabuayi and two unnamed motorbike drivers. Sharp and Catalan were part of a UN panel of experts that was investigating ongoing conflicts in the region.

Sharp, 34, is a 2001 graduate of Bethany Christian Schools in Goshen, Indiana, and a 2005 graduate of Eastern Mennonite University, Harrisonburg, Virginia. He has been serving with the UN since 2015. Prior to that, he served with Mennonite Central Committee (MCC) as the Eastern Congo Coordinator. Most recently, Sharp had been attending Albuquerque (N.M.) Mennonite Church.

“We are extremely worried about the missing UN team. The Congolese government should cooperate fully with the UN and other international investigators to do all they can to bring the team back safely,” said Ida Sawyer, Central Africa director at Human Rights Watch.

Over the weekend, escalating violence was reported in the Kasai region. There were reports of the beheading of 42 police officers who were tasked with fighting a local militia group, Kamuina Nsapu. The Washington Post reports that Kamuina Nsapu is also suspected in the kidnappings.

The unrest in the Kasai region has been growing as DRC President Joseph Kabila has refused to institute elections, according to Africa Times. Violence in the region has escalated since August 2016, when government forces killed Jean-Pierre Mpandi, a vocal critic of Kabila. In a March 22 statement, the United Nations Office of the High Commissioner for Human Rights stated that investigators had visited two mass graves. Some of the bodies were reportedly of those killed by the Congolese military.

To date, UN officials have not issued a statement regarding the discovery of the three bodies or their identities.