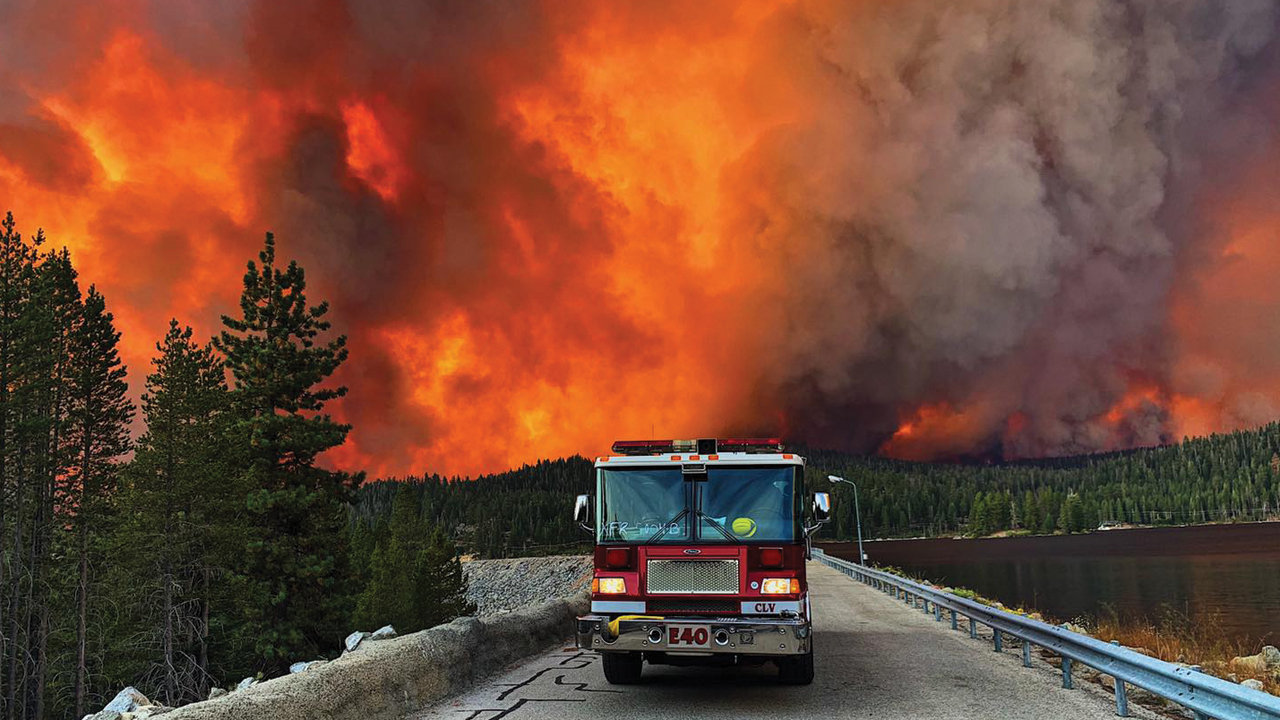 Firefighters prevented California wildfires from damaging Camp Keola, a facility owned by Pacific Southwest Mennonite Conference on Huntington Lake in Fresno County, but a retreat center owned by Fresno Pacific University not far away was not so lucky.

Recently retired conference minister Clare Ann Ruth-Heffelbower said firefighters initiated “backburns” the weekend of Sept. 6. These were thought to have saved the camp and other structures from the Creek Fire, which burned more than 212,000 acres and destroyed more than 300 homes and other buildings since it began Sept. 4. But a few days later uncertainty returned when it was learned that fires came back and traveled around both sides of the lake on which the camp sits.

The camp was already devoid of campers due to COVID-19, before evacuation orders removed anyone renting cabins.

“A lot of people are really concerned about the camp,” she said Sept. 9. “If you look on the Camp Keola Facebook pages, there are people praying. I’ve heard a lot of young adults say Camp Keola made me who I am.”

Official confirmation was received that the camp was saved after the Huntington Lake Volunteer Fire Department surveyed the area Sept. 12.

Much of California has been especially prone to wildfires due to a drought that has persisted for about five years.

“The trees became susceptible to bark beetle, and lots have just been sitting there dead,” Ruth-Heffelbower said. “In addition to that, the forest service did some logging to help the depressed logging industry, and that made things burn quicker because there’s more stuff on the ground they just left behind, along with the high temperatures and winds.”

While the camp was spared, a three-story cabin owned by FPU about 15 miles from camp in the Shaver Lake area burned down to its foundation the weekend of Sept. 5. The Casa Pacifica retreat facility hosted students, staff and faculty.

Dalton Reimer wrote in a history of Casa Pacifica that the original structure was built about 1959 in Kings Canyon National Park and sold at auction by the National Park Service as part of efforts to return a section of the park to its natural state. Reimer and fellow faculty Don Isaac and Dennis Langhofer came together and bid $1,057 for the building, narrowly beating out other bids. Since college funds were not available, Reimer and his wife, Beverly, provided the funds and eventually transferred the assets over time.

The two-and-a-half-story structure expanded to three stories when construction began in 1980 on a five-acre parcel of land near Shaver Lake purchased for $21,000. By 1984, the cabin could sleep 24 in beds and bunks, plus sleeping lofts. FPU took ownership in 1998. It served as a weekend retreat facility during the academic year, and vacation lodging in summers.

“Casa held a special place in the hearts of the FPU community, including countless alumni,” said FPU President Joseph Jones.

Scheduling grew to such an extent the cabin was reserved up to three years in advance, with faculty staff and families given priority in scheduling.

Up the coast in Oregon, Drift Creek Camp near Lincoln City found itself in an evacuation zone when the Echo Fire worked its way south. Caretakers Josh and Anna McLaren, along with their children, cut their way through fallen trees out of the camp Sept. 8 during the brief window when Highway 18 was open for people to leave Lincoln City. Even with people from town also clearing a path toward the camp, the process took hours, while the Echo Fire grew.

By the following weekend, winds diminished and the fire appeared to stabilize. Staff returned to Drift Creek to clear the road to camp, and camp co-director Brenda Hostetler Kauffman confirmed Sept. 13 on social media it was spared.

“We haven’t heard of anyone losing their homes as of yet in our congregations, but damage assessment is ongoing,” she said. “The big news from Oregon is the horrible air. We’ve been in the hazardous range now for several days and are praying for rain.”

First Mennonite Church in McMinn­ville faced a similar situation and took in six families from the congregation who had to evacuate their homes when the fires were at their peak.

Pacific District Conference of the U.S. Conference of Mennonite Brethren Churches confirmed none of its 120 congregations in California, Oregon, Washington, Arizona, Nevada and Utah were in danger.