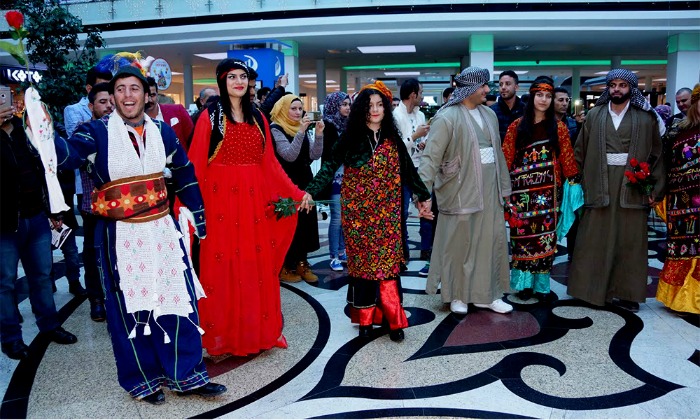 Photo: Youth wearing traditional dress dance in Iraq in February 2017 as part of a community event celebrating cultural and faith differences. The event was just one of many culminating projects that resulted from youth peacebuilding and leadership trainings, funded by United Nations Development Programme and faciliated by the Iraqi al-Amani Association and Eastern Mennonite University’s Center for Justice and Peacebuilding. Five CJP alumni have contributed. (Photo courtesy of the Iraqi al-Amani Association)

In an Iraqi mall on Valentine’s Day, shoppers were treated to a unique sight. Twenty-eight young people wearing traditional dress from the many cultures in the country congregated to sing, dance and hand out flowers and balloons with messages promoting love and co-existence.

The event, one of 42 created and implemented by youth across Iraq, was to promote peaceful coexistence and tolerance among Iraqi communities struggling through a divisive political climate.

The project brings together Eastern Mennonite University’s Center for Justice and Peacebuilding in Harrisonburg, Virginia, and the Iraqi al-Amal Association in a multi-phase project that focuses on youth and academics to build a culture of peace in the country.

As key stakeholders in Iraqi social fabric, youth and academics are “seen as instrumental in strengthening social cohesion and promoting civil society initiatives and dialogue between various ethnic and religious groups,” according to the project grant, which is funded by the United Nations Development Programme (UNDP).

Nassif, Mangoush and Tarik designed workshops on conflict resolution in Arabic for both youths and academics. Jadallah provided the first training for youth in October 2016, followed by two others for youth and three for academics from Iraqi universities. While the academic trainings will lead to a peace building curricula that would be shared by universities across Iraq, the youth trainings culminated in a series of community peacebuilding project proposals.

Mangoush appreciated the opportunity to work together with CJP alumni on one project, “practicing our beliefs and skills as peacebuilders from different Arabic countries to assist peace in Iraq.” An important aspect of the project, she adds, is “acknowledging the need to promote peace from a local perspective and through religious tolerance.”

More than 563 youth from Najaf, Nineveh and Baghdad applied to participate in the trainings. Seventy-two were selected, with criteria including age, potential, experience, connections, responsibility, diversity and vision.

Muntather Hassan, youth program coordinator for the Iraqi al-Amal Association, has attended each training, worked with youth on their proposals and watched selected projects come to fruition.

A Facebook page provides a space for artwork created on the theme of peace. Five artists started this project, and they’ve been joined by 50 others. Besides the Valentine’s Day project, other funded projects include visitation programs in Erbil, where Muslim activists visited internally displaced Christian children in Erbil, and in Baghdad, where both Christian and Muslim activists visited Muslim children.

Though Iraq is full of problems, Hassan says young people see a chance to make a difference and to address issues “the older generation can’t see.” They are motivated, he said, by the desire to live a normal life without fear, “ordinary needs that give them motivation.”

“A journey like this comes once a life,” wrote one participant. Another shared that he felt “loved, respected, supported and listened to.” Yet another learned that “not all Muslims are ISIS.”

“Mohammed came back from Erbil as a different person, a better one,” said one participant’s parents.