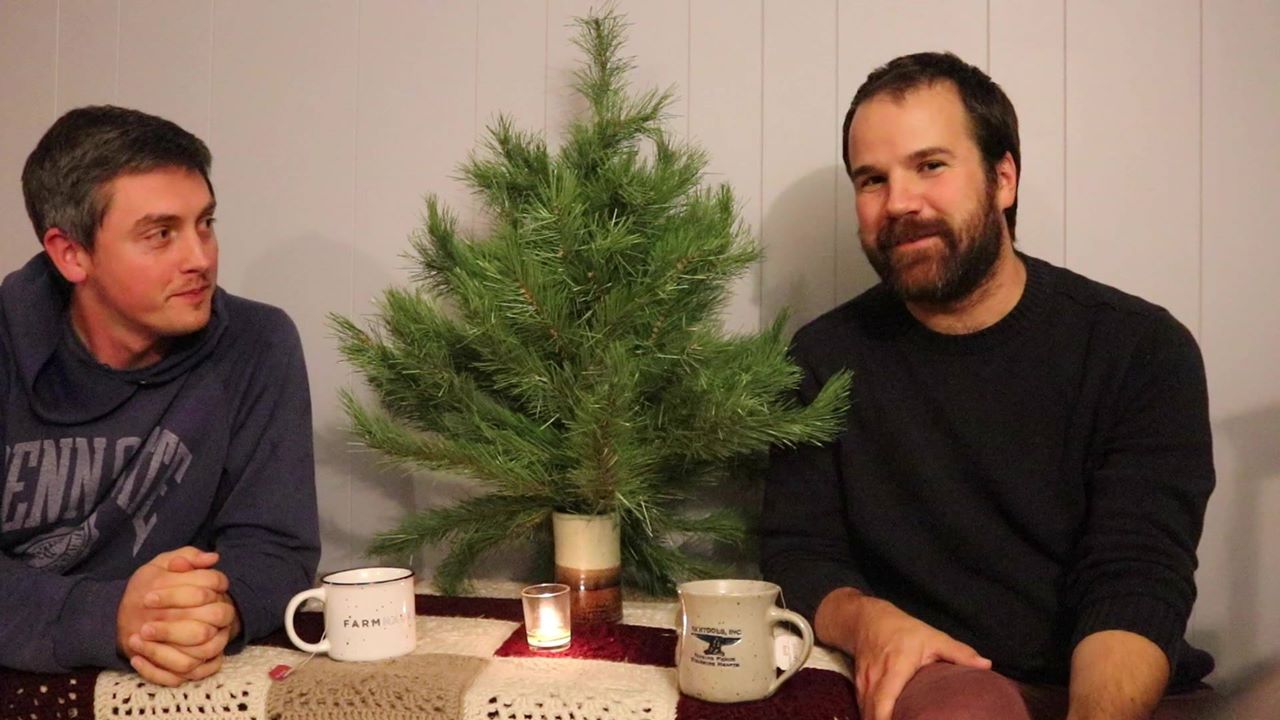 Seth Thomas Crissman and Greg Yoder are members of The Walking Roots band. They live and work in Harrisonburg, Virginia. They just released “Hark: A Walking Roots Band Christmas.”

Here they list their top 10 favorite Christmas songs (five from Seth and five from Greg).

You can also listen to their full playlist below.

1. Sufjan Stevens, “Friendly Beasts”: Sufjan’s collection of Christmas-y songs is massive. There are lots of good ones in there, including his own take on “Lo, How a Rose.” I like the choices he made on “Friendly Beasts.” You can feel the chaos grows as the song grows. Through instrumental/vocal devices, he seems to want to take us to the stable. I’m not sure whether or not he was making a statement about how that night likely wasn’t very silent. Regardless, it’s a favorite.

2. Charlie Brown’s “What Child is this?” and “Greensleeves”: Growing up in the Laurel Highlands of western Pennsylvania, my parents wouldn’t let us watch anything but Christmas movies from the first Sunday of Advent until New Years. Some were top shelf cinema, and others would be better left in the past. Charlie Brown Christmas is so iconic. It’s such a spectacular soundtrack. I love it when Linus tells the Christmas story. Later in life, my brother, Jonathan (who is now a classical guitar professor), and I would often perform Renaissance carols at Christmas time. He would play lute and I’d play recorder. This song, and this recording of it, take me home.

3. The Walking Roots Band, “Jesus Christ the Apple Tree”: I feel a little weird putting one of our songs from The Walking Roots Band on this list, but this is one of my all-time favorite Christmas songs now since we wrote a new tune/melody for it. The lyrics are from the early 18th century, and it is usually sung in a beautiful choral setting that we all love. As we looked at the lyrics about being weary and worn down, we decided go in a very different direction musically. I think where we ended up fits, and Jackson’s (Maust) voice has such a genuine feel. I believe the conviction in his voice. “This fruit doth make my soul to thrive, it keeps my dying faith alive.” This traditional carol can meet those of us who need to be fed and sheltered.

If we know and love this Jesus who is born at Christmas, we dare not categorically ignore, legislatively oppress and shut the door on those whom Jesus loves. Let’s talk about this stuff. Let’s lament, confess and repent, for the Kingdom of Heaven has come near.

1. The Oxford Trinity Choir, “Once in Royal David’s City “:  As a music student at Goshen (Indiana) College, a big part of the end of the fall semester was the “Festival of Carols,” a huge production involving all the choirs, orchestra, organ, tons of poinsettias and hours of rehearsal. GC’s “Festival of Carols” is patterned after the Festival of Lessons and Carols performed by The Oxford Trinity Choir. Every year the Festival starts in the same way: one lone voice begins to sing out of the darkness with the purest tones. “Once in royal David’s city…” The build through the following verses with the addition of other voices and orchestra is the build of the Christmas celebration. Sure, it might get a little loud and over the top at some points, but it is sheer exuberance, and it begins with the voice of a child telling an old, old story.

2. Gian Carlo Menotti, “Emily, Emily”: When picking five tracks for a Christmas playlist, you can’t really pick “Amahl and the Night Visitors” as one track, but that’s really what this selection represents. The old 33 record of Gian Carlo Menotti’s Christmas/Epiphany operetta spun countless times each year in the Yoder household throughout my growing up years. My younger brother absolutely rocked the role of Amahl for a number of years in a local production, and I got to be part of the chorus of shepherds during one of his last years playing the part. The whole story, as Menotti spins it out in “Amahl,” is well worth many listens, but the scene with the shepherds calling to one another is one of my favorites. The joviality and camaraderie of these friends and their excitement at the arrival of the kings and the news of the baby is so much fun to hear, and if you know anyone named Emily, you can’t help but burst into song whenever you see them at this time of year: “Emily, Emily, Michael, Bartholomew, how are your children, and how are your sheep?”

3. Charles Gonoud and J.S. Bach, performed by Yo-Yo Ma and Bobby McFerrin, “Ave Maria”: I’ll admit, I am spoiled. My younger brother is a professional cellist, and through him I’ve been exposed to much more solo cello and chamber music than many people would seek out for themselves. The cello is a very human instrument; it has roughly the same range as the human voice (if you were the sort of super-human who could sing bass, soprano and everything in between). As such, it sounds to my ears like an Incarnation instrument. I experience God very intimately through music, and the wood and strings of a cello set in motion by a player attuned to the divine in his or her craft is quite simply sublime. This track is a toss-up between the Bach-Gonoud “Ave Maria” and Bach’s “Prelude in G,” so listen to them both. My brother and I performed this “Ave Maria” many times, but I love this version with Bobby McFerrin doing the piano accompaniment with his voice. The tension builds throughout the piece, and the release is revelatory. It is Mary’s humble and unassuming faithfulness that makes a way for God’s entrance into our lives in the person of Jesus. Ave Maria!

4. Alison Krauss, Yo-Yo Ma, Natalie MacMaster, “The Wexford Carol”: There was a family of musicians at my home church who often led the singing at our Christmas Eve service, and I think it was one of those services when they first introduced us to “The Wexford Carol.” A traditional Irish carol, it’s got that haunting modality (Mixolydian, in this case, if you were wondering) that sets the scene so well to tell a story. This arrangement is just beautiful, with Alison Krauss’s otherworldly voice, the cello and the bagpipes propelling the story on until at last we are face-to-face with the Messiah.

5. Emmylou Harris, “There’s a Light”: For me, Emmylou Harris’s voice is the voice of Christmas. I owe a debt of gratitude to my father for sharing his love of music with me and exposing me to musicians and writers of great depth. The whole album (Light of the Stable) is well worth listening to, but this song is the best one.

Listen to Seth and Greg’s playlist: