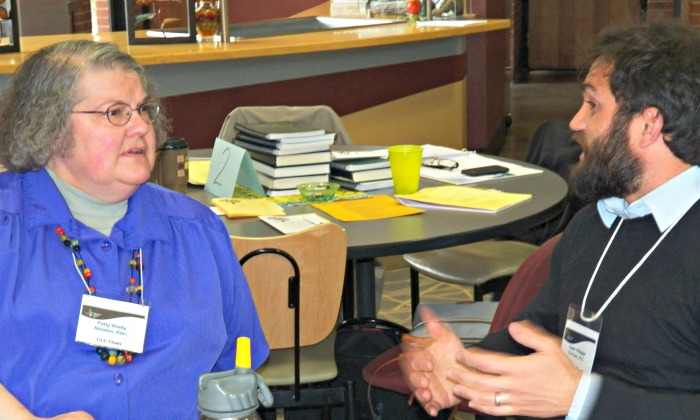 In its final meeting before the delegate assembly in Kansas City, Mo., the Constituency Leaders Council (CLC) recommended to the Executive Board (EB) of Mennonite Church USA a resolution calling for “all those in MC USA to offer grace, love and forbearance toward conferences, congregations and pastors in our body who, in different ways, seek to be faithful to our Lord Jesus Christ on matters related to same-sex covenanted unions.”

While CLC makes recommendations about resolutions, EB decides which resolutions to bring to delegates.

The other LGBT-related resolutions were the Lower Deer Creek Resolution, brought by an Iowa congregation and others, and the Becoming a Just Church Resolution, sponsored by seven congregations.

Lower Deer Creek calls for “sanctions or termination of membership” for conferences “who have acted contrary to our Confession of Faith as it relates to performing covenanted same-sex ceremonies or credentialing persons living in same-sex relationship.”

Just Church calls for “amend[ing] all church documents as needed to support full inclusion of LGBTQ people in the life and ministry of the denomination at all levels of participation and service.”

Sexuality resolutions: Isaac Villegas, chair of that committee, told CLC members that the three resolutions represented “the range of different views present in the church” and asked that CLC choose one to recommend to EB.

“We do not believe that God is leading us in three directions,” Villegas said.

At the March 26-28 meeting in North Newton, Kan., CLC members discussed the resolutions in table groups, then reported their responses.

Elroy Miller of Virginia Conference asked if the language could be changed.

Michael Zehr of Southeast Conference reported from his table that while the Deer Creek resolution reflected their theology, it was “too prescriptive and lacked grace and humility.”

Shannon Dycus of Indiana-Michigan Conference said her table was drawn to the Chicago/Reba resolution but imagined adding a statement to the Confession of Faith that identified the different ways we interpret it, for example, “We choose to live with different interpretations and affirm marriage, traditionally between a man and a woman.”

Keith Weaver of Lancaster Conference said that while LMC may only accept the Deer Creek resolution he believed they could go with the Chicago/Reba resolution. “I have a dream that we can make space for each other and respect each other,” he said.

In the end, most felt the Chicago/Reba resolution had the best chance of passing, though several tables wanted a mention of the Confession of Faith attached to it.

The group endorsed three resolutions, on sexual abuse, Israel/Palestine and endless warfare. When asked to prioritize them, CLC members unanimously affirmed the one on sexual abuse and were less than unanimous on the other two.

The EB will consider all these at its meeting April 6-8 in Kansas City, Mo., and decide what to present to delegates.

Much of the first day of CLC, which includes about 70 representatives from Mennonite Church USA conferences, constituency groups and agencies, was devoted to presentations by Ruth Haley Barton on discernment. She said that two-thirds of discernment is preparation, which involves spiritual transformation.

Executive director’s report: In his report to CLC, Ervin Stutzman noted that “area conferences look to the denominational structures primarily for resources and support, not for governing authority.”

He illustrated this with the examples of Central District Conference and Lancaster Conference, who respond differently to the Membership Guidelines. Each responds out of their DNA and illustrate the principle that “culture trumps structure and relationships.”

The most important question we face as a church, he said, is, “How will the culture of Mennonite Church USA provide a comfortable home for area conferences with different cultures and polities?”

By the end of the meeting, many CLC members spoke of the goodness of meeting together.

Karen Sensenig said she was eager to go back to LMC and say how people can come together, even with different perspectives.

Gary Wolfer of South Central Conference said our culture tells us our own opinions are correct and others are dumb, but he was blessed to hear different perspectives and to be heard.