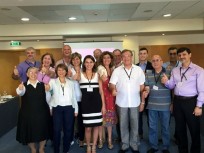 “Always remember the grace of God that is sent upon you.”

This phrase, quoting the Qur’an, appears on the center of a simple lapel button. The buttons were given to participants at the first-ever Interfaith Lebanese Eldercare Conference, Sept. 5-6 in Larnaca, Cyprus, as a token of appreciation from the chief executive of a large Lebanese health system.

The purpose of the conference was to consider possibilities for collaboration among Lebanese leaders in service to older adults. The gathering was held in Cyprus because of safety concerns in Beirut, Lebanon.

The conference was inspired by the unique collaboration forged by Joyce Eid, executive director of Moadieh Evangelical Center, and David Reimer, CEO of Palm Village, a member organization of Mennonite Health Services Alliance. Moadieh Evangelical Center is a relatively new faith-based assisted-living program in Beirut. Palm Village, a retirement community in Reedley, California, was founded with the support of the Mennonite Brethren Church over 70 years ago.

When asked about Palm Village’s interests in the Lebanese center, Reimer explained, “Our mission statement states that we are to serve senior adults. It makes no mention of a street address or region. As a result, when we find opportunity, we evaluate it on its merit, not its location. We have been privileged to have been introduced to service organizations on different continents by Mennonite Central Committee.”

Together Reimer and Eid laid the groundwork and raised the money to gather Lebanese leaders from across the faith spectrum.

Conference speakers included Dr. Majd Alawan, technology specialist with LeadingAge, who spoke about new applications of technology in care delivery. Dr. Paul Norwood, an endocrinologist from Fresno, California, shared about the correlation of depression and diabetes in older adults, and Dr. Rick Stiffney, president and CEO of MHS, facilitated the exploration of new possibilities for the group.

Eid led a wrap-up session to lay groundwork for next steps. The group plans to meet again soon to create an action plan for collaboration that may significantly shape standards of care for senior services in Lebanon.

“War made us learn the hard way that we cannot live without each other. Lebanon is unique in its religious diversity, and we plan to nurture [that diversity] now,” Eid said.

Reimer added, “In a region that is known for fear, sometimes violence and at best indifference between factions, it was great to see enthusiastic affirmation across confessional lines. They celebrated what they had in common: they were Lebanese, they were committed to eldercare and they wanted to work together.”

Stiffney, too, spoke highly of the courage and convictions of the participating Lebanese leaders.

“They were able to name and claim their common sense of a ‘sacred’ call to serving older adults with love, compassion, and dignity. They recognized that through extending trust they could begin to build friendships through which they could advance common interests in policy and resource development,” Stiffney said. “It was an honor to serve and learn with them.”