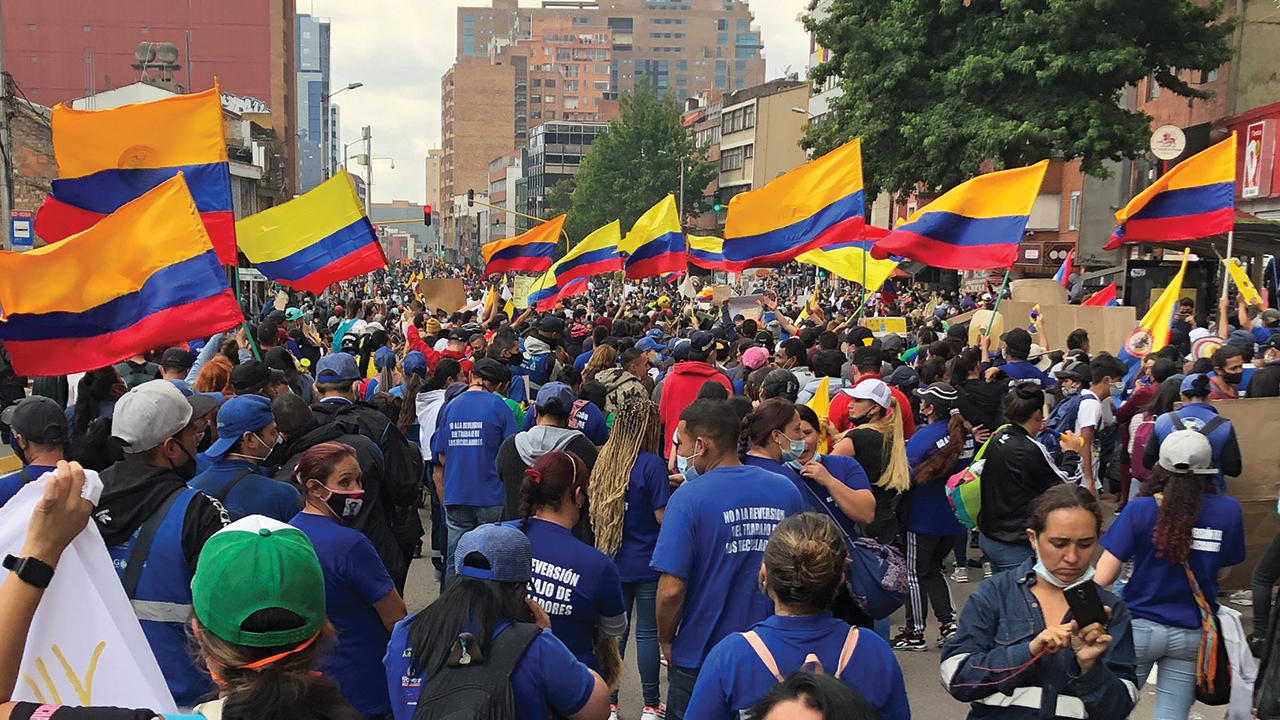 Mennonites in Colombia asked international siblings in faith for prayers in early May after a wave of protests and violence broke out across the country.

Demonstrations began on April 28, growing into a national movement by May 5 over a proposed tax law that would further repress small businesses and those living in economic insecurity already hardest hit by the pandemic. There are also new health-care and pension reforms that affect low-income families with new or expanded taxes. Many members of churches in Colombia marched with protesters to help ensure a peaceful demand for justice.

As protests grew, demands expanded beyond the right-wing government’s withdrawn tax reform to other social, political and economic grievances. Human rights groups raised concerns about excessive violence by riot police and other security forces. Protestors said police fired on crowds, and estimates of deaths were in the dozens.

Many of the reported deaths were in Cali, the city that became the center of anti-government protests against poverty and inequality. By May 10 there were reports of police allowing armed civilians to shoot protesters, especially Indigenous people blocking roads.

“There have been young people killed, policemen injured, places burned, military patrols and house searches in the poorest places, [which were] raided on the grounds that there are explosives or weapons,” wrote Yalile Caballero, president of the Colombian Mennonite Church, or IMCOL, in a Mennonite Church Canada release. “It is a time of chaos, uncertainty and much pain. Please keep us in your prayers.”

Levels of participation in demonstrations vary among the nation’s Mennonite churches. The Mennonite Church of Ibagué has taken part in nonviolent marches and protests.

José Antonio Vaca, a member of the church, said some members wanted to do something more than wishing their best and offering prayers.

“Inside our church we have a display with the call from Jesus to be on the side of the oppressed, never on the side of the oppressor,” he said, noting he was not speaking for the entire conference or congregation. “We had to take a side and join the people who are suffering the social, economic and political effects of the regime that governs us — a regime that for some of us is a regime of death that doesn’t look out for the well-being of those in need.

“In this context, we believe that Jesus invites us to take a side and take action.”

The Ibagué congregation has a relationships with the Human Rights Defense Committee of Tolima. In addition to marching with the group, the church has supported it financially and given it a space to meet in the building.

“We have to make changes where justice can be achieved peacefully, especially in our violent context in Colombia where for more than 60 years we have learned to respond to violence with more violence,” Vaca said. “We believe Jesus leads us to make peaceful changes.”

JustaPaz — IMCOL’s peace, justice and nonviolent action arm — has been documenting abuses and violence during protests. The organization reported that “massive displacements continue” among churches on the Pacific coast of Nariño. More than 50 families were affected by fighting between FARC dissidents and paramilitaries in La Tola and El Charco; two women from the churches were killed. JustaPaz has documented more than 5,000 displaced people in this region just this year.

Mennonite Mission Network worker Rebekah York marched with JustaPaz on May 5 in Bogotá in solidarity with protesters demanding the right to life, dignity and human flourishing.

She described “the sights and sounds that engulfed my senses”: “Whistles blowing; horns blaring; people shouting through muffled facemasks, ‘viva paro nacional’ (long live the national strike) and ‘el pueblo unido jamás será vencido’ (the people united will never be defeated); empty aluminum pots being clanked against each other in nonviolent protest; the vibrant primary colors of the Colombian flag never out of sight; people waving white flags of solidarity out apartment windows; the cacophony of stomping, singing and dancing.”

York wrote that Peter Stucky, pastor of Teusaquillo Mennonite Church, said Mennonites march because “like the resurrected Jesus with those on the road to Emmaus, we walk alongside people and reveal insights about Jesus and Scriptures.”

Mennonite Biblical Seminary of Colombia published a joint statement with JustaPaz urging “the government and civil society to pursue and deepen dialogue and negotiation on policies that will guide us toward equitable development, just peace and full respect for human rights.”