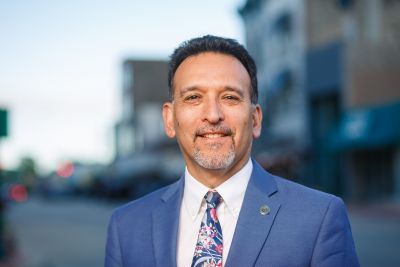 The dramatic growth of Latinos in the United States is no longer seen as reaching a tipping point; it is a seismic, demographic shift. Long immune to the increase of people moving northward, colleges and universities far away from the U.S.-Mexico border are welcoming Latinos to their college campuses. Goshen (Ind.) College has welcomed Latinos to its campus for decades.

Felipe Hinojosa, in his article “Educating ‘Hispano Hoosiers’ ” (Mennonite Quarterly Review, October 2012), says Latinos arrived at Goshen College in the 1930s and 1940s. David Castillo, a young Mexican-American Pentecostal pastor from Chicago, arrived at what was then called Goshen Seminary, to take Bible classes. Octavio Romero, a student recruited by Harold D. Miller, attended two years, went on to become a chemist and has since established a beneficiary trust fund that eventually will provide scholarships for Goshen students not yet born.

The 1950s and 1960s brought more Latinos to Goshen College and enrollment in the late ’70s and early ’80s hovered around 3 to 4 percent. The steady enrollment of Latinos throughout the ’80s and ’90s was due in part to the newly launched Hispanic Ministries program. Latino Mennonite pastors came from New York, Illinois, Texas, Oregon and other states.

In the early 2000s, Goshen closed the Hispanic Ministries program due to low enrollment. The recruitment model of inviting Latino pastors to move to Goshen stopped resonating with Latino congregations that had granted pastors the opportunity to move to Goshen for a period of time because some pastors did not return to their home congregations after completing their studies.

Then in 2006, the Lilly Endowment Fund awarded Goshen a $12.5 million grant to address issues of educational access of Latinos in higher education. The Center for Intercultural Teaching and Learning was launched, and intercultural transformation at Goshen was underway.

This intercultural transformation changed the campus climate through curricular change, enhanced student programming and affected the makeup of the Goshen College Board, where now two Puerto Ricans, a Mexican-American, two African-Americans and a Chinese-American serve as members. Latino leadership extends from the diversity modeled at the board level to the Latino Student Union, where student leaders are leading the way in supporting their peers who need assistance navigating adjustment to college life. Their weekly meetings are about planning student activities and strategizing how best to present their ideas to college administrators on building stronger relationships with Latino students.

The establishment of the Institute for Latino Educational Achievement also led to a three-volume study of migration patterns, educational attainment and makeup of Latinos in north central Indiana. From 2006 to 2016, the Latino student population at Goshen grew from 4 to 20 percent. In 2014, the incoming first-year class was 18 percent Latino, with the incoming first-year class reaching 30 percent Latino in 2016.

Since 2006, a total of 158 Latinos have graduated from Goshen, and close to 90 percent of these graduates have stayed within a 50-mile radius of Goshen. The college is leading the way among Indiana’s private colleges and public universities in retaining and graduating Latinos.

For decades, Latino dropout and college graduation rates have trailed other racial/ethnic groups and white students. What is not widely reported is that Latino high school students nationally are graduating at higher rates. The high school graduation rate for Latinos nationally is at an all-time high at 76.3 percent, while in Indiana, 82.3 percent of Latinos graduate from high school.

What has brought this change? Latino high school students are participating in advanced courses and participating in more extracurricular activities, giving them opportunities to obtain valuable skills when it comes to self-discipline and leadership opportunities. This has had a positive impact on the once downward trend of educational disparities experienced by Latinos. Subsequently, college-going rates have increased across the board and in communities of color.

The Education Trust reports that more than two-thirds of four-year, public colleges and universities have increased graduation rates in the last 10 years—not only overall (5.3 percent increase) but for underrepresented students as well (6.3 percent increase). Among underrepresented students, gains were greatest for Latinos (7.4 percent) and smallest for black students (4.4 percent). Native American students saw an increase of 6.4 percent.

This growing trend is being experienced at Goshen as well. If Latinos are graduating from high school at higher rates and many are enrolling in college, what universities are assisting Latinos in reaching their goal of graduating from college? President Lyndon B. Johnson, in his quest to usher in the Great Society, signed into U.S. law the Higher Education Act of 1965. With the passage of this legislation, Title III federal funds could be designated to Minority Serving Institutions (MSI). Four MSI categories eventually were created: Historic Black Colleges & Universities (HBCU), Hispanic- Serving Institutions (HSI), Tribal Colleges & Universities (TCU), and Asian American Pacific Islander-serving institutions (AAPI). In order to be designated one of the four MSIs, 25 percent of a total student population must be a specific racial or ethnic group.