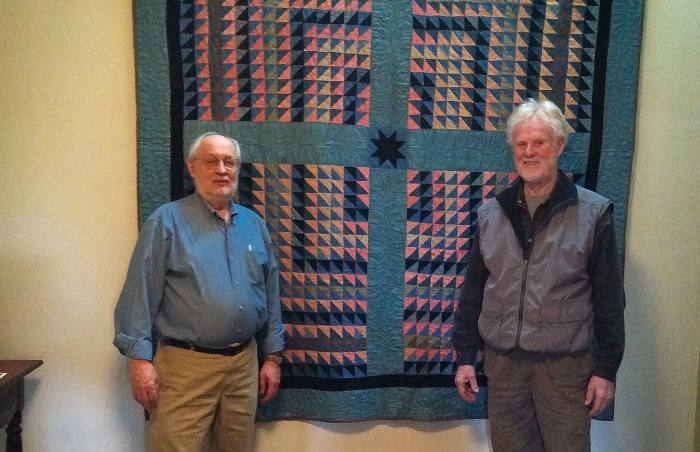 In 1989, David Pottinger moved from Honeyville, Indiana, to nearby Goshen, and began his many projects in downtown historic renovation. Prior to that, he was known nationally as a collector of antique quilts from the Amish communities in northern Indiana and central Illinois.

Three books were published about his collections, and hundreds of quilts were acquired by major U.S. museums, including the Museum of American Folk Art in New York City, the Indiana State Museum in Indianapolis, the Illinois State Museum in Springfield, and the Fort Wayne Museum of Art. In 1983, an exhibit of the Indiana quilts toured museums in the U.S. and Europe. The exhibit was especially popular in Zurich, Switzerland, the historic homeland of the Amish.

Goshen now has its own Pottinger collection of antique Amish quilts and other household antiques. Pottinger’s desire to keep part of the collection locally was fulfilled in December when generous donors presented 242 objects from his collection to the Mennonite Historical Library at Goshen College, which maintains a large collection of Mennonite and Amish museum items developed by the Mennonite-Amish Museum Committee.

Pottinger began buying Amish quilts in earnest in 1977, when he moved from Bloomfield Hills, Michigan, to Indiana, and he continued to do so until about 1996, when it became more difficult to find them.

His collecting years centered at the Honeyville Store, which he renovated and re-opened to serve the rural LaGrange County Amish community. Most of the Goshen College items came from a one-mile radius around Honeyville. Most date from 1900 to 1940, although one sewing caddy is dated 1853. The collection includes a number of local antique Mennonite items as well.

An exhibit drawn from the collection will appear in 2018 in the Hershberger Gallery in the Music Center at Goshen College. In conjunction with the exhibit, Pottinger will present an Afternoon Sabbatical program in 2018 at Goshen College about his collecting experiences.

The Mennonite-Amish Museum Committee sponsors two exhibits a year devoted to the history and arts of Anabaptist groups. Its next exhibit, “A Cabinet of Curiosities,” will open on March 26, 2017, in the Good Library Gallery, curated by Faye Peterson, Pottinger’s wife.