Paul Schrag of Mennonite World Review and Sheldon C. Good of The Mennonite 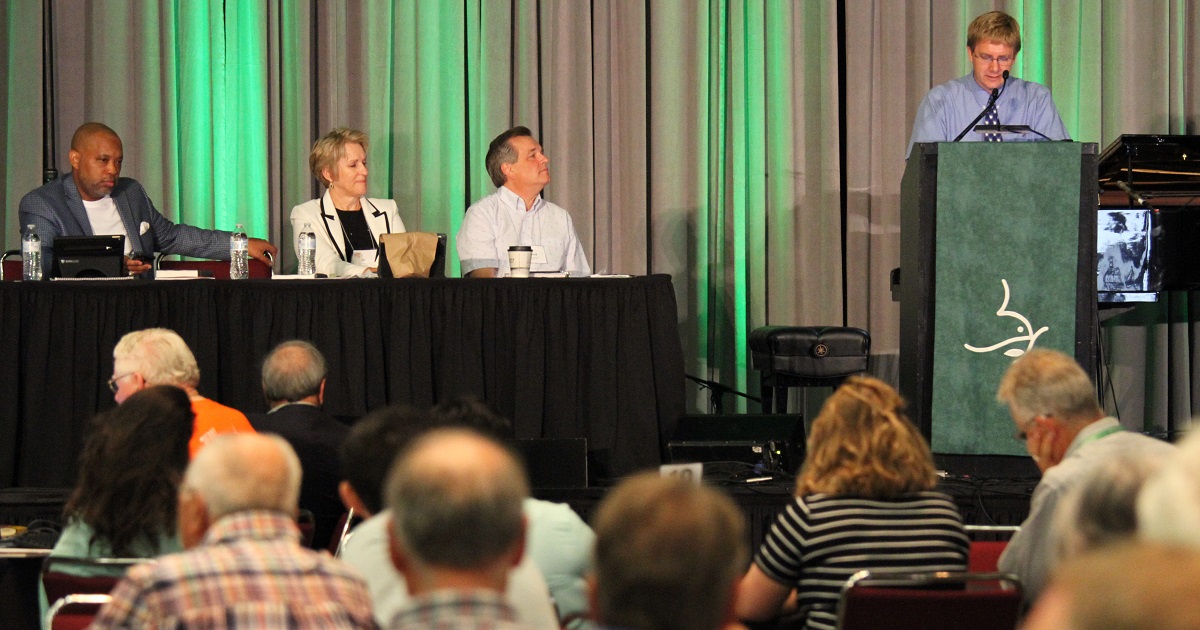 Mennonite Church USA delegates on July 6 passed a “Churchwide Statement on the Abuse of Child Migrants.”

A group of delegates initiated the statement during the convention, collecting the required 50 signatures and working with the resolutions committee to write it.

The resolution, which passed with two dissenting votes, condemns “the treatment of immigrants families and children at the border, as well as around the nation, [as] a horrific violation of the Image of God and God-given human rights.”

“We stand against the traumatic separation of families, the deprivation of basic human needs and the detention of migrants,” the resolution says.

It calls the denomination to “stand alongside the undocumented members of our denomination” and to “seek connections with immigrant communities in our contexts and to support those in sanctuary and the thousands of families whose loved ones have been deported.”

Guadalupe Aguilar of Brownsville, Texas, said he was not content with the resolution’s wording because he believed the church should name the separation of children from their families for what it is — kidnapping.

“How committed are we?” he asked. “Are we committed to sending more learning tours [to the U.S.-Mexico border]? We are past that. I suggest we go back to our congregations and ask what can we do. Don’t come to learn, come to help. We have to commit ourselves to helping these people.”

Others expressed support for the resolution and said they hoped people and congregations would find ways to take concrete action.

On July 4 The New York Times published an article describing fines being given by U.S. Immigration and Customs Enforcement (ICE) to migrants across the country. Two of the individuals mentioned in the article are living in sanctuary with Mennonite congregations: Edith Espinal at Columbus (Ohio) Mennonite Church and Rosa Ortez-Cruz at the Church of Reconciliation in Chapel Hill, North Carolina, also the meeting site of Chapel Hill Mennonite Fellowship.

ICE fined Espinal $497,777 because she had “willfully” refused to leave the United States and had “connived or conspired” to prevent her deportation, an ICE letter says, according to the New York Times article. ICE fined Ortez-Cruz $314,007, the article says.

Sonya Stauffer Kurtz of Souderton, Pennsylvania, encouraged church leadership “to let us know of financial needs related to these fines.”