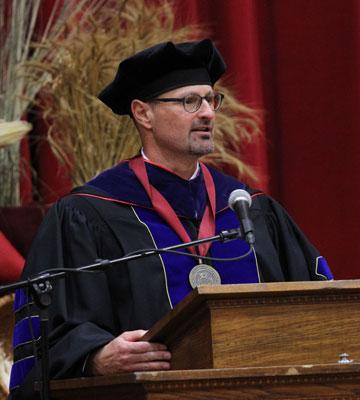 The Bethel College community celebrated the inauguration of Dr. Jonathan C. Gering as the college’s 15th president in a ceremony that was combined with the annual Fall Festival worship service. Gering began as president on Jan. 29.

Campus pastor Peter Goerzen, in his welcome at the event held Oct. 7 at the college’s Memorial Hall in North Newton, Kansas, invoked an agrarian metaphor. He said the gathering would “celebrate and acknowledge President Gering’s numerous gifts and accomplishments, his character and capabilities, the deep roots and careful cultivation that have prepared him for this role, and which he now offers in service and leadership to this institution.”

In the invocation prayer, Dawn Yoder Harms, pastor of Bethel College Mennonite Church, expressed gratitude to God for “seeds planted along the way [of the college’s 131-year history], for growth nurtured, and for the harvest of knowledge, wisdom and faithfulness to your way of peace, justice and love, gathered up in this place and shared with the world.”

Gering, in his speech, noted that he “never intended or set out to be a college president.”

“I know very few among us who have,” he said.

His goals as he completed his undergraduate work in biology at Bethel College were, he said, to earn master’s and Ph.D. degrees, attain a faculty position at a liberal arts college, teach and complete original research, earn tenure and make full professor.

He did that and then moved into administration at Truman State University in Kirksville, Missouri. Then, during what he called “a period of quiet reflection” during a sabbatical, “a skill surfaced” that he said he believes started in childhood, probably through growing up on a farm: listening.

He had to listen to the animals to understand what they were trying to communicate, and to the machinery when working in the fields of dryland wheat to know if all was going as it should.

When he began studying biology, first frogs and toads in Kansas and later insects, he learned that the only way to tell species apart when you can’t look at them is to listen to the sounds they make.

“I’m here today not because I planned, but because I listened – to the search committee members, to important mentors, to friends, to immediate family, to my in-laws,” he said.

As he closed, Gering referenced The Wheat Album, a gift from his maternal grandfather, which chronicles and illustrates progress and modernization in wheat harvesting and threshing from the early 1800s to the mid-1900s.

“Harvest has become faster, easier, safer and more efficient,” he said. “Fundamentally, though, the [goal remains] the same: the seed, those kernels, must be removed from the husk. So it is with the educational process here at Bethel. We can always retain the core purpose of the education, while accommodating the waves of human progress that advance around us.”