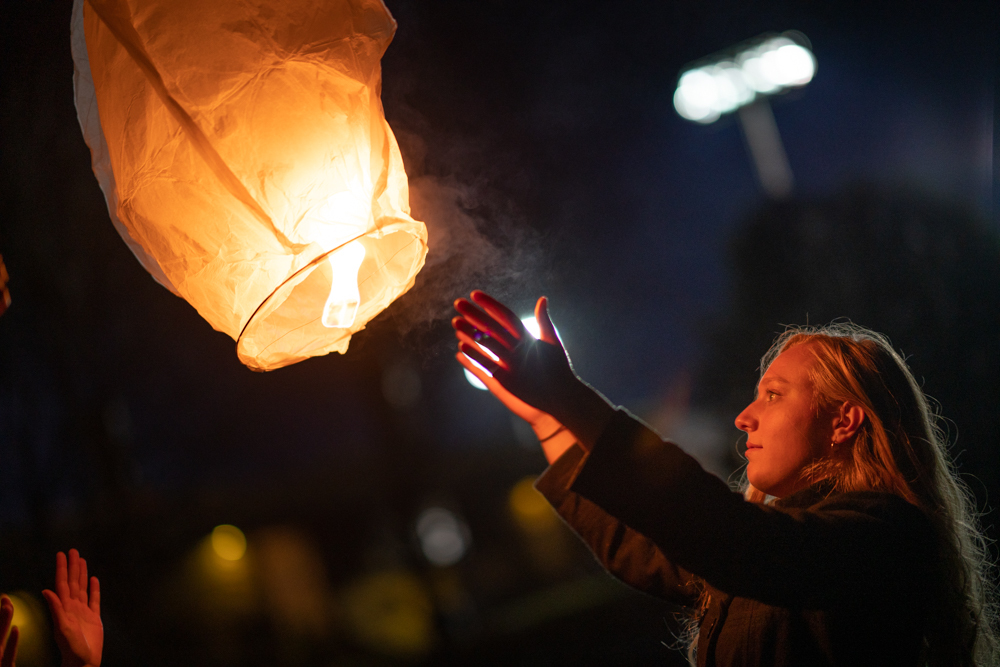 Students from the fall semester’s anatomy lab and the Pre-SOMA graduate club held a memorial service to celebrate and honor the deaths of the body donors who gave their bodies to science. The students had spent the semester disecting the cadavers and learning from them. The students and professor Julia Halterman met in SC106 to share reflections and sing a song then moved out to the practice soccer field where a prayer was said and lanterns were released. Photos by Macson McGuigan/EMU.

Photo: Undergraduate anatomy students lit and released paper lanterns as part of a memorial service for the four cadavers they dissected and studied this semester. Photo by Macson McGuigan.

Paper lanterns rose into the night sky in early December behind the Suter Science Center at Eastern Mennonite University in Harrisonburg, Virginia. The 16 students who released them gathered to honor those who had donated their bodies to science, providing the EMU anatomy lab with cadavers to study.

“Most likely, tonight, there are people out there missing them,” professor Julia Halterman said, opening the memorial. But this service was very different from a funeral, she explained, as “we celebrate how we have learned from them in their death.”

They only know the cadavers’ first names: Anna, Jeane, Richard and Earl. Yet several students referred to them as their “silent teachers.” They made surprising discoveries, in some cases—one of the men had three lobes in his left lung, making him one of just 3% of people with the condition.

Students shared reflections on and gratitude for the dissection experience. They sang “Amazing Grace,” with classmates Caroline Lehman on violin and Jonathan Nielsen on baritone saxophone before trekking out into the cold to release the lanterns.

“Her sacrifice allowed me to learn and grow,” one student said. “I pray that you all rest peacefully.”

“In so many classes, we just learn the theoretical concepts,” another student said. He enjoyed getting to “pass on” the gift of his donor’s sacrifice by leading prosections with underclassmen.

Another was thankful that someone would choose “for a student somewhere to get to experience this.”

Krystalee Revanna, a second-year graduate student in the MS in Biomedicine program, helped organize the memorial service. A teaching assistant for the anatomy classes, she is also a leader of EMU’s Pre-Students of Osteopathic Medicine Club, which hosted a suture clinic immediately prior to the service. In one of their last interactions with the cadavers this semester, students practiced suturing skills.

“Honoring our donors for the first time was a special experience,” Ravenna said. “I hope this is a tribute that continues long after I graduate. Having students tell me they now feel closure truly touched me. Our donors gave us a learning opportunity in the lab, but more importantly, they taught us the importance of humility.”

The anatomy lab is only offered in the fall. The cadavers will remain at EMU through the spring semester to be used by neuropsychology and lower-level anatomy and physiology students.

Their bodies will then be transported to Kyger Funeral Home in Harrisonburg for cremation, and their ashes sent to the donors’ families, Halterman said.